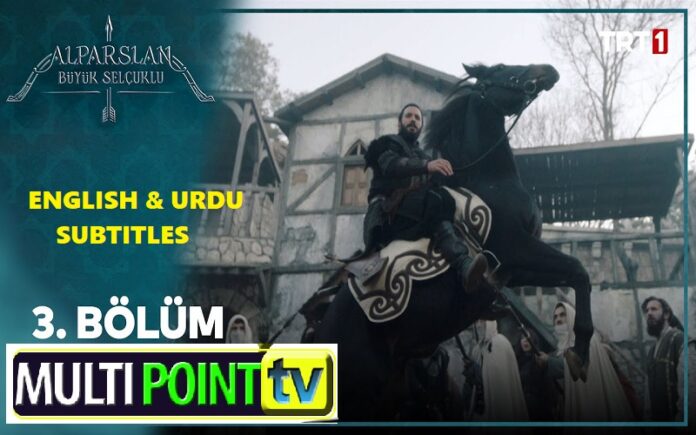 In Great Seljuks Alp Arslan Episode 3, Alparslan kills the Byzantine Lord who attacked him and the war between the two states begins. The Byzantine army tries to stop the Turks. Although the Turkish army is small in number, it manages to resist the Byzantine army. Prince Liparit is captured by the Turks during the war. Diogenes and the General realize that they will lose the war. Akca sees a snake under Caghri’s pillow and kills it. Karaca thinks that Akca is trying to kill Caghri and immediately calls the soldiers. Akca pretends to save Caghri’s life even though she put the snake on the edge of the bed herself and gains the trust of the people in the tribe. Akca then goes to the forest and receives the secret message sent by Kekaumenos. It turns out that Akca is actually a Christian spy working for Byzantium.

The general realizes that they will lose the war and orders his surviving soldiers to retreat. The Turks then begin to celebrate the victory. Alparslan and other soldiers come to the palace to give the news of the victory to the Sultan. Sultan congratulates everyone and allows Alparslan to go to his tent. The general returns to the castle and tells the Lord what happened in the war. Inal thinks that some lands will now be under his control because of what he did in the war. Akca goes to the forest to prepare medicine and gets milk from a wolf. Alparslan sees her in the forest and then they return to the tribe together. Yannis goes to the castle in Vaspurakan and begins to torture the Turks there. Karaca continues to watch Akca from afar and thinks that she is a wizard.

Alparslan first tells everyone in the tribe and then his father that they won the war. Akca begins to prepare medicine for Caghri. Akca goes to Caghri’s tent once again and says that she has prepared medicine for him, but Karaca starts shouting at her. Karaca says that Akca is doing secret things, but Selcan slaps her for the rude words she said. Tughrul begins to eat with the heroes who participated in the war. While Sultan is saying that Alparslan fought like a hero, the vizier begins to praise Inal. Tughrul says that from now on, only the Sultan will rule the state and the Beys will no longer have an independent land. To get Liparit back, General sends Diogenes to the Turkish palace and asks him to make a deal. Inal gets angry because he can’t get the power he wants. Bozan comes to the palace and says that he killed the traitor. Sultan gets angry with Alparslan for hiding this information.

Alparslan says that the traitor they are looking for is not dead yet, but the Sultan asks him to stop this investigation. The Sultan’s vizier begins to state the terms of the peace treaty. Diogenes says that the Byzantine Emperor will accept everything except the annual tax, and the Sultan then approves the agreement. Alparslan takes Liparit and sets out to go to Ani Castle. Diogenes returns to Ani and tells everyone the terms of the peace treaty. Akca goes back to the forest and receives another secret message, but in the meantime, Suleiman arrives. Akca drops her necklace there and returns to the tribe. Some bandits attack the soldiers carrying Liparit, but Alparslan stops this attack. Alparslan examines the dead bodies of the attackers and realizes that the real traitor is still alive. Akca returns to the forest to get her necklace, but cannot find it.

Akca returns to the tribe and goes to Caghri’s tent once again. Caghri thanks Akca for curing his illness. Alparslan goes to Ani Castle with Liparit and says that he has remained faithful to the agreement. Lord gives a chest of gold to Alparslan and says that the Muslim Turks in Vaspurakan will be released soon. General kills Liparit and later sees Diogenes talking to Evdokya. General wants Diogenes to be the new governor of Vaspurakan instead of Tortunel. The Lord rejects this offer and tells Yannis to become governor. Lord makes Diogenes the commander of the soldiers in the castle and asks him to work with Yannis. Alparslan brings the gold he bought from Ani to his father. While Akca is singing, Hassan sees her and talks to him for a while.

Suleiman talks to Karaca and learns what happened in the tribe. Alparslan then tells his father that he still suspects Bozan. Karaca hears what is being said in the tent and talks to Suleiman. Suleiman gets angry with Alparslan for his accusations against Bozan, but Caghri stops his sons. That night, Diogenes goes to Yannis’ room and congratulates him on his new assignment. Diogenes says something about the Turks who will leave Vaspurakan. Yannis comes up with a plan and sneaks into one of the rooms in the castle. Yannis sends a message to his father’s alliance on the eastern border. Meanwhile, Diogenes’ assistant takes Yannis’ medal from his room. Bozan receives Yannis’ message, but he thinks the Lord sent it. The next day, Karaca talks to Akca and begins to lie about her. Members of the tribe are disturbed by this event.

Alparslan goes to a place in the forest to meet the Turks coming from Vaspurakan and starts to wait there. While the Turks are going to the meeting place with the Byzantine soldiers, some bandits start to attack. The bandits kill everyone on the way and flee from there. Yannis wanders among the dead bodies and is happy that the Turks are not free. Shortly after, Diogenes arrives and puts Yannis’ medal in the hands of one of the dead people. After waiting for a long time, Alparslan senses that something is wrong and starts looking for the Turks. While Akca is trying to understand why Karaca behaved like this, she returns to her tent and sees that her necklace, which she lost in the forest, is on her pillow. Akca starts to think about who brought this necklace, but Hassan comes after a short time. While Akca is listening to Hassan, she remembers her childhood. Akca is actually a Turk who was kidnapped by the Lord years ago, and she came to the tribe to find her real father. Akca realizes that her father is Hassan. Alparslan sees the killed Turks and thinks that Yannis did it.

Great Seljuks Alp Arslan Episode 3 will on air on 22nd November 2021. If you feel irritated because of the ad breaks and some other issues, then ads-free permanent access for watching Great Seljuks Alp Arslan Episode 3 English subtitles can be achieved by subscribing membership at multipointtv.com by Clicking below blue colored button. you can also download the episode to watch on Big screen TV in 1080 resolution.