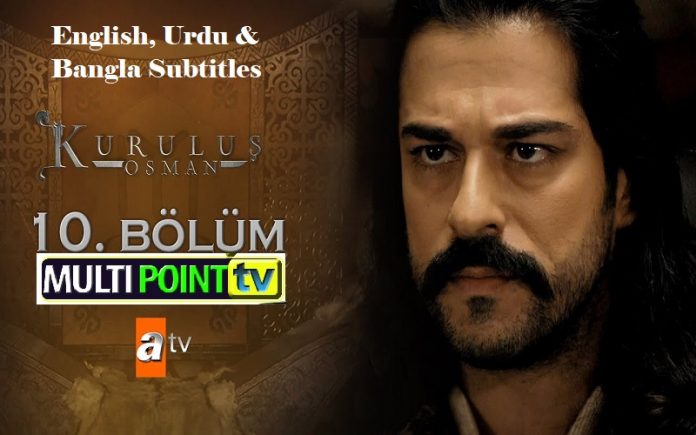 Alisar Bey and his soldiers come to Kayi plain and want to arrest Osman Bey. This event increases the tension in the Kayi plain. Gunduz Bey and Selcan Hatun object to this. Alisar Bey tells what he learned in the castle, but Dundar Bey does not deliver Osman Bey to him. Meanwhile, there is a debate between the soldiers and the soldiers of Alisar Bey outside the tent. Alisar Bey says it will be a fair trial, but Osman Bey says he wants to talk to Sophia face to face. Later, Osman Bey delivers his sword and goes with Alisar Bey. Sheikh Edebali tells a story about Hazrat Hamzah and Bala Hatun listens to it. Salvador says he wants to be a Muslim, but Bamsi Alp does not believe him. Salvador says that if Bamsi Alp does not kill him, he will be his son until the end of his life. Princess Sophia is still angry and together with Yannis, they make revenge plans. Samsa Bey and the Alps take Osman Bey from the soldiers of Alisar Bey. Salvador tells Shadada and becomes a Muslim. Osman Bey and his Alps plan to seize the gold that will come from Konya to Alisar Bey.

Osman Bey and the Alps come back to the plain and talk about the sunnah of Salvador. Bamsi Bey changes Salvador’s name to Abu Bakr Siddiq. Osman Bey decided to distribute the gold from Mongols to the poor. Boran Alp sings after dinner. Bala Hatun is very upset because she does not listen to her father’s word. Alisar Bey learns that Princess Sophia has fled and questions his soldiers. Nobody can explain how Princess Sophia escaped. Later, Alisar Bey remembers what the astrologer said and orders his soldiers to bring him to the mansion. Dundar Bey does not want Aygul to marry Alisar Bey and plans to bring a new order to the plain at the meeting to be held the next day. Osman Bey and Selcan Hatun talk about Aygul’s marriage decision and think about how they can change it. Osman Bey believes that Sheikh Edebali will change his mind one day and will wait for Bala Hatun. Dundar Bey begins to speak at the meeting and distributes the tasks in the plain. Gunduz Bey will be responsible for the commercial and monetary affairs of the plain. Batur Alp will be the head of the Alps. And Osman Bey will be Dundar Bey’s deputy chief. Alisar Bey gives his men gold and asks them to kill the Kayi where they see them.

Gunduz Bey prepares to go to the market and sets off. Meanwhile, Samsa Bey and the other Alps distribute the gold they receive from the Mongols to the poor. Osman Bey takes his horse and goes to a tree. Osman Bey tells his secret to his horse and says that when the time comes, he will bring justice to the world without giving up the words of Allah. Alisar Bey once again visits Sheikh Edebali in his shop. Alisar Bey offers a partnership to Sheikh Edebali. Osman Bey returns to the plain and talks to Dundar Bey about the future of the plain. Dundar Bey says he will not give Aygul to Alisar Bey. Sheikh Edebali asks what Alisar Bey wants for this partnership. Alisar Bey says he wants to marry Bala Hatun. Dundar Bey tells that he promised to Alisar Bey and says that he wants to give Aygul to Osman Bey for the future of the Kayi plain. Gunduz Bey and the Alps stop by a river to rest. Meanwhile, soldiers sent by Alisar Bey suddenly attack Gunduz Bey and injure him seriously.

After the soldiers fled, the Alps brought Gunduz Bey back to the plain. Zohre Hatun comes to Selcan Hatun and tells that Aygul should marry Osman Bey in order to be saved. When Osman Bey responds to Dundar’s offer, he learns that his brother, Gunduz Bey, came to the plain with injuries. Gunduz Bey is seriously injured and everyone thinks he is dead. Sheikh Edebali says that his daughter Bala is not suitable for Alisar Bey and does not approve of this marriage. Zohre Hatun says that Gunduz Bey is not dead and removes the arrows on his body. Batur Alp says that the castle did this, but Osman Bey objects to this. Osman Bey understands what Alisar Bey did and set out to ambush.

If you feel irritated because of the ad breaks and some other issues, then ads-free permanent access for watching Kurulus Osman episode 10 with English subtitles can be achieved by subscribing membership at multipointtv.com by Clicking below blue colored button. you can also download the episode to watch on Big screen TV in 1080 resolution.