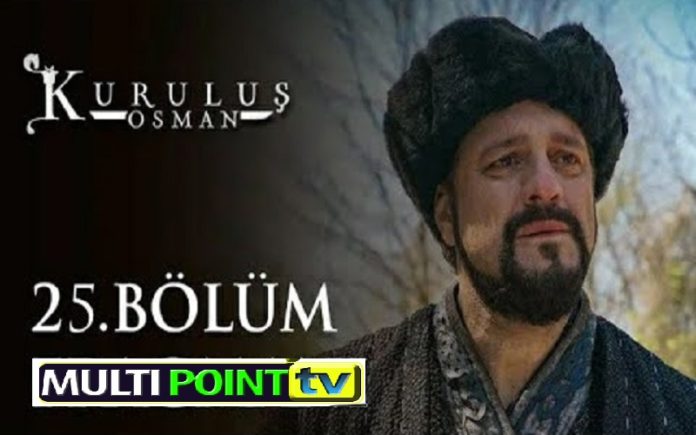 In Kurulus Osman Episode 24, Byzantine soldiers try to catch Princess Sofia. Sofia kills soldiers sent by the emperor in the forest. Osman Bey and Bala Hatun talk to each other. Aygul dreams of her brother Batur and thinks he is really alive. Zohre goes to Aygul and realizes that she is acting strangely. Aygul tries to cook by using the soil. Zohre tells that Batur will not come back, but Aygul does not believe in her mother. Zohre tells once again that Batur is dead. Aygul does not accept the truth. Zohre begins to cry and tries to calm Aygul. Aygul gets angry and tries to strangle her mother. Zohre slaps Aygul and saves herself. Osman Bey and Bala Hatun sit under a tree. Osman Bey takes Bala’s hand and talks about the future. Bala says she will support Osman Bey as much as she can, but she does not know if she can give him a child. Osman Bey says that Allah knows the best of all and will have children in the future. Osman Bey and Bala stand up. Osman Bey says that Turkish tribes will unite in the future and establish a blessed state. (Who was Mehmed 1 | 5th Sultan of Ottoman Empire | Mehmed First | Father of Muard II | Sultan Mehmed)

In Kurulus Osman Episode 24, Dundar Bey sits in front of the tent and watches Aygul. Aygul shows her flowers to her mother and tells them that she collected them together with Batur. Aygul’s actions and words make her father cry. Zohre asks how they can heal Aygul. Dundar says that Gunduz Bey is looking for a good doctor. Zohre says that her husband should eat, but Dundar says he is very upset about what happened. Meanwhile, Hazal Hatun comes to the plain. Cerkutay goes to talk to Subutay. Subutay says he wants to talk to Balgay and asks him for his location. Cerkutay tells that he will not betray Balgay. Subutay puts his sword in the throat of Cerkutay and threatens him. While Zohre brings food to Dundar, she sees Hazal is coming to the plain and drops the food from her hands. Hazal goes to Dundar and talks to him. Hazal later says that she is upset about what happened. Gunduz and Bamsi see Hazal came. Gunduz Bey says welcome to Hazal. Bahadir comes to his mother Hazal. Hazal wants to give the gold sent by her brother to Gunduz, but Gunduz does not accept it. Selcan Hatun welcomes Hazal and talks to her. Hazal says she will stay for a while. Princess Sofia returns to the castle and Salvador meets her. Sofia says that the soldiers of the emperor are after her and it will be dangerous to leave the castle.

In Kurulus Osman Episode 24, Salvador says he will take all precautions, but Princess Sofia says this will be insufficient. Sofia says that the only power to protect her from the emperor is the Kayi tribe. Sofia sends Salvador to the Kayi plain and says she wants to make an alliance with them. Sofia is ready to do anything for the establishment of this alliance and will accept all the terms of Osman Bey. Hazal Hatun asks where Osman Bey is. Gunduz Bey says that Osman Bey is making wedding preparations. Meanwhile, Osman Bey and Bala come to the plain. Bala kisses Hazal Hatun’s hand. Hazal tells Bahadir that she has come to the plain because of what happened. Hazal says that Bahadir should not be blamed for the crimes of Alisar. After Salvador leaves the castle, Sofia tells Helen why she did such a thing. Sofia says she wants to save time until Geyhatu Khan comes to Sogut. Hazal says that Bahadir made a mistake but did not betray. Osman Bey says that Ertugrul Bey will make the best decision about Bahadir. Hazal listens to Osman Bey but says that Bahadir’s uncles will not accept the decisions that mean his life. Osman Bey says that he does not want to hurt Hazal, but nobody should be involved. Osman Bey invites everyone to his wedding and leaves. Cerkutay brings Subutay to Balgay’s secret place. Subutay takes food from the plate of Balgay and starts eating.

In Kurulus Osman Episode 24, Subutay and Balgay start talking about Geyhatu Khan. Subutay says that the soldiers died who suppose to help Balgay. Balgay gets angry and pulls his sword. Subutay says that Balgay is still valuable for Geyhatu and that he must surrender Osman Bey. A monk named Alexis comes to talk to Sofia and tells that he is upset about what happened to Yannis. Princess Sofia says that Dundar’s daughter was sick and that they were looking for a doctor. Alexis says he’s not a doctor, but Sofia says she needs a magician and gives him a potion. Selcan and Osman Bey talk about Hazal. Osman Bey thinks that Hazal came because of something else. Zohre goes to Hazal and talks to her. Hazal assigns someone to follow Zohre. Kongar and Balgay practice sword fight and talk about Osman Bey. Balgay sends Cerkutay to Osman Bey and asks him to tell him that they are ready to fight Geyhatu. According to Balgay’s plan, while Osman Bey is preparing for the wedding, Cerkutay will kill him. Konur and Boran make a bet on who will win the race in the evening. Abdurrahman Ghazi and Bamsi Bey talk about the wedding of Osman Bey. Meanwhile, Salvador comes to the plain.

In Kurulus Osman Episode 24, Aygul comes while Selcan Hatun and Bala are cooking for the wedding. Aygul’s condition is getting worse and she starts to think she has a baby. Salvador tells Osman Bey and Gunduz Bey that Princess Sofia wants to make an alliance. Osman Bey thinks that Sofia has other plans. Bamsi opposes this alliance. Osman Bey realizes that Sofia has made this plan to save time and says he has conditions for the alliance. Osman Bey asks Sofia to announce that he is the owner of the castle, come to the plain and surrender, and become a Muslim and marry Konur. Salvador sets out to go to the castle. The doctor sent by Sofia comes to the plain and talks to Dundar Bey. Kongar follows Cerkutay to prevent him from killing Osman and fights with him. The fake doctor examines Aygul and gives Zohre medicine. The doctor says he wants to talk to Zohre about another topic. Mongolian soldiers try to stop Kongar. Balgay comes and hits Kongar with a poison arrow. Balgay forcibly drinks a drug into Kongar. The doctor says that Sofia sent him and gives her a poison to feed the goats. Those who eat goats with this poison will die.

In Kurulus Osman Episode 24, Osman Bey and his friends compete for carrying goats. Osman Bey wins the race. Hazal Hatun and Dundar Bey talk alone in a quiet place. Dundar says he is sad. Hazal tries to improve the morale of Dundar. The fake doctor returns to the castle and says he has completed his mission. Princess Sofia says that she will take revenge on Yannis that night and turn the plain of Kayi into a cemetery. Selcan Hatun chooses the goats to be cooked for dinner. Then Zohre secretly goes to these goats and gives them poisonous food. That evening Osman Bey’s wedding begins in accordance with Turkish traditions. Osman Bey dances for Bala Hatun. Bamsi reads poems before eating. Dundar Bey does not go to the wedding and thinks about his mistakes. Osman Bey orders to sing songs.

In Kurulus Osman Episode 24, Gunduz Bey talks to Sheikh Edebali and asks him to pray. Sheikh Edebali prays to Allah. Sheikh Edebali prays to be fair, compassionate, and successful in the Alps. Aygul goes to her father and tells that they should go to Osman Bey’s wedding. Dundar accepts his daughter’s request and goes to the wedding together. Osman Bey gets up and says welcome to his uncle. Hazal realizes that Zohre is restless, but Zohre denies this. Everyone gets cooked goat meat. Zohre pours a drink on Aygul and gets off the table. Zohre tells Dundar to come with them. When Osman Bey is about to start eating, Hazal Hatun stops everyone and tells that no one should eat goat meat. Osman Bey asks what happened. Hazal says that the traitor Zohre poisoned the food. Zohre claims that Hazal is lying. Then Hazal asks Zohre to eat goat meat. Zohre does not eat meat and attacks Hazal suddenly. Hazal stops Zohre and cuts her throat. Zohre dies. Gunduz Bey gets angry with Hazal, but Hazal says she knows everything. Osman Bey asks why Hazal has not told the truth before. Hazal says that everyone owes their lives to her.