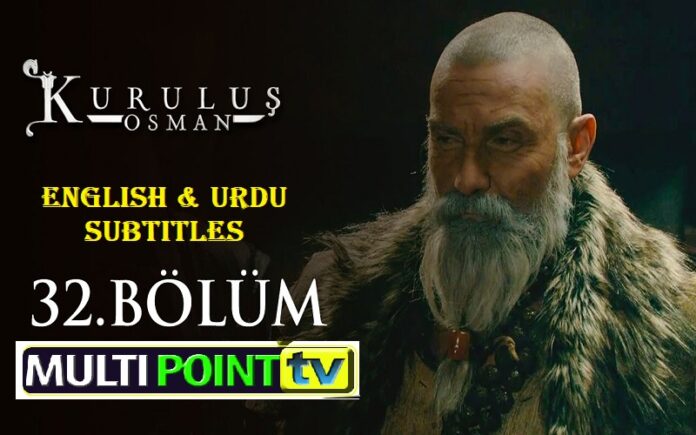 In Kurulus Osman Episode 31, Mongolian soldiers under the leadership of Geyhatu arrive at the place Cerkutay showed. Cerkutay shows the Mongolian soldiers killed by Osman Bey to Geyhatu and says they will take Monke back. When Geyhatu heard Osman’s name, he became very angry and prayed for his dead soldiers. Ertugrul Bey and Dundar Bey talk about the deal with Nikola. Ertugrul Bey says that the agreement to be made will delay Nikola until he sends Geyhatu and sends Dundar as an ambassador. Before Dundar Bey leaves, he asks Ertugrul Bey why he treated Osman like that. Meanwhile, Osman Bey and the Alps compete in an arrow shooting competition. All the arrows shot by Osman Bey hit the target. Savci Bey prepares for his father’s assignment and talks to his wife Lena before he leaves. Ertugrul Bey comes out of his tent and holds a ceremony for those who will go on duty. Ertugrul Bey tells Savci Bey that he has to find a way to stop Geyhatu and gives him the Kayi flag. Osman Bey tells his brother Savci to be careful and hugs him. After Savci Bey leaves the plain, Boran comes and tells Osman that the horses are ready for the journey. Osman Bey takes some Alps with him and sets out to go from the plain in secret.

In Kurulus Osman Episode 31, Bala Hatun comes to Osman Bey and tells him to be careful. Osman Bey follows Savci and his Alps as they go to talk to Geyhatu. Dundar Bey goes to the Byzantine castle to talk to Nikola. Dundar Bey says that Nikola is doing dangerous work and wants to talk about the trade deal. Nikola asks why Ertugrul wasn’t coming and says he knows that Geyhatu is coming. While Osman Bey tries to follow his brother, Savci notices him and stops Osman. Savci Bey asks his brother what he is doing. Osman Bey tells his brother that he is coming to help and asks permission to go with him. Savci Bey says that Ertugrul Bey does not allow this and tries to stop Osman. Osman Bey says he caused everything himself and wanted to fix all the problems. Savci Bey says he does not want to argue with his father, Ertugrul, and opposes Osman once again. Osman Bey tells that he wants to tell all the facts to Geyhatu and that he will not go back to the plain. Dundar Bey blames Nikola for what happened in Sogut, but Nikola tells him what Savci did. Nikola says that he does not trust the Turks because of what Osman did. Dundar says he has a deal for peace, but Nikola asks for retaliation. Savci Bey asks his soldiers to arrest Osman. After what Dundar said, Nikola signs the agreement. Osman stops the soldiers trying to arrest him and once again says he wants to talk to Geyhatu. Savci Bey says that Ertugrul Bey wants to protect Osman. Osman learns that Geyhatu thinks he is the person who kidnapped Monke. While the two brothers argue, Ertugrul Bey arrives and stops them.

In Kurulus Osman Episode 31, Ertugrul Bey gets angry with what Osman Bey did and orders him to go back to the plain. Osman Bey takes the Alps and returns. Bala and Lena argue, but Hazal stops them. Meanwhile, Osman Bey comes. Bala tries to calm Osman Bey. While Nikola is painting, Flatyos arrives and says he is angry about the trade deal. Nikola says he made this deal for a better future and tells Flatyos his secret plan. Osman Bey takes his horse again and sees Kumral Abdal while wandering in the forest. Osman Bey says he is worried about his brother Savci’s life, but Kumral Abdal does not believe him. Osman Bey asks for help from Abdal and asks the location of Geyhatu’s headquarters. That night, Savci Bey reaches Geyhatu’s headquarters. One of the Mongolian soldiers attacks the Kayi flag, but Savci Bey stops that soldier. Geyhatu comes out of his tent and asks the Savci who he is. Geyhatu then orders the soldiers to kill the Turks. Ertugrul Bey asks where Osman is, but no one can answer him. While Hazal and Lena are talking, Osman will come to dinner late. Ertugrul Bey asks Dundar what he talked to Nikola about. Savci Bey says he knows where Monke is and thus saves his life. Geyhatu calls Savci to his tent.

In Kurulus Osman Episode 31, Dundar Bey says that Nikola has spies everywhere. Osman Bey says they shouldn’t trust Nikola. Dundar Bey says that Osman is right and continues to listen to Osman. Osman says they should push Nikola even more when he is in a difficult situation. Ertugrul Bey tells Osman to be careful and begins to eat. Savci Bey tells that Monke is alive. Geyhatu does not believe Savci Bey. Savci Bey says that those who kidnapped Monke wanted to kill Geyhatu. Geyhatu starts to listen to Savci even more carefully. Savci says Osman is not guilty and asks Geyhatu to take three days to bring Monke. Savci Bey warns Geyhatu and says that this was done to hide a throne fight between the Mongols. Geyhatu listens to Savci Bey and gives him three days. Savci takes the Alps and returns. There is a cave in a secret place in the forest. In this cave, Bamsi lives away from everyone. Bamsi reads and prepares for a long time in this cave. Bamsi now realizes that it is time to make his dreams come true, and he walks out of the cave. Lena and Gonca make medicine day and night for the plague epidemic and heal people. Lena sees Flatyos and leaves the church where they treat the patients. Flatyos follows Lena, but Lena catches him.

In Kurulus Osman Episode 31, As Savci Bey returns to the plain, a few thugs attack them, but Savci Bey stops the attackers. Flatyos says he still loves Lena and tells her to return to Byzantium. Lena warns Flatyos and leaves the market. Savci Bey asks the bandits they caught where Monke is. One of the bandits says that Monke was held in one of the unused ports. There is a fight in the Sogut market. Goktug stops the Byzantine soldiers. Dundar comes and asks what’s going on. Byzantine soldiers and a merchant blame Goktug. Goktug says they lied, but Flatyos recalls the peace deal made. Flatyos speaks the retaliation clause in the deal and blames Goktug. Dundar sends Goktug to the dungeon. Osman Bey learns what Goktug has done in Sogut and immediately goes to his father’s tent. Osman Bey asks his father what will happen now. Ertugrul Bey gets angry because Osman cannot control Goktug and says that the necessary will be done. Osman Bey cannot accept this decision by Ertugrul. Ertugrul says that Osman’s soldiers broke the plan he made. Osman approaches his father closely and says that he can no longer recognize him. Ertugrul Bey tells his son Osman not to get involved. Osman Bey asks how he made a mistake and fell out of favor with his father, but he cannot get an answer.

In Kurulus Osman Episode 31, Flatyos comes to the castle excitedly and says that Goktug has fallen into the trap they set up. Nikola immediately orders the Byzantine spies to go to Sogut. Osman and Boran meet in the forest and plot to kidnap Goktug from the dungeon. Boran says that Nikola and Flatyos will come to Sogut. Savci Bey and the Alps go secretly to the dungeon where Monke was held captive and they try to kidnap him. Abdurrahman Ghazi disguised and sneaked Goktug out of the dungeon. Goktug realizes that everything is Ertugrul’s plan and sets out to find Osman. Flatyos and Nikola come to Sogut. Savci Bey eventually finds Monke and fights the bandits with him. Nikola tells that the Turks are guilty of what happened in Sogut and goes to Ertugrul’s room. Flatyos and the spies begin to follow Osman. Ertugrul Bey says he is sorry for the dead Byzantine soldier. When Nikola says that Goktug must die, an Alp arrives and tells him that Goktug has escaped. Monke stops fighting the bandits and stabs Savci Bey in the back. Everything turns out to be a trap in fact that Monke was not kidnapped. Savci falls into the trap of Yavlak Arslan. Flatyos’ spies shoot Osman Bey’s horse with an arrow and attack him. Osman kills the spies who came to capture him and escapes deep into the forest. Nikola asks Ertugrul Bey what happened, but Ertugrul tells him a story. Nikola can’t take any longer and he wants Goktug from Ertugrul or the Byzantine soldiers will attack. Ertugrul Bey says that when the time comes, Goktug will be tried in front of everyone. Flatyos and his spies continue to chase Osman Bey. Flatyos says that Osman kidnapped Goktug and asks Goktug back. As the Byzantine spies are about to capture Osman, Bamsi comes and saves Osman.

Kurulus Osman Episode 32 will on air on 4th November 2020. If you feel irritated because of the ad breaks and some other issues, then ads-free permanent access for watching Kurulus Osman episode 32 with English subtitles can be achieved by subscribing membership at multipointtv.com by Clicking below blue colored button. you can also download the episode to watch on Big screen TV in 1080 resolution. 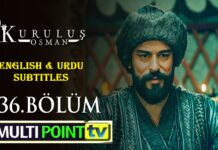 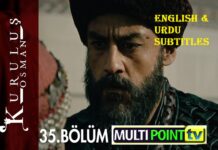 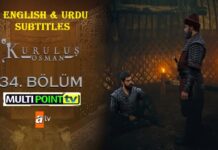 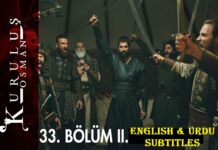 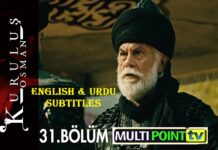 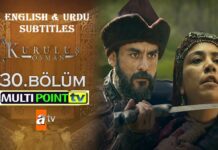 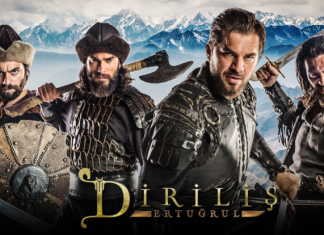