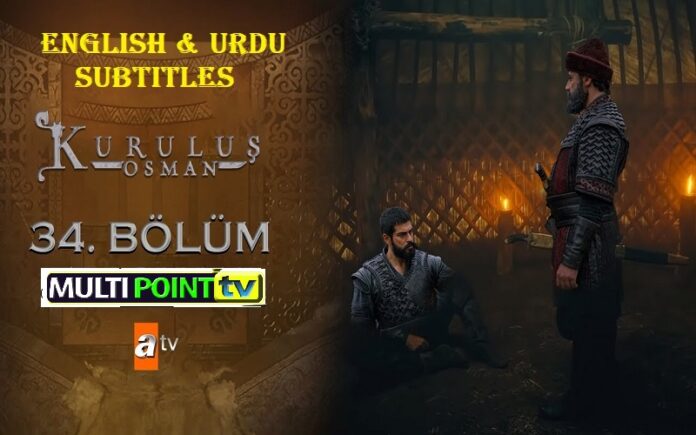 In Kurulus Osman Episode 34, Geyhatu asks where his son is and upon that Savci Bey brings Mongke to the plain with his hands tied. Geyhatu goes to his son and asks Osman Bey why he treated his son like that. Osman says that Mongke betrayed Geyhatu. Nikola prepares the Byzantine army and waits with them to attack Kulucahisar Castle. Flatyos and a few Byzantine spies dress as merchants and enter the castle. Nikola enters the castle using the secret tunnels he learned from Helen. The guards in the castle cannot fight against the Byzantine soldiers since they were previously poisoned. Osman and Savci tell all the facts to Geyhatu. Mongke denies everything but Geyhatu says that he will listen to Osman, and they all enter Ertugrul Bey’s tent. Nikola and Flatyos start attacking the Turks. Abdurrahman Ghazi prays to Allah for the recovery of Ertugrul.

In Kurulus Osman Episode 34, Osman and the Savci say that everything Mongke did is a trap to bring Geyhatu to Sogut. Dundar Bey says that Mongke is not alone in making this plan and then Geyhatu asks Yavlak Arslan questions. Yavlak says he does not blame Ertugrul Bey and his sons. Nikola kills most Turkish soldiers and captures the survivors. Geyhatu listens to the claims of both sides and asks Bamsi what to do. Bamsi says he doesn’t believe either side and asks for evidence to find out who is guilty. Geyhatu listens to Bamsi and asks for evidence to make a more just decision. Osman explains how Mongke planned to kill his father and says that Cerkutay knew this. Nikola removes Kayi flags from the castle and gives a victory speech. Geyhatu wants to talk to Cerkutay, and Osman says that he will come to the plain soon. Mongke asks his father for forgiveness when the facts come out, but Geyhatu gets up and cuts his son’s throat. Geyhatu realizes that Osman has revealed the truth by using Cerkutay’s name. Osman says he wants to punish those who set up this plan and Cerkutay.

In Kurulus Osman Episode 34, Geyhatu would like to thank Osman and Savci for what they did and set off. Byzantine soldiers remove everything belonging to the Turks from the castle. Nikola frees one of the Turkish prisoners to tell Osman about everything that happened in the castle. Osman and Savci make peace after what happened. Lena comes and says that Ertugrul’s illness is getting worse. Osman, Savci, and Gunduz go to see Ertugrul. Ertugrul opens his eyes and looks at his sons. Osman hugs his father and holds his hand. After a short while, Ertugrul’s condition worsens, and blood begins to come from his mouth. Lena and Bala immediately try to help Ertugrul. Yavlak Arslan wants to see Ertugrul, but Abdurrahman Ghazi does not allow him. Arslan later speaks to Osman, but Osman does not allow him to. Arslan gets angry with Osman and tries to talk to Savci. Savci defends Osman. Dundar brings the Turk from the castle and news comes that the castle was captured by Nikola. Osman gets very angry, but Bamsi stops Osman. Nikola thinks that Constantinople will be very happy with this win and starts to plan for the future.

In Kurulus Osman Episode 34, Osman immediately tells them to take back Kulucahisar castle, and Bamsi supports him. Savci disagrees with what Osman says and says there are prisoners in the castle. Savci says he wants to hold a meeting the next day, but Osman opposes his brother. Osman goes to the Alps and tells them that they will take back the prisoners in the castle with the gold they had previously seized. Osman says that despite what his brother the Savci said, they will attack the castle the next morning and asks the Alps to be ready for this war. Arslan says that Osman will do dangerous things, but Gunduz defends his brother. Savci says that Osman has to obey orders or he will receive a heavy penalty. Selcan and Aygul rest somewhere in the forest. Selcan is looking after Aygul’s baby and talks to Aygul about it. Aygul says she doesn’t want her baby and doesn’t take care of him. A few Byzantine soldiers come and ask Selcan what she is doing in Byzantine lands. Selcan says that these lands belong to Ertugrul, and soon Aygul attacks the soldiers.

In Kurulus Osman Episode 34, Savci and other Beys on the plain come to the meeting. Savci asks where Osman is, but no one can answer him. Meanwhile, Osman goes to the gate of the castle. Savci starts the meeting without Osman and talks about the safety of the Muslims in the castle. Gunduz says that Nikola cannot be trusted, and Dundar supports what he says. Selcan and Aygul come to the plain. Selcan arrives when Hazal says that Osman has disappeared again and is doing secret jobs. Selcan says that all the Hatuns in the plain are under her protection and goes to the meeting to talk to the Beys. Osman comes to talk to Nikola with two boxes of gold. Osman says he wants to take back the Turkish prisoners, but Nikola says that those gold were stolen from Byzantium. Nikola says he doesn’t care about gold and there won’t be a trade. As Osman closes the lids of the boxes, he catches Flatyos and says he will never leave his brothers. Osman wants the prisoners to be released or Flatyos will die. Nikola tells Osman that he cannot leave this castle, but Osman once again orders the prisoners to be released. Flatyos opposes this agreement but Nikola accepts Osman’s offer.

In Kurulus Osman Episode 34, As Osman leaves the castle, Nikola orders him to be shot by an archer. While the meeting continues in Ertugrul’s tent, the news that Osman is going to the castle comes, and Savci gets very angry. Bamsi stands up and defends what Osman did. Savci also stands up and opposes Bamsi. Osman suspects archers and uses Flatyos as a shield. Osman takes all the Turkish prisoners and leaves the castle with Flatyos. Selcan talks to Bamsi and learns what happened in the plain. Flatyos returns to the castle after a short while and tells him that he must die of this embarrassing situation. Savci says that Osman will be arrested for putting the lives of the prisoners in danger. Gunduz and Bamsi try to defend Osman. Selcan cannot take any longer and says that Osman is worthy of being Kayi Bey. Nikola lifts his sword to kill Flatyos, but later changes his mind and says he must live. Flatyos gets up and attacks Nikola. Nikola stops Flatyos and reminds him that he must avenge his father.

In Kurulus Osman Episode 34, Arslan visits Geyhatu and tries to talk to him. Geyhatu does not allow Arslan to speak and says that he wants to learn more. Geyhatu says he wants to know more about Osman and Bamsi and gives Arslan the management of all Beylics in the border region. Osman returns to the plain with the prisoners he rescued. Kayis are very happy about this situation. Savci orders Alps to arrest Osman. Many people support Osman, but Savci is determined to arrest Osman. Osman asks who will arrest him, and Bamsi confronts Savci. Savci orders the Alps again, but the Alps don’t listen to him. Bamsi tells everyone what Osman did, but Savci once again says that he will arrest him. Gunduz cannot take any more and stops everyone. Gunduz tells he is older than Savci and Osman and tries to calm them down. Savci opposes Gunduz, but meanwhile, Lena hurries out of the tent. Lena says Ertugrul Bey is dying.

Kurulus Osman Episode 34 will on air on 18th November 2020. If you feel irritated because of the ad breaks and some other issues, then ads-free permanent access for watching Kurulus Osman episode 34 English subtitles can be achieved by subscribing membership at multipointtv.com by Clicking below blue colored button. you can also download the episode to watch on Big screen TV in 1080 resolution. 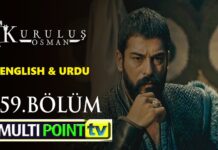