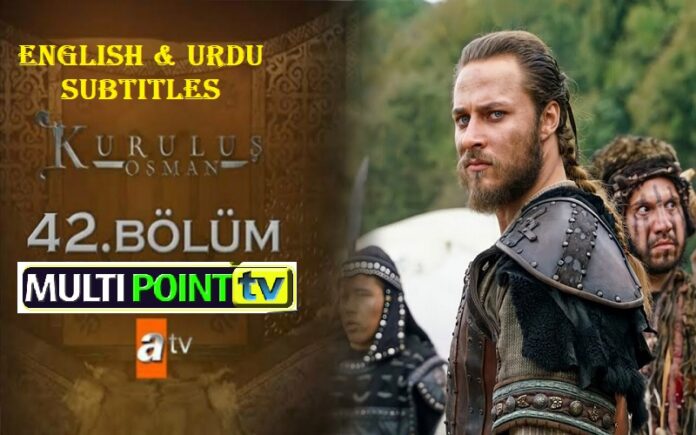 In Kurulus Osman Episode 42, Targun speaks to Selcan and becomes a Muslim, but Bala suspects her. Catholic spies meet in secret and take action to take Ertugrul’s secrets from Bamsi. Goktug and Boran realize that Flatyos has escaped and start looking for him. Bamsi takes Osman to the secret cave on the mountain and begins to tell him secrets. Bamsi says that the Turks should stay together. Bala gives a speech to other women as the Hatun of the new Bey. Targun puts poison into the sherbet to kill Bala, and Bala drinks this sherbet. Catholic spies see Osman coming out of the cave and begin to sneak up on Bamsi.

In Kurulus Osman Episode 42, Flatyos returns to the castle and talks to Nikola about Kayis. When Osman returns to the plain, he learns that Flatyos has escaped and gets very angry with Goktug and Boran. Savci and Dundar arrive and begin to blame Osman. After a short while, Bala comes to Osman’s tent and faints. Osman does not understand what happened and calls Selcan. Selcan says Bala was poisoned. Targun hurriedly examines Bala and tells them that she was poisoned. Targun says she can prepare the antidote and gets permission from Osman to make the drug. Catholic spies follow in the footsteps and enter the cave. Bamsi begins to kill those who enter the cave one by one. Bala drinks the medicine Targun has prepared in a short time and Osman begins to pray to Allah. Bamsi is injured in the hand but manages to kill all of the spies. Bala slowly opens her eyes.

In Kurulus Osman Episode 41, While Targun waits for Osman to thank her, Osman orders the arrest of Targun. Bamsi comes out of the cave and encounters other spies. Cerkutay and Abdurrahman arrive when Bamsi is about to start fighting. Soon the spies die. Bamsi realizes that the cave is no longer safe and decides to take the chests there to the plain. After Bala wakes up, she starts talking to Osman and tells him that he needs an heir. Osman listens to Bala and tries to improve her morale. Soon the blacksmith arrives and tells Osman that Dundar came out of the plain to meet Nikola. Meanwhile, Dundar meets with Nikola in the forest. Nikola says he wants to take back Kulucahisar, and Dundar will replace Osman. Dundar does not accept Nikola’s offer first, but Nikola makes other offers.

In Kurulus Osman Episode 41, Nikola later says that Osman broke the peace and caused unrest. Targun talks about what Aygul’s mother has done before and says that Aygul still loves Osman. Aygul slaps Targun and takes her to Osman’s tent. Osman orders Targun to confess her guilt. Targun tells that she loves Osman very much and that she did everything to gain his affection. Osman just says he loves Bala. Targun says she wishes she killed Bala and Osman slaps her. Osman exiles Targun and her father from the plain. Osman then gets angry with Goktug and asks him to leave the plain. Goktug mentions his brother and interrogates Osman for what he did to Targun. Osman slaps Goktug and sends him. Bala is angry with Osman for treating Targun with mercy. When Dundar returns to the plain, Boran says that Osman called him. Dundar tells Hazal that if something bad happens, she should send the news to Yavlak. Osman asks Dundar where he went. Dundar tells everything he talked to Nikola.

In Kurulus Osman Episode 41, Osman does not believe what Dundar says, but Dundar says he did it for Osman. Osman takes one of the bows from the tent and starts strangling Dundar with its rope. Meanwhile, Bamsi comes to the plain wounded and Osman gives up killing Dundar. After Osman talks to Bamsi, he says he will hold a meeting in Sogut. Osman realizes that a great danger is approaching and says that he will act with his brothers as his father said. Catholic spies come to the plain disguised as merchants and investigate where Bamsi is going. Bamsi gives Ertugrul’s written will to Osman. Osman reads what his father wrote before he died and realizes that he must remarry. Bamsi says that Osman must have an heir. Osman starts talking to the spies who look like merchants and makes a trade deal with them.

In Kurulus Osman Episode 41, Dundar realizes that his life is in danger and says he will take his revenge on Osman. Hazal says that nobody wants them on the plain anymore. Dundar makes a plan and says he will ask Osman for forgiveness. Dundar asks Hazal to help with his plan. That night, Osman invites his uncle and brothers to dinner. Dundar says he made a mistake and apologizes to Osman. Osman forgives his uncle and says that they should be united now. Osman then starts talking to Bayhoca and asks him about the situation in Konya. Osman says that he will hold a meeting in Sogut the next day and wants to conquer Inegol Castle. Bamsi can no longer use a sword with his right hand due to the wound on his hand.

In Kurulus Osman Episode 42, Cerkutay brings food to Bamsi. Bamsi asks Cerkutay about his family, but Cerkutay tells him that his whole family is dead and he is alone. Bamsi says he will train Cerkutay, and he will be Osman’s Bamsi. Osman says he will convince the Beys who come to the meeting. Osman decides to send Savci to negotiate peace with Nikola. Catholic spies open a shop with goods they bought from the plain, and Nikola comes here. Catholic spies say that Osman will attack Inegol Castle after the meeting. The next day, Nikola sends his soldiers with Flatyos to kill those who will come to the meeting. Osman and his brothers come to Sogut.

In Kurulus Osman Episode 42, Osman talks to the traders in the market and tells them that the trade will grow even more. Meanwhile, Yavlak and his soldiers come to Sogut. Yavlak congratulates Osman and tells him that they are now waiting to attack Geyhatu. Osman says that he will attack Inegol with the power of all the frontier Beys. While Osman is wondering why the other Beys are not coming, a child comes and tells him that his father was killed. Later, Boran says that the other Beys who tried to come to the meeting were also dead.

Kurulus Osman Episode 42 will on air on 20th January 2021. If you feel irritated because of the ad breaks and some other issues, then ads-free permanent access for watching Kurulus Osman episode 42 English subtitles can be achieved by subscribing membership at multipointtv.com by Clicking below blue colored button. you can also download the episode to watch on Big screen TV in 1080 resolution.