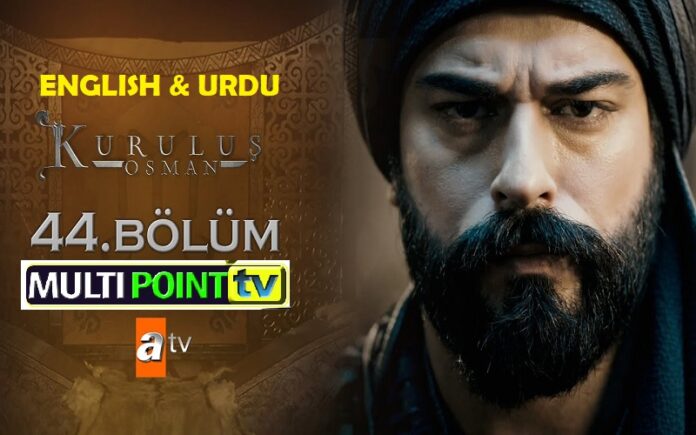 In Kurulus Osman Episode 44, Osman studies maps and reads documents all night. While Cerkutay is playing with Bamsi’s swords, the merchants come and say they want to talk to Bamsi. Meanwhile, Bamsi arrives and gets angry for playing swords with Cerkutay. One of the merchants says that Bamsi saved his father with Ertugrul a long time ago. Bamsi remembers what the merchant said from the wound on his neck. Later, Bamsi wants to offer sherbet to the merchants, but Cerkutay has already finished the sherbet. While Boran thinks about Goktug’s whereabouts, Bayhoca comes and says he wants to participate in every war after that. The next morning Bala brings breakfast to Osman and sees that he is still working. Osman has breakfast with Bala.

In Kurulus Osman Episode 43, Bala says that she wants to do some charity work and gets permission from Osman for these works. Bala then tells Osman that she wants to find a new wife. Osman allows Bala to do this job. Lords begin to come to Inegol at Nikola’s request. Yavlak visits Osman and congratulates him for what he has done. Osman asks about the status of the war preparations. Yavlak says that the young soldiers are getting ready, but they don’t have enough strength yet. Osman plans to attack the best soldiers of the Mongols by forming a unit of elite soldiers. Saltuk arrives and tells that Nikola is trying to bring the lords together and form a new crusader army. Nikola starts talking to the lords and tells them that they will fight the Turks to the death. Upon Osman’s request, Aygul sews the new flag of the Kayi. Osman tells the Alps that they must enter Inegol and tells them that they can do whatever they want to get there.

In Kurulus Osman Episode 44, After the Alps leave the tent, Osman gives Abdurrahman a secret mission. Bala distributes food to the poor in Sogut. Bala then tells how much she misses her father Sheikh. While Savci is working on the construction of the school on the plain, Bayhoca says that his mother still does not speak to him. Savci tells his son that he now needs scholars, not warriors. Bayhoca sees Boran and the other Alps getting ready to set out and asks them where they are going. Boran says they are going hunting, but Bayhoca thinks Osman has given them a new assignment. After the Alps come out of the plain, Bayhoca takes his horse and begins to follow them. Nikola asks the lords to kill the Turks who are trading and tells them about the loot they will capture. Nikola says that he will soon form a very large army with the support of the Mongols.

In Kurulus Osman Episode 43, The Alps stop the musicians from going to Inegol and put on their clothes. Bayhoca understands Boran’s plan. While Bala is distributing food, Aksu asks for her permission to distribute what she brought from home. Bala starts talking to Aksu and asks about her family. Hazal then secretly meets with Aksu and gives her gold to use her. Hazal says that she will make Aksu Osman’s new wife. Cerkutay tells Bamsi that he wants to go to war. Meanwhile, Bamsi sees the flags on the plain changing and hastily asks what’s going on. Later, Gunduz, Savci, and Dundar see the new flag. Everyone objects to Osman’s decision. Osman says that he will unite all Turks under this new flag and make conquests. Bamsi listens to the big dreams of Osman and says that they should be consulted on these issues.

In Kurulus Osman Episode 43, The Alps enter Inegol like musicians and start singing to the soldiers in the castle. Folk in the castle loves musicians. Boran then secretly meets the spying woman in the castle and learns from her what to do that night. Bayhoca then comes secretly. Boran gets angry with him at first, but now there is nothing to do. As Catholic merchants talk about how to get Bamsi’s hidden secrets, Dundar comes and asks them about the goods to come. Merchants give Dundar gold to get his support. Dundar accepts gold even though he suspects them. Bayhoca realizes his mistake and apologizes to the Alps. While Boran is comforting Bayhoca, the spy in the castle comes and tells them where the lords are located.

In Kurulus Osman Episode 43, Boran tells Bayhoca to stay in the room and takes action to go to the lords’ room. Bala tells Gonca that she will test Aksu that night. The Alps kill the guards in the corridor and enter the lords’ chamber, but this is a trap of the Byzantine soldiers. The Alps are wounded with poisonous knives and passed out. Later, Nikola arrives and orders the Alps to be taken to the dungeon. At the same time, Osman and some Alps prepare to kill Nikola. The spy woman reveals that the Alps are captured, and Osman changes his plan to save the Alps. The spy man in the castle shows Osman a secret passage. Osman reaches the dungeon through this secret passage and attacks the Byzantine soldiers who tortured the Turks. Osman saves the Alps and asks them how they got caught. Boran says he does not know how they were caught and that Bayhoca is also in the castle.

In Kurulus Osman Episode 43, Flatyos captures Bayhoca and brings him to Nikola’s room. Nikola does not know who Bayhoca is, but he realizes that he is someone close to Osman. Helen comes and says they caught the Alps because of Bayhoca’s carelessness. Bayhoca cannot take it any longer and says his uncle Osman will avenge. Nikola and Flatyos realize that Bayhoca is the son of Savci. Osman realizes that Bayhoca has been captured and sneaks out of the castle with the Alps. A soldier tells that Osman got the Alps out of the dungeon. Flatyos takes immediate action to catch Osman. Lena is very worried about her son and asks questions. Osman returns to the plain and calls Savci. Lena comes to Osman’s tent with Savci and asks what happened to her son. Osman tells that Bayhoca went to Inegol secretly and was captured by Nikola. Lena is very angry and cries. The news sent by Nikola comes. Nikola wants Kulucahisar in return for Bayhoca. Osman says that no matter what happens, he will save Bayhoca.

Kurulus Osman Episode 44 will on air on 3rd February 2021. If you feel irritated because of the ad breaks and some other issues, then ads-free permanent access for watching Kurulus Osman episode 44 English subtitles can be achieved by subscribing membership at multipointtv.com by Clicking below blue colored button. you can also download the episode to watch on Big screen TV in 1080 resolution.