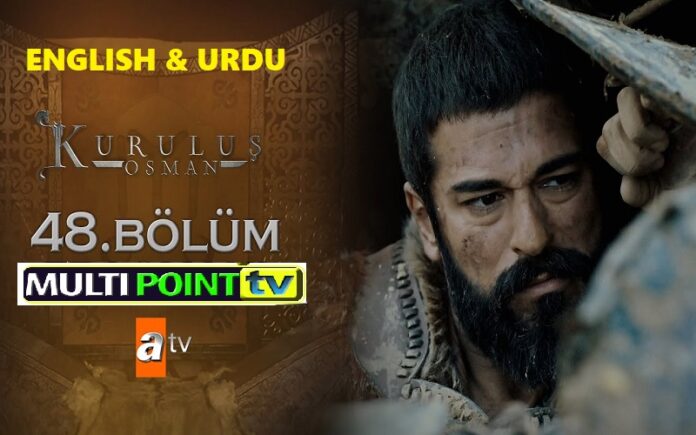 In Kurulus Osman Episode 48, Osman sees Idris in the market place and begins to follow him. Osman finally stops Idris and Malhun arrives. Idris denies it first, but then he confesses everything later. Dundar shoots Idris with an arrow without anyone seeing it. Osman and the Alps start looking for the man who killed Idris, but a few people attack Osman. Bayhoca helps Osman. Boran finds the necklace of one of the dead men. A man picks up his horse and starts running towards the forest. Osman and Bayhoca follow the man who goes to the forest. Osman shoots this man with an arrow and kills him. Later, Osman opens the man’s face but does not know who he is. Bayhoca says that this man is not a Muslim. A few people take Dundar to a secret place, but in the meantime, Dundar realizes that he dropped his ring.

In Kurulus Osman Episode 47, Malhun finds the ring on the ground but does not tell anyone about it. Osman comes for a while and says that he could not find the real traitor. Dundar meets with the merchants and learns that they are actually Catholic spies. Osman examines the arrow that killed Idris and realizes that the person who killed him was a different person. Osman looks at the necklace Boran found and orders that Idris’s tent is searched. The spy traders talk to Dundar and say they want to help him. Petrus plans to use Geyhatu’s military Togay so that Umur does not help Osman. Goktug visits Nikola and gives him secret plans from Osman. Nikola tells him that he will keep Goktug in the castle until he finds out whether the documents he brought are real or not.

In Kurulus Osman Episode 47, Osman shows the necklace he finds to Abdurrahman and Bamsi. Bamsi says these guys work for the Pope. Malhun writes a letter to her father and tells him that someone from the tribe was trying to seize Osman’s throne. Osman tells that Nikola will go to Constantinople and plans to attack them. Nikola shows the documents of Osman to the Catholic spies. Petrus says the documents are authentic and he will give Goktug the gold he wants. Dundar plans to tell the merchants about Osman’s attack plan. Malhun goes to Osman’s tent and asks where her tribe should settle. Osman wants to send them around Bolu, but Malhun objects to this decision. Osman says that Umur raised Malhun well and gave them better land. Malhun thanks Osman. Osman then speaks to Selcan and asks her to bring her tribe. Selcan is very happy with this news.

In Kurulus Osman Episode 47, Sheikh Edebali goes to the place that Osman prepared as a dervish lodge and asks the people there what happened in his absence. Dundar goes to listen to Sheikh Edebali’s words. Sheikh Edebali starts talking about the places he has visited before and the scholars he met. Sheikh Edebali then tells how important compassion is. Bayhoca has a dream and tells this dream to his mother. When Bayhoca is in a tent, a bird comes out of his mouth. This bird flies and goes far. Dundar visits the merchants that night. Flatyos takes Goktug out of the dungeon and tells him that someone will give him the gold when the time comes. Goktug continues to implement Osman’s plan step by step. The next day, Selcan prepares for the journey and says goodbye to everyone one by one. Aygul and Bala cry over Selcan’s separation.

In Kurulus Osman Episode 47, Aygul thanked Selcan many times for what she did for her. Lena apologizes to Selcan and then Selcan sets off. Osman sets out with the Alps and takes them to where the war will break out. Osman makes a speech and encourages his soldiers. Nikola is happy to go to Constantinople with useful information and he will be on the road in a short time. Hazal is very happy that Selcan goes from the plain. Meanwhile, Malhun comes and says she wants to talk to Dundar. Malhun talks about the problems in the plain, and this situation disturbs Hazal a lot. Osman places his soldiers in attack positions and begins to wait. Savci sees his son Bayhoca preparing for war and becomes proud. Bayhoca thanks his uncle Osman for being called into battle.

In Kurulus Osman Episode 47, Cerkutay and Aygul hide together in the forest and wait for the Byzantine soldiers to arrive. Cerkutay learns that Aygul is hungry and gives her his own bread, but Aygul says she is not hungry. While Gonca is preparing the aid to be distributed, Bala tells her that she should marry Boran soon. After a short while, Malhun arrives and asks if the soldiers have found a clue. Bala doesn’t say anything to Malhun. Cerkutay tells Osman that Nikola is on his way. Upon this, Osman tells his soldiers that their war should be short and that they must kill Nikola no matter what. Umur reads the letter sent by his daughter and starts thinking about Osman’s situation. Umur says that Osman will either capture the Byzantine castle or Osman’s principality will be destroyed. Meanwhile, Osman secretly waits around the route that Nikola will use. Step by step, Nikola and his soldiers fall into Osman’s trap.

In Kurulus Osman Episode 47, With Osman’s signal, first, the archers and then the Alps start to attack. Helen orders the Byzantine soldiers to protect Nikola. Flatyos attacked from behind and Bayhoca was seriously injured while Osman was going over Nikola. Osman sees that the soldiers led by Flatyos are coming to help Nikola. While Dundar is having dinner at the inn, Malhun comes and starts asking him questions. Dundar wants to leave without answering these questions, but Malhun stops him. Malhun says that Osman does not trust Dundar and that’s why he didn’t take him to the battle. Nikola learns from Petrus that Osman was going to attack and asks him from whom he learned this information. Petrus says Dundar is now working for them and asks Nikola to make a plan to kill Osman. Savci tries to keep his son Bayhoca alive. Nikola pulls his sword and orders his soldiers to attack.

Kurulus Osman Episode 48 will on air on 3rd March 2021. If you feel irritated because of the ad breaks and some other issues, then ads-free permanent access for watching Kurulus Osman episode 48 English subtitles can be achieved by subscribing membership at multipointtv.com by Clicking below blue colored button. you can also download the episode to watch on Big screen TV in 1080 resolution.