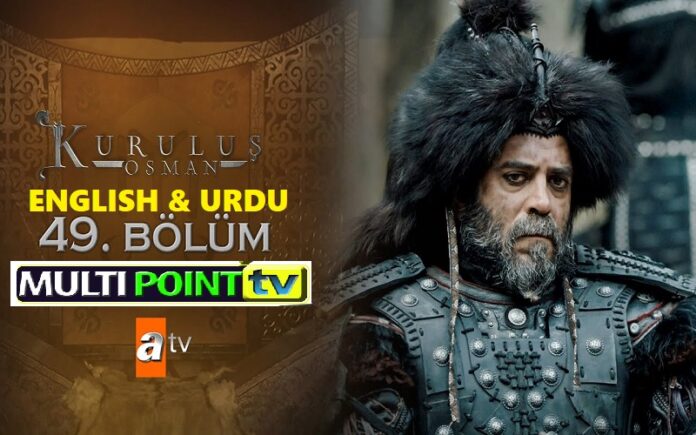 In Kurulus Osman Episode 48, Later, Osman and the other Alps come to this cave. Flatyos and Nikola follow Osman and come to the entrance of the cave. The soldiers cannot enter because of the archers in the cave, but Flatyos wants to kill Osman. Nikola asks Helen to take the other documents from the Goktug and kill him. Osman takes Bayhoca out of the other entrance of the cave in secret. Boran says that Nikola knew everything beforehand. Osman sends the wounded soldiers to the plain and says he will capture Flatyos. A man goes to the spy merchants’ shop and puts his knife around Petrus’s neck. Petrus realizes that this man is Boke and tells him that he knows everything that happens in this land.

Petrus says that if Togay agrees to work together, he will tell where Umur is. Petrus says that he will give Umur to Togay in exchange for Osman’s head. Savci brings Bayhoca and other wounded soldiers to the plain. Gunduz immediately orders the wounded to be treated. Gunduz sees that Osman did not return to the plain and is happy. Malhun learns from one of the wounded soldiers why the Turks were ambushed. Lena immediately tries to treat her son’s wound. Aygul tells her father that Nikola set up a trap and Osman was trying to catch Flatyos. Osman sets a trap to catch the traitor on the plain with the information he learned from Goktug and attacks Flatyos. Flatyos says he will not surrender without a fight and attacks Osman, but Osman catches him in a short time. Osman asks Flatyos who Idris was working for and who is the traitor on the plain, but he cannot get an answer. Dundar thinks that Osman lost heavily and even died. Goktug says he will find spies working for the Pope. As Bayhoca is dying, he asks where his sword is and dies while holding it.

Lena cries next to her son. Savci puts his sword on his son. Osman arrives while Bala calms Lena. Dundar is surprised to see that Osman is alive. Osman enters the tent and sees that Bayhoca is a martyr. Savci asks Osman for help to avenge his son. Osman says he has already caught Flatyos. Savci and Lena act immediately. Dundar learns that Flatyos has been captured and thinks his treacherous deeds will come out. Hazal immediately says that they should kill Flatyos.

Lena takes her knife and tries to kill Flatyos, but Osman stops her. Helen learns that Goktug has betrayed and Flatyos has been caught. Osman questions Flatyos but gets no answer. Later, Savci starts beating Flatyos. Malhun says she will reveal the traitor on the plain. Savci wants to kill Flatyos, but Osman opposes him and says he has something to learn from him. After a short while, Dundar visits Savci and tells him that Flatyos will not speak no matter what. Savci says Osman is right, but Dundar continues to provoke him and tells him that he should kill Flatyos. Bala transmits what Malhun said to Osman and complains about her. Osman says Malhun is right.

Lena and Savci go to talk to Flatyos once again. Savci asks who the traitor is on the plain, but Lena stabs Flatyos. Flatyos thanks Lena. Savci can’t take it any longer and cuts Flatyos’ throat. Later, Savci tells Osman that he killed Flatyos. Osman gets angry with Savci for what he has done, but in the meantime, Lena suddenly begins to scream. Bala tells that Lena has started giving birth and asks other women for help. While going through the woods, Goktug hears something Mongolian and follows the voices. Goktug sees Togay in the middle of the forest. While Savci worries about Lena’s condition, Lena gives birth to her baby. Bala tells that Savci has a son and that Lena is healthy.

A thick fog suddenly surrounds Goktug and his soldiers. Togay says he will send Kongar to hell. Goktug is injured but manages to escape from there. Sheikh Edebali prays for Bayhoca and tells that he is in a better place now. Later, Osman and Beys take Bayhoca’s body to the cemetery. Helen and Catholic spies visit Togay. Petrus says that the documents that Togay received from Goktug are fake. Petrus says he will take Togay to Osman to save his life. Savci and Lena cry at the grave of Bayhoca. Nikola goes to Constantinople. The emperor is angry with Nikola for all that happened and tells him that he was unsuccessful. Before Nikola came to Constantinople, he said that he did great harm to Osman, but meanwhile, the news sent by Helen comes.

The emperor learns that Flatyos has been kidnapped and gives Nikola one last chance. Dundar says he will do anything to find the traitor on the plain. Osman wonders if Goktug is able to fulfill the task. Osman sends Gunduz to find Goktug. Malhun says that her father is about to come, but nobody knows about it. Osman says he will set out together with Malhun. Petrus visits Dundar and tells him that great trouble will come to Osman . While Osman is going to see Umur with Malhun, Togay follows them.

Kurulus Osman Episode 49 will on air on 10th March 2021. If you feel irritated because of the ad breaks and some other issues, then ads-free permanent access for watching Kurulus Osman episode 49 English subtitles can be achieved by subscribing membership at multipointtv.com by Clicking below blue colored button. you can also download the episode to watch on Big screen TV in 1080 resolution.