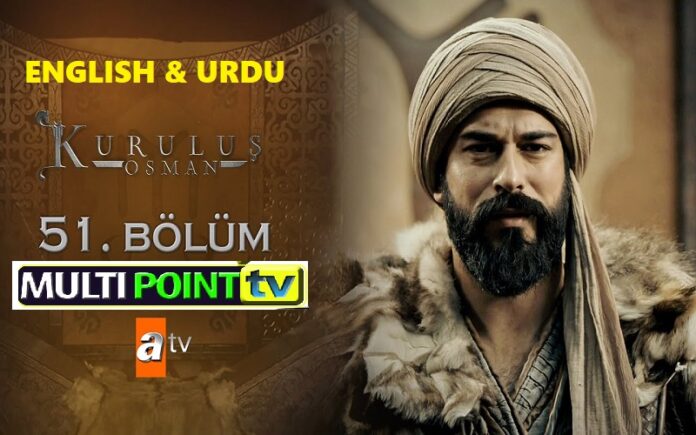 In Kurulus Osman Episode 51, Petrus is led by Mongolian soldiers to a secret military base. Togay comes out of the ground and says something Mongolian. Petrus says he wants to completely destroy Osman’s reputation, but Togay’s plan is different. Togay says he wants to kill Osman completely. Petrus says that Lord Nikola will support Togay in this matter. Osman asks Bala to heal Malhun. Meanwhile, Hazal comes and says that Osman cares a lot for Malhun. Osman tells what Togay did to the other Beys in the plain. Osman says Nikola will form an alliance with Togay after he returns from Constantinople. Cerkutay follows the trail in the forest and finds some Mongolian soldiers. Aygul and the Alps attack the Mongolian soldiers in the forest. Cerkutay sees his friend Suci and tells them not to kill him.

Dundar says he shouldn’t do secret deeds for a while, but Petrus says that Nikola has returned from Constantinople and that he will soon form an alliance with Togay. Meanwhile, Nikola comes to Inegol and orders all the lords to send their soldiers to attack Sogut. Nikola says that the emperor sent a large army under the command of Kalanoz and he will attack Sogut with this army when Osman is about to attack Inegol. Cerkutay brings Suci to the plain and Osman interrogates him to find out where Togay is. Togay goes to Inegol castle. Nikola says he will do anything to kill Osman and he will support Togay. Togay says that he will let Nikola live on the condition that he uses the Byzantine soldiers and leaves. Cerkutay thinks about his friend Suci and remembers that he saved his life before. Aygul realizes that something is wrong in Cerkutay and asks him what happened.

Cerkutay says he misses the forests and wants to return there. Umur gets angry with Malhun for what she has done and learns that Osman is questioning a Mongolian soldier. Dundar sees all enemies of Osman united and gets excited. Osman goes to Umur’s tent and tells him about his plan. Umur asks him how long he will wait. That night, Cerkutay secretly enters the tent where the prisoner was and attacks the guarding Alps. Cerkutay tells Suci that he has come to pay off his debt and unchains him. Cerkutay and Suci run away together. Osman learns what Cerkutay did the next day and realizes that he lied to everyone. Dundar says that the traitor among them is Cerkutay and that is why they have had problems for a long time. Later, Aygul comes and learns what Cerkutay has done. Aygul tells everyone what Cerkutay said the day before.

Bamsi cannot understand why Cerkutay betrayed him. Osman says he will find the traitor and give the necessary punishment. While Cerkutay is upset that he betrayed the Turks, Suci tells him to go to Togay and they set out together. Suci leads to Cerkutay’s Mongolian base in the forest. Cerkutay says he did everything to get Balgay’s revenge on Osman. Cerkutay takes them to a place with Turks to gain the trust of Togay. Mongolian soldiers attack the Turks, but this is Osman’s trap. Osman and the Alps take their swords and kill all the Mongols. Osman says Togay will meet Nikola for the new soldiers. Osman congratulations to Cerkutay for what he did. Soon after, Togay learns that everything was a trap and he lost many of his soldiers.

Osman visits Umur again and tells him that they are getting closer to catching Togay. Osman asks Boran to follow Malhun secretly. Umur decides to find Togay on his own. While Nikola is planning to take over Sogut, a priest comes and tells him that he should go to church more often. As Nikola is about to kill the priest, Togay comes and tells him he will give him to Sogut. Togay gives Nikola a map of the tunnels in Sogut. Osman learns that Nikola is talking to Togay and even trying to bring the other lords together. Osman says he will use lord Aris to break the alliance between the lords. Umur plans to take Togay by talking to Nikola. Malhun asks her father for permission to go to Inegol Castle as an ambassador. Abdurrahman and Davud go to the lodge to listen to what Sheikh Edebali said.

The next day, while Malhun and the Alps are going to Inegol Castle, one of Osman’s soldiers sees her. Osman takes his soldiers and goes to the forest with them. Osman tells the Alps that using the mind in war is as important as using a sword. Malhun gets rid of the soldier who followed her and goes to Inegol castle alone. Malhun says she wants to capture Togay, but Nikola asks her what she can give in return. Meanwhile, Togay comes to the castle. Osman attacks the lord Aris and kills his soldiers. Gunduz grabs Aris and ties his hands. Malhun suddenly attacks Togay, but Togay stops her. A Byzantine soldier tells Nikola that Osman captured Aris. Nikola says that they can take Osman by using Malhun and stops Togay. Osman and his soldiers return to the plain. Osman orders Aris to be taken to the tent and learns that Malhun has done something secret.

Dundar becomes increasingly uncomfortable with what Osman did. Osman goes to his tent and asks everyone to go out. Osman takes out his knife and cuts the strings from Aris’s hand. Aris is very surprised by this situation and begins to listen to Osman. Later, Osman starts eating with Aris. Osman starts talking about trade and asks how much tax Nikola gets from the traders. Osman tells Aris that if he stops working with Nikola, he will let him live and even make a new commercial deal with him. Meanwhile, Togay comes to the plain alone. Osman comes out of his tent and asks Togay why he came. Togay says he has captured Malhun and wants the lord in return. Togay tells Osman the meeting place and time.

Kurulus Osman Episode 51 will on air on 24th March 2021. If you feel irritated because of the ad breaks and some other issues, then ads-free permanent access for watching Kurulus Osman episode 51 English subtitles can be achieved by subscribing membership at multipointtv.com by Clicking below blue colored button. you can also download the episode to watch on Big screen TV in 1080 resolution.