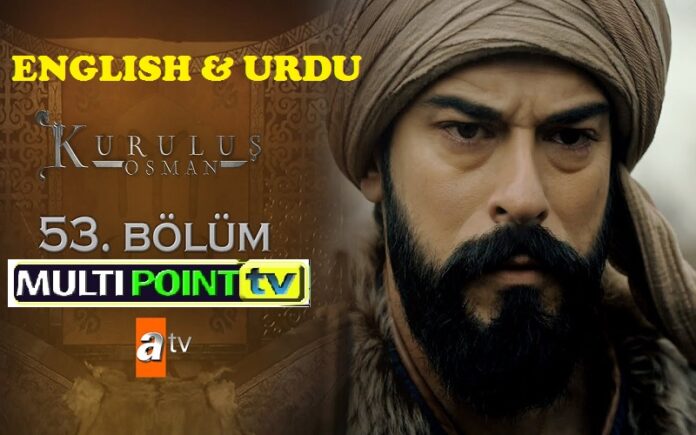 In Kurulus Osman Episode 53, Togay thinks he has done enough damage to the Turks and orders his soldiers to withdraw. Gunduz takes some soldiers with him and begins to follow Togay. Boran puts Gonca in a carriage to take her to the plain. Malhun asks Osman to withdraw his soldiers and tells him that he has not kept his previous promise. Osman tells the Alps to take Malhun’s horses and the two groups start to fight. Osman tells Malhun that she cannot sell horses to the enemy and that he will pay twice the price Nikola paid for the horses. Bamsi says that Abdurrahman is martyred and that he will kill the traitor in the tribe. On his way to the plain, Osman sees the Turks killed by Togay. Bamsi is very upset that one of his closest friends has died. Osman learns that Abdurrahman was martyred and cries for him.

Osman tells everyone that he will avenge Abdurrahman. Malhun returns to the plain and tells her father what Osman did. Umur gets angry with what Osman has done and is forced to change his plan. Umur asks Malhun to prepare the soldiers and says he will talk to Osman. Nikola is happy to cause a problem between Umur and Osman and he plans to use this situation to attack Sogut. The Mongolian commander Camuha comes to the castle and tells that Togay is going to Konya. Camuha says that Osman’s reputation was damaged and Abdurrahman was dead. Camuha says it’s time to eliminate Umur, but Nikola says his plan is different. Camuha says the Mongols will capture Sogut and establish a military base there. Nikola says he will have Osman attack the Mongols. Gonca opens her eyes and talks to Boran. When Malhun comes to the plain, she learns what happened.

Umur then goes to Osman’s tent and tells him that he is sorry for Abdurrahman’s death. Osman gets angry with Umur for trading with Nikola. Umur tries to defend himself first and then says that he will support Osman. Meanwhile, the messenger sent by Nikola comes to Osman’s tent. Nikola tells Osman where Togay is hiding and has nothing to do with the attack. Osman says it is a trap, but he will still get there. Cerkutay says that there are Mongolian soldiers in the place Nikola said and Osman starts the attack. The Turks kill most of the Mongol soldiers, but Osman cannot find Togay. Camuha escapes from the battlefield and tells that he will behead Osman. Osman realizes that Togay is elsewhere and says that Nikola no longer trusts the Mongols.

Camuha thinks about how Osman found the hidden place in the forest and goes to Sogut. Camuha goes to Petrus’ shop and asks him if he spoke to Osman. Osman says that Nikola has a reason to betray Togay and that he will use this situation. While Osman is talking with the other Beys, Savci comes and says that Kalanoz’s brother is approaching with a large army. Osman says that they will conquer Inegol before Kalanoz arrives. Dundar receives a message from Petrus and plans to harm Osman by using Togay. The next day, Umur calls Malhun and tells her that what Osman did was very wrong. Umur says that Osman did not summon him and his soldiers to the Inegol attack. Once again, Umur immediately sends his daughter Malhun to talk to Osman. Dundar goes to the forest to talk to Petrus, but finds Camuha there. Camuha asks who told Osman the Mongolian base in the forest.

Dundar says that Nikola told this information to Osman and he used Umur. While Osman takes his soldiers and tries to go to the battlefield, Malhun arrives. Malhun says she wants to join the war, but Osman asks her to stay out of the way. Malhun returns to the plain. Kalanoz advances slowly towards the castle with his soldiers. Osman meets with his soldiers in the forest and tells them about the attack plan. Umur says he will take Inegol while Osman is dealing with Kalanoz and Togay. Sheikh Edebali learns about Togay’s attack. Meanwhile, Bala arrives and tells that the people around Osman have had a lot of trouble lately. While Kalanoz checks whether the road they will use is safe or not, Osman attacks. Archers of the two armies start attacking each other. Osman injures Kalanoz in his shoulder.

Bamsi and Savci, on the other hand, attack the Byzantine soldiers and help Osman. Osman says that the Mongols will kill the Byzantine soldiers who fled from the battlefield. Umur learns that Osman has killed Kalanoz’s soldiers and he decides to call the leaders of the other tribes. Osman says that he did a great deal of damage to the support Nikola was waiting for. Gunduz says that they should support the other tribes participating in the war. Osman asks Dundar to help all the tribes that participated or did not participate in the war. Osman also calls the Beys to his tent to talk to them. That night, Malhun thinks that she did not treat Osman fairly. Kalanoz goes to the castle and says that both Turks and Mongols attacked. Nikola tells Kalanoz how to conquer Sogut. The next day, Osman comes out of his tent and starts talking to the Alps. Osman says that his only goal is to make his soldiers even better and they will take revenge on Togay.

Osman learns that the Beys he called to talk went to talk to Umur. Meanwhile, Sheikh Edebali invites both Umur and Osman to the lodge. Umur gives two chests of gold to the Beys who come to the meeting and asks them to support their tribe. When some Beys say Umur is wrong to trade with Nikola, Osman comes. Umur says he wants to support the tribes, but Osman says that he is responsible for this issue because he called them to war. The Beys who come to the meeting leave the gold they have taken and leave the tent with Osman. Dundar gets angry with Petrus and tells him that he should no longer do secret deeds. First Osman and then Umur come to the lodge. Umur says that he warned Osman about the traitor on the plain, but that Osman acted unfairly. Osman asks who the traitor is, and Umur gives him the ring he found. Osman realizes that this ring belongs to Dundar.

Kurulus Osman Episode 53 will on air on 4th April 2021. If you feel irritated because of the ad breaks and some other issues, then ads-free permanent access for watching Kurulus Osman episode 53 English subtitles can be achieved by subscribing membership at multipointtv.com by Clicking below blue colored button. you can also download the episode to watch on Big screen TV in 1080 resolution.