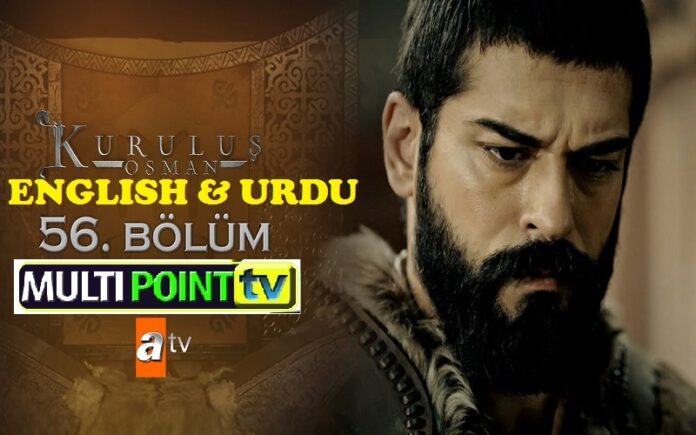 In Kurulus Osman Episode 56, Osman and his soldiers start attacking Nikola. Shortly after, Malhun and Gunduz come to help him. Nikola can not understand how he understood Osman’s plan. A bloody war broke out between the two armies. Savci and Goktug start waiting for the gunpowder in the tunnels to explode. Cerkutay fired the fuse, but the fire died out after a short while. Cerkutay tried to fire the fuse again before the Byzantine soldiers arrived. Savci still tries to understand why there was no explosion. The tunnels explode and all Byzantine soldiers there die. Cerkutay exits the tunnel at the last minute but is injured. Goktug says that Cerkutay is dead, but he wakes up after a while. Osman saves Malhun’s life. Savci takes the Alps and goes to check the tunnels. Kalanoz attacks Osman to avenge his dead brother. Meanwhile, a Byzantine soldier tells Nikola that the tunnels were blown up.

Nikola orders all his soldiers to retreat. Osman sees the Byzantine soldiers starting to flee. Malhun thanks Osman for saving her life. Osman declares that they have defeated them and says they are getting stronger now. Togay performs a ritual somewhere in the forest for the Mongolian soldiers who died. Meanwhile, Camuha comes and tells that Nikola’s soldiers died in the tunnels. Togay realizes that Osman is using gunpowder and goes to talk to Nikola. Osman and his soldiers return to the plain after their victory. Everyone in the plain congratulates Osman and the Alps. Cerkutay talks to Bamsi and asks if his hand is healed. Umur is happy with the win but thinks Nikola might cause a problem. Nikola finds the commander of the soldiers who should attack through the tunnels and says he lost the war because of him. The commander says he is innocent, but Nikola kills him.

Sheikh goes to Osman’s tent to eat that night and prays. Sheikh says that Muslims are very strong as long as they are together. Osman says Malhun fought very well. Malhun says that Nikola will do something to get revenge. The next day, Yason goes to Nikola’s castle and tells that the Christians in Yarhisar started to go to Osman’s plain to avoid paying heavy taxes. Nikola asks Yason to let the Christians go and tells him to put a spy among the people. Christians from Yarhisar come to the Kayi plain and say that they escaped the lord’s heavy taxes. Osman orders tents to be set up for his guests. Togay and Camuha go to Nikola’s castle. Togay says Nikola was a traitor. Nikola says that the people who should pay taxes took shelter in Osman and asks Togay to bring the refugees.

Togay says he will take the refugees and the Yarhisar lord will pay the taxes. Bala and Lena help refugees. Later, Osman comes and says that he will soon give the refugees a land where they can live freely. While Osman prepares to go to Sogut, Camuha comes to the plain. Umur visits Nikola, but Nikola does not welcome him. Umur says that Malhun went to war without his permission and wanted to protect the trade between them. Camuha says he wants to take refugees from Yarhisar. Osman reminds Camuha how Genghis treated the guests. Osman says that no matter what happens, he will not return the refugees. Bamsi then tells him he has a word to say for Togay and slaps Camuha. Some Beys think that Geyhatu can attack. Osman says Togay can ally with Nikola to collect the taxes. Camuha tells Togay that Osman will not return the refugees. Umur says that they will no longer support Osman openly to continue the trade with Nikola.

Malhun doesn’t like her father’s plan. Osman learns that the other lords have started sending troops to Nikola. Osman writes a letter to the Pope and gives it to Simon. Osman tells Simon that he will release Petrus and asks them to do one last thing. Osman asks Simon to find out when Nikola will attack. Togay goes to the castle and tells him that Nikola will now obey his orders. Simon says Nikola will attack two days later, but Osman asks him for more information. Simon says Nikola may have killed him, but asks Petrus to fulfill the mission no matter what. Simon then goes to the castle and tells Nikola that Osman learned the tunnels thanks to Dundar. Nikola does not believe what he says and asks where Petrus is. Simon says they deceived Osman and gained his trust.

Nikola summons the spy on the Kayi plain. The spy says he saw Simon entering Osman’s tent and then Nikola stabs Simon several times. Nikola sends the spy back to the plain and asks him for more information. Umur learns that Nikola will attack Osman soon, and even Togay will support Nikola. Malhun says she has to support Osman, but Umur opposes her. Malhun says that if they don’t help Osman, he can die. Lena goes to Bayhoca’s grave and talks to him. Then Savci comes and tries to comfort his wife. Osman secretly speaks with the leader of the white beards. The leader of the white-bearded people appreciates what Osman has done and asks him what he wants. Osman says that because he does not return the refugees, Nikola will attack with Togay and he wants to break this alliance. The leader of the white beards says that they will not leave Osman alone. Togay goes to the castle and tells Nikola about the plans of their attack.

Togay plans to attack Osman from both sides. Gunduz says that Melik has not returned from the castle yet. Petrus sees Simon in his dream and realizes that he is dead. Savci prepares to go to war. Lena asks her husband to be careful. Malhun sneaks some Alps from her father and goes to the forest to support Osman. Osman sees Malhun and allows her to join the war. Malhun says she has all the responsibility and Osman makes a speech to all the soldiers.

Kurulus Osman Episode 56 will on air on 28th April 2021. If you feel irritated because of the ad breaks and some other issues, then ads-free permanent access for watching Kurulus Osman episode 56 English subtitles can be achieved by subscribing membership at multipointtv.com by Clicking below blue colored button. you can also download the episode to watch on Big screen TV in 1080 resolution.