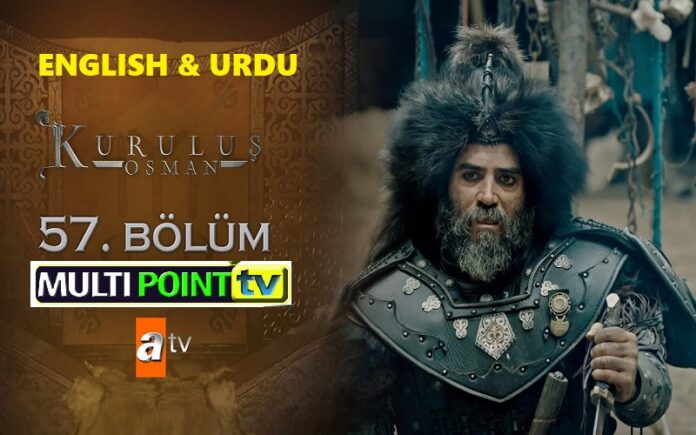 In Kurulus Osman Episode 57, Osman and the Alps attack the Byzantine soldiers after meeting with Malhun in the forest. The war is bloody and tough. Kalanoz realizes that he is losing the war and run away. Savci start following Kalanoz. Malhun tells Osman that Savci is going to capture Kalanoz. Kalanoz attacks Savci and stabs him twice. Osman sees that his brother is injured and wants to help him, but Savci asks him to follow Kalanoz. Nikola says he lost this war because of Togay, and he is very angry with him. Osman beats Kalanoz and catches him. Gunduz tries to help Savci. Savci begins to describe his dream the night before and tells that his father is waiting for him. Savci asks Osman to take care of his son and wife and dies shortly after.

Osman kills Kalanoz there. Osman cries over the death of his brother and prepares to return to the plain. Umur learns that Malhun went to war with Osman and gets angry with his soldiers. Umur says that Malhun harmed his relationship with Nikola, and he is very angry with her. Lena prays to Allah and asks Savci to return as soon as possible. Meanwhile, Osman and his soldiers arrive. Lena goes out of her tent to see her husband, but she can’t see him. Lena asks Osman where Savci is and learns that her husband was martyred. Lena sees Savci’s lifeless body and begins to cry. Osman asks Lena to be strong. Osman says that they suffered a lot of losses in the war and therefore they will not celebrate victory.

Malhun goes to his father’s tent. Umur gets angry with his daughter for secretly going to war, but Malhun apologizes and tells him that it is a great war. Malhun says they won the war and Savci was martyred. Umur immediately goes to Kayi plain. Osman says that Savci has done a lot of good things for his tribe for years. Sheikh Edebali tells that Savci went to his son Bayhoca. Later, Osman and other Beys take the dead body of Savci to the cemetery in prayers. That night everyone prays for all the martyrs. Osman would like to thank everyone who came to Savci’s funeral. Sheikh Edebali tells everyone that Savci has met the food needs of the dervish lodge for years. Osman grabs his brother’s sword and tells him that he was fighting for Islam.

Gunduz asks they had an important win but why Togay withdrew. Osman follows the advice he gets from the leader of the white bearded men and collaborates with Togay in secret. Bala, Aygul and Gonca arrive while Lena prepares to go to Kulucahisar. Lena thanks everyone one by one and asks them to come visit. Bala then goes to Osman’s tent and tells that food was distributed to all the poor for three days. Bala says that Lena went to Kulucahisar with Gunduz. Osman thanks Bala for what she did. Gunduz says that Togay will come to collect taxes soon, but Osman is not worried at all. Osman says that Togay will stop Nikola and Petrus will pay for what he has done now. Nikola welcomes the soldiers sent by the other Lords and asks them to prepare for battle as soon as possible. Umur learns that Osman is collaborating with the Mongols and he is very angry. Umur then sends his daughter to Enguru as punishment.

Bamsi and Cerkutay go to the caged tent. Bamsi tells that Simon is dead and that Petrus will pay for what he had done before. Bamsi stabs Petrus. Osman with some of the Alps goes to the Mongols’ secret base in the forest. Osman sits next to Togay and starts talking to him. Togay congratulates Osman for paying allegiance to Geyhatu. Osman says that he is responsible for the safety of the people living in the lands his father conquered and therefore asks Togay to prevent Nikola from attacking Umur. Umur then goes to Osman’s tent and gets angry at him for collaborating with the Mongols. Osman says he did this to destroy the Mongols’ alliance with Nikola. Umur realizes that everything is a game and tells Osman that Malhun went to war without permission from anyone.

Togay then goes to Inegol and tells him that he is in charge of the border area with the authority he received from Geyhatu. Togay says that Osman now obeys the Mongols and will pay taxes. Togay asks Nikola not to touch Osman and the Turks nearby, but Nikola says that Osman was lying. Umur tells Malhun that Osman is working with the Mongols to prevent war and asks her to set out soon. Malhun comes to a crossroads and decides to talk to Osman instead of going to Enguru. Umur goes to Inegol and apologizes to Nikola for what his daughter did. Umur says he wants to trade no matter what. Malhun goes to Osman’s tent and tells him that her father sent her to Enguru because she went to war without permission. Osman says she will not go anywhere and goes to talk to Umur.

Osman goes to Umur’s tent and tells him that Malhun is in his tent. Osman says he will not allow Malhun to be punished, but Umur continues to argue. Umur says that he is still trading with Nikola, but in the meantime, the news comes that Nikola killed the soldiers in the trade caravan. After this news, Osman says that Malhun’s departure is dangerous and returns to his tent. Osman says that Malhun will not go to Enguru and they start eating together. The next day, the soldier sent by Togay comes to the plain and demands taxes from Osman. Osman brings the chests full of gold and tells the soldier that he can take them. As the Mongolian soldier touches the gold, Osman hits his hand and starts to beat him. Osman asks the soldier to return to the base and tell him that the Turks will never pay taxes.

Kurulus Osman Episode 57 will on air on 5th May 2021. If you feel irritated because of the ad breaks and some other issues, then ads-free permanent access for watching Kurulus Osman episode 57 English subtitles can be achieved by subscribing membership at multipointtv.com by Clicking below blue colored button. you can also download the episode to watch on Big screen TV in 1080 resolution.