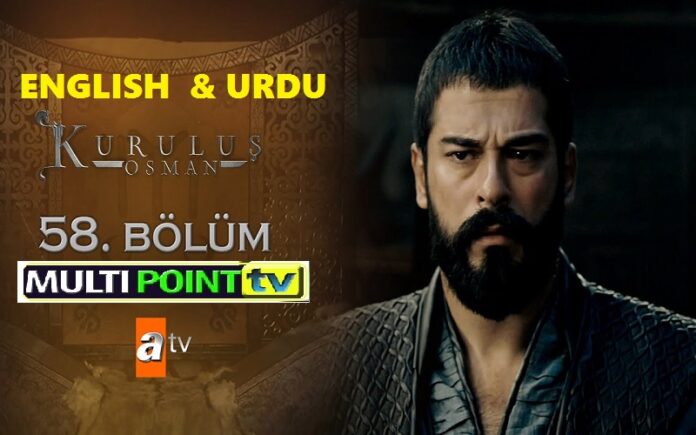 In Kurulus Osman Episode 58, While Togay was performing a ritual in the forest, the messenger he sent to Osman returns. The envoy tells that Osman does not pay taxes and Togay kills him. Togay reads the note sent by Osman. Osman gets angry with the Alps because of the messenger and asks them to be more careful. Togay tears the paper sent by Osman and swears that he will kill him. Osman asks Gunduz to take more security measures. Umur gets angry with Malhun for what she has done and says he has not forgiven her yet. The governor of Geyhatu learns that Osman did not pay taxes and tells the Sultan that he beat the envoy he sent. Sultan says he will punish Osman and sends an Emir to summon him to the palace. Yason says that Osman expelled the Mongol ambassador from the plain and that he would not pay taxes. Nikola asks Yason to keep calm and tells him that they will attack Togay.

Togay comes out of the grave and says he will kill Osman. Meanwhile, the message sent by Yargucu comes and says that Togay will not attack Osman. Osman goes to Sheikh’s shop and starts talking to him about the Mongols. Goktug comes to the shop and gives Osman the message sent by the Sultan. Osman learns from Konya that the Emir of the Sultan will come and orders good food to be prepared for him. That night, Emir comes and gives the gifts sent by the Sultan to Osman. Emir says that Sultan invited Osman to Konya. Umur learns that Emir visited Osman and says that he did not receive any support from anyone all this time. Umur says that he will not wait any longer and will act. Osman sets out with his soldiers the next day.

Togay goes to the castle. Nikola reminds him that what he said about Osman before was true. Togay tells that Osman is going to Konya and orders the Yashisar lord to pay his tax now. When he finds out that Togay will not attack Osman, Nikola plans to attack him. Cerkutay and Aygul catch the spy on the plain. Nikola invites Umur to his castle. Nikola says that Togay will attack Umur soon. Umur says he is looking for an opportunity to attack Togay. Nikola offers him to attack Togay together and tells him about the attack plan. Gunduz interrogates the spy on the plain and learns from him that Nikola will attack Togay. Gunduz is happy with this news, but Bamsi says that Nikola has a secret plan. Osman and the Alps reach the palace. Emir asks them to get rest. Boran and Goktug think something bad might happen and they can’t sleep all night.

Umur tells his daughter that he will attack Togay with Nikola. Malhun says that Osman will not like this decision, but Umur says that he does not have to get permission from anyone. Osman proceeds to the Sultan’s room with the gifts he brought from the plain. The Sultan’s soldiers ask Osman to lay down his sword and tell him how to talk to the Sultan. Osman then comes in and gives his gifts to Mesud. Meanwhile, the governor Yargucu suddenly enters and starts talking to Osman. Mesud asks what Osman did to the ambassador. Osman says that the Mongol envoy attacked him and sent him to Togay. Yargucu does not believe him, but Osman says that Togay killed the envoy. Yargucu asks Osman when he will pay the tax. Osman says that he will only pay the tax to the Sultan and the Sultan accepts it. Osman tells his soldiers that they will return to the plain after the meeting is over. As Osman is about to leave the palace, the Sultan stops him and says he did everything to protect his plain.

Sultan asks Osman to be patient for a while. Togay looks at the taxes collected and tells him that Nikola could attack to get revenge. Osman returns to his tent that night and tells the Beys that they talked to the Sultan. Osman says that they will be patient for now and will get the support of the Sultan. Gunduz says that a war may break out between Nikola and Togay. Osman says he will not help this attack and he will speak to the other Beys. Cerkutay goes to the dervish lodge and says he wants to talk to Sheikh. Sheikh reads a passage from the Qur’an, and that night Cerkutay becomes a Muslim.

Osman arrives while Umur is telling Malhun about his plan to attack Togay. Osman says he came to tell about what he talked to Sultan. Osman says that he and Sultan will live with the Mongols for a while without causing any problems. Umut opposes Osman’s decision and says that he will not obey the Mongols no matter what. Osman says that Sultan will give an army. Umur is against Osman again. Malhun tries to calm both of them, but says that Umur will not take permission from anyone to attack Togay. Osman tells Umur that if he does such a thing, he must bear the consequences. While Aygul and Kumral make swords, the food sent by Cerkutay comes. Aygul learns that Cerkutay sells his armor and distributes food to everyone to celebrate that he is a Muslim. Aygul says Kayi women will make armor for Cerkutay. Sheikh tells Osman that Cerkutay is a Muslim.

Osman tells Sheikh of his plan with Sultan. Osman says that Umur’s attack on Togay will ruin his plan. Sheikh thinks of a way to stop the conflict between Osman and Umur. Osman gives Cerkutay a Qur’an and a prayer rug. Cerkutay says he will fulfill his responsibilities as a Muslim. Meanwhile, Goktug comes and tells that Umur is about to depart with his soldiers. Osman takes the Alps and sets out to stop Umur. Osman stops Umur in the forest, but Umur asks him to get out of his way. Osman asks Umur to return to his plain. As the war between the two armies is about to break out, Sheikh comes and stops them. Sheikh asks Umur to return to his plain for the future of the Turks. Umur accepts this and returns. Sheikh says that Osman must marry Malhun to end the problem between the two tribes.

Kurulus Osman Episode 58 will on air on 12th May 2021. If you feel irritated because of the ad breaks and some other issues, then ads-free permanent access for watching Kurulus Osman episode 58 English subtitles can be achieved by subscribing membership at multipointtv.com by Clicking below blue colored button. you can also download the episode to watch on Big screen TV in 1080 resolution.