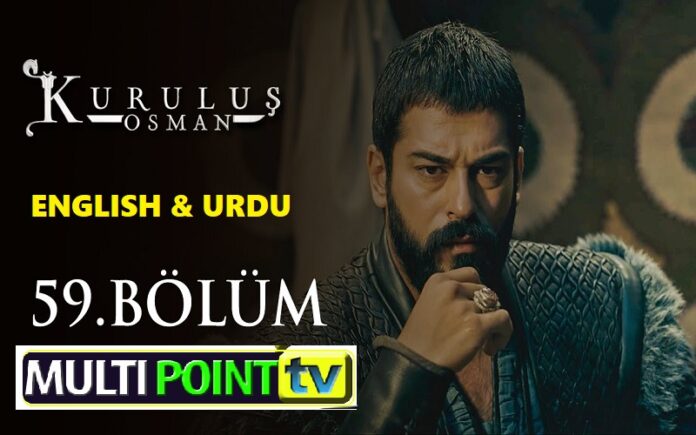 In Kurulus Osman Episode 59, Sheikh once again says that in order to end the problem between the two Beys, Osman and Malhun must marry. Osman is a little surprised by this offer. Sheikh tells Osman that he should think about it. Nikola learns that Umur will not come to attack and gives up attacking Togay. Umur returns to the plain and says he is very angry about what Osman has done. Malhun tries to defend Osman, but Umur takes all her soldiers. Sheikh and Kumral talk about Osman. Osman then returns to his tent and starts talking to Bala. Togay checks the taxes sent by Yason and says that he is waiting to fulfill his oath. Togay says that Osman will send an envoy. Malhun thinks about why her father took her soldiers and then goes to talk to the Alps.

That night, Boran and Gonca go to Osman’s tent to eat. Osman remembers the time he went hunting with his father and begins to tell his memories. Osman tells Boran that they will go hunting the next day and asks him to prepare. After Yason pays taxes to the Mongols, he goes to Inegol and tells Nikola that Osman will also pay tax. Nikola realizes that there is peace between Osman and Togay and says that he will destroy this peace by using Umur. Bala asks Osman why he still hasn’t found a wife and says she will support him no matter what. The next day, Osman speaks first about Togay and tells him that he will send an envoy to him. Osman then talks about Sheikh’s proposal and listens to the Beys’ opinions. Malhun talks to her soldiers and asks them to be loyal to Umur.

While Osman prepares to go hunting, Kumral comes to the plain and says he wants to go hunting with him. Goktug and Cerkutay go to the Mongol military base as ambassadors. The Mongolian soldiers there say they are traitors and a fight breaks out. Goktug says that Osman will pay the tax to the Seljuk State. Togay says that as long as the Mongols earn gold, there will be no problem. Osman goes hunting with the Alps and sees a gazelle. As Osman is about to shoot the gazelle with an arrow, Kumral stops him and tells him that the gazelles are sick. Osman once again remembers his father’s will. Osman takes a rest while the Alps follow a hunt. Meanwhile, Osman has a dream. Osman sees a woman and thinks that woman is Malhun. Osman approaches the woman and realizes that it is Bala.

Osman returns to his tent that night and tells her that he made up his mind. Osman says that he will marry Malhun as Sheikh wishes. Bala is shocked that her father said such a thing, but she never objected. Bala says that if Sheikh wants this, Osman should do it. Bala says that Malhun will give Osman beautiful sons and she wants to be alone from now on. Osman says he made this decision to improve the situation between the two tribes. Osman goes to Sogut the next day and learns from Goktug what Togay said. Osman then goes to Edebali’s shop and tells him that he wants to marry Malhun if Umur gives him permission. Sheikh says he wants to talk to Umur. Meanwhile, Umur is talking to Nikola. Nikola provokes Umur to attack Togay again. Umur accepts his attack offer.

Umur then goes to Sheikh’s shop and Edebali tells him that Osman must marry Malhun to end the problem between the two tribes. Umur accepts this offer and says that he will wait for them in his tent. Bala goes to Sogut to buy something for wedding preparations and then visits her father. Bala says she’s very sorry. Sheikh tells Bala to be patient and everything will get better in time. Nikola tells Helen that before Umur attacks Togay, he will go to the Mongol camp alone and tell them that the Turks will attack them. Helen realizes that before the Byzantine soldiers die, they will eliminate all enemies thanks to Nikola. Osman and Bala pray together that night. Osman says they will visit Umur with Sheikh the next day about the marriage.

Cerkutay prays with Bamsi. Meanwhile, Aygul brings Bamsi’s food. Bamsi says that Cerkutay must now get married and that he will find a suitable wife for him. Cerkutay says he has already found someone suitable for him. While Togay’s soldiers are training, Nikola arrives and tells him that Umur will attack him soon with his all Alps. Nikola says that Osman is aware of this attack and is ready to pay the price if this information is wrong. Osman starts talking to the refugees and says that they can now live freely in Sogut as they want. Christian refugees thank Osman for everything he has done for them. Gunduz then starts talking to Osman and tells him that he made the right decision about the marriage. Bala prepares gifts for Osman to take, and after a short while he sets out to go to Umur’s tent.

Goktug tries to help refugees trying to settle in Sogut. Meanwhile, a woman in the market sees him and drops the apples in her basket. Goktug goes to help the woman and asks her for her name. Goktug then continues to help people. Malhun learns that her father set out with the soldiers. Togay sees Umur and a lot of soldiers approaching and says that Nikola is right. Umur dismounts as they approach the forest and tells them that they will approach the Mongolian headquarters quietly. Edebali and Osman reach the plain of Umur. Osman asks where Umur is. Malhun invites them to her father’s tent. Sheikh says that Umur knows about this visit and asks where he is, but Malhun cannot give him an answer. Sheikh realizes that Umur has not said anything to Malhun and tells her that they came for a good deed.

Kurulus Osman Episode 59 will on air on 19th May 2021. If you feel irritated because of the ad breaks and some other issues, then ads-free permanent access for watching Kurulus Osman episode 58 English subtitles can be achieved by subscribing membership at multipointtv.com by Clicking below blue colored button. you can also download the episode to watch on Big screen TV in 1080 resolution. 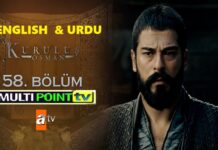