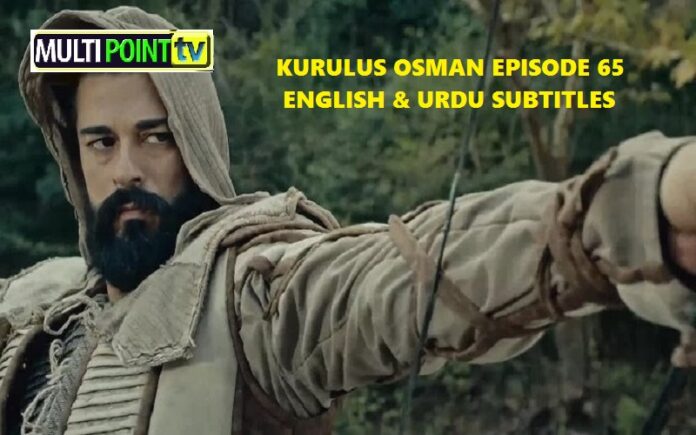 In Kurulus Osman Episode 65, Osman tried to make peace in the region for the Turks in his father’s absence, but Nikola was very uncomfortable with this situation. While Osman was fighting against Nikola, Ertugrul returned to his tribe. Using this situation, Nikola set a trap for Osman. Osman escaped from Flatyos at the last moment and captured the powder kegs in the Byzantine castle. Savci said that Osman’s actions had become dangerous for the Turks and warned his brother harshly. Ertugrul spoke to his sons and gave Savci the mission of the embassy to ensure peace in the region. Dundar was extremely uncomfortable with the situation in the tribe and secretly went to talk to Nikola. Osman wanted to set out before his brother, but Flatyos set a trap for him once again. Osman realized his mistake, but Ertugrul’s plan was already broken. Hazal followed her brother’s plan and started creating new problems in the tribe. Osman started looking for Geyhatu’s son to reconcile with his father, but Nikola took this opportunity to retake the castle. Osman became increasingly suspicious of Yavlak’s actions, but due to his father’s illness, he decided to solve this case later.

Osman did not know that his father was about to die, so he decided to save Targun and went to Kulucahisar. While Nikola was attacking Sogut, Yavlak was declared the new leader of the region by the Mongols. Yavlak made an attack plan with Osman. Targun arrived safely at the tribe, but Bala began to suspect her. Osman said that he would marry Targun to have a son. Yavlak continued to work with Osman and Kulucahisar was again under the control of the Turks. Ertugrul realized that his illness was getting worse and he decided to reveal his will to everyone before he died. Dundar realized that his brother was going to die and immediately took action with Hazal to become the new leader of the tribe. Meanwhile, Nikola secretly sent a message to Targun and asked her to poison the Beys. Ertugrul passed away a short time later. Everyone in the tribe was very upset by this situation, but despite this situation, it was decided to hold an election to determine the new leader after a short time. Dundar secretly gave gold to the voters and tried to change their minds.

Savci initially accepted his uncle’s plan, but during the voting, he realized that Dundar was lying. Savci changed his mind at the last moment and Osman was unanimously elected as the new leader. Flatyos sneaked away after the election. The Pope’s agents have come to the tribe to gather more information about Turks and Osman. After Osman became the leader, he summoned the other Turkish leaders and prepared to hold a meeting with them. Flatyos killed some of the leaders who set out to talk to Osman. While Osman was plotting to take revenge on the Byzantine Empire, Dundar asked Nikola for help to become the leader of the Turks. Goktug pretends to be a spy and says he will help Nikola. With the new soldiers from Constantinople and the support of the Pope’s agents, Nikola attacked Osman but was unsuccessful. Nikola was very angry at this situation and kidnapped Bayhoca to take revenge. While Osman was trying to save Savci’s son, Malhun came and helped him with her soldiers. To thank Malhun, Osman gave a large land to her and her tribe.

After a long hiatus, Togay returned to the border area with his own soldiers and tried to take revenge on everyone. Malhun thought that Osman was a spy in his tribe and tried to find this spy. The Pope’s spies decided to work with Togay to eliminate Osman and gave him important information for his next attack. Togay injured Umur and this caused great unrest among the Turks. While Osman was trying to avenge Bayhoca, he also tried to find out who injured Umur. After fighting with Bamsi, Cerkutay, who worked for Togay and Mongolians before, changed his mind and started living with the Turks. After Umur got better, his relationship with Osman got worse and worse. Nikola realized this situation and offered Umur a commercial agreement. Umur accepted this deal to gain both money and power and secretly made a plan about attacking Inegol Castle.

Osman told Umur that he should not trade with the Byzantines and warned him harshly, but Umur did not care what he said. While Umur was preparing to send a trade caravan to Inegol, Abdurrahman lost his life as a result of Togay’s sudden attack. Osman stopped the group that Umur sent to Inegol. Osman told Malhun to go back and told everyone that Dundar was the traitor among the Turks. While Dundar was hiding in Nikola’s castle, Osman made a deal with the Pope’s spies and thus got Nikola out of the castle. Osman declared Dundar’s sentence to be death and killed him in the camp. Osman then executed the Pope’s spies and said that everything would be better now. Meanwhile, the Byzantine Emperor’s son summoned Nikola and gave him one last chance. In order not to waste this chance, Nikola took action together with a commander from Macedonia. Geyhatu could not bear Togay’s rebellious actions any longer and caught him before Osman. Osman defeated the Macedonian commander and Nikola after a huge war. A short time later, Osman married Malhun to fulfill his father’s will even though Bala was upset about this marriage. After Osman destroyed the entire Byzantine army, he returned to his tribe and told everyone that Malhun had given birth to a baby boy.

The second season of the TV series, which is watched with enthusiasm and admiration by all the audience, will start to be broadcast again after the summer vacation. In the trailer videos published on the Youtube account of Kurulus Osman, it was announced that the television series will be broadcast in Turkey on Wednesday, October 6 at 20:00. (Turkey Time).

Kurulus Osman Episode 65 will on air on 6th October 2021. If you feel irritated because of the ad breaks and some other issues, then ads-free permanent access for watching Kurulus Osman episode 65 English subtitles can be achieved by subscribing membership at multipointtv.com by Clicking below blue colored button. you can also download the episode to watch on Big screen TV in 1080 resolution.