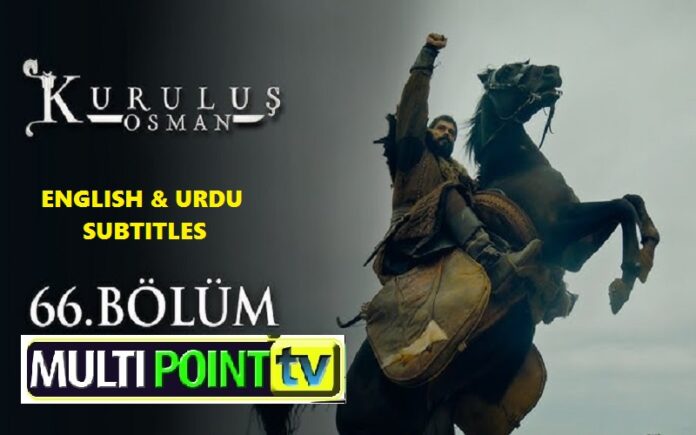 In Kurulus Osman Episode 66, Osman and his Alps act like Byzantine soldiers. A priest and his assistant try to escape from someone in the forest. Cerkutay takes a raft and finds this priest. The priest thinks Cerkutay is Laskaris’ soldier and sets out with him. Osman meets with his other soldiers and says they will kidnap the priest. The priest and his assistant realize that something is wrong. The priest’s soldiers stop Cerkutay and realize that he is a Turk. The soldiers tie an anchor to Cerkutay’s feet and throw him into the river. A short time later, Catalan soldiers working for Kosses attack the priest. Laskaris’ soldiers try to stop the Catalans. The priest realizes that his life is in danger and tries to escape on the small raft in the river. Osman sees that someone is attacking the priest and takes action to use this opportunity.

Osman kills the Catalan soldiers and captures the priest. Cerkutay loosens the ropes in his leg and saves his life at the last moment. Pastor Gregor learns that the man who kidnapped him is Osman and tells him how much he hates him. Laskaris learns that the priest has been kidnapped, but can’t figure out who did it. As Kosses learns that his sister is on her way from Constantinople, the leader of the Catalan soldiers arrives and tells him that someone has kidnapped the priest. Malhun’s assistant secretly follows Bala and learns that she is actually pregnant. Osman goes to meet Sheikh and talks to him about recent events. Cerkutay returns to the plain and takes medicine from Kumral to heal. Gokce tells Malhun that Bala is pregnant. Malhun is very surprised by this news and gets very worried.

Malhun starts to think that Bala is secretly planning something. That night Kosses and Laskaris go to Inegol to talk to Nikola. Nikola greets his guests shortly after and they all start to eat together. Nikola tells his friends that Gregor escaped from the emperor’s dungeon and then someone kidnapped this priest. Rogatus Laskaris says it is very important to get Gregor because he is someone important. Nikola says that Osman has captured the priest. While the priest is planning to escape from his tent, Osman arrives and tells him that he already knows everything. Nikola says that Osman is getting stronger and that if the Lords do not stay together, they will perish. Laskaris and Kosses accept Nikola’s offer. Osman asks Gregor to trust him, but the priest rejects this offer.

Osman spends some time with his son Orhan and then goes to his tent to eat. After the meal, Osman tells all the youth and children that they should learn Turkish traditions. Malhun has a dream that night. In Malhun’s dream, Bala’s to be born son kills Orhan. Malhun wakes up in fear and begins to worry about her son’s life. Osman then has a meeting with the Beys and talks about the wars they fought last year. Gunduz says he is worried about the newly arrived Turks. Osman listens to his brother and realizes that he is right. Osman gives several new orders to control the newly arrived Turks. A Bey named Turgut attacks Mari’s car and catches her in order to save the Turks in the hands of Kosses.

After the meeting is over, Laskaris comes to Osman’s tent and says he wants to be friends with him. Osman says he was friends with Leo before and wants to maintain this good relationship. Kosses learns that his sister has been kidnapped and sets out to talk to Osman about it. Laskaris starts asking questions about Gregor’s abduction, but Osman says he has no knowledge about it. After the lord comes out of the tent, Gunduz says that this priest will cause more trouble. Bala visits her father and tells him she is pregnant. Turgut takes Mari to his camp and says he will host her until he gets his soldiers back. Kosses goes to Osman’s tent and says he brought a horse for Orhan. Osman is happy with this gift. Kosses says his innocent sister was kidnapped by the Turks and asks Osman for help.

Osman listens to Kosses and says he will help him. Someone sends a poisonous snake to Mari’s tent to kill her, but Turgut saves her. A short time later, Osman and his Alps go to Turgut’s tribe. Osman says he wants to talk to Turgut and asks him why he kidnapped Mari. Turgut tells Osman everything about his soldiers. Osman makes a promise to save the Turks in Kosses’ castle and takes Mari from Turgut. Osman sends Mari with Boran to the castle of Kosses immediately. Meanwhile, Kosses’ soldiers cut off the fingers of the captive Turks one by one. Kosses says that the captive Turks can no longer use swords or bows. Boran brings Mari to the castle and demands captive Turks. Kosses thanks Osman for his help. Boran sees that all the captives are injured, but can’t do anything.

Malhun talks to Bala and asks her if she is pregnant. Bala says she is pregnant but asks Malhun to keep this secret until the right time. While Boran was taking the Turks to Turgut’s tribe, Byzantine soldiers attacked. Boran and Goktug try to defend the wounded Alps but they can not do it. All of Turgut’s soldiers die on the way because of that ambush. That night, someone sneaks into the stable secretly and poisons Osman’s horse. Malhun tells Osman that Bala is pregnant. Osman starts to talk about Bala and asks Malhun not to worry about the future. A short time later, Boran returns to the tribe and says that Byzantine soldiers killed the Turks at that ambush. Osman is very angry at this news and is sad because he could not keep his promise to Turgut. Osman immediately goes to the stable to set off for revenge, but he sees that his horse was killed by someone. Osman sees this situation and is shocked.

Kurulus Osman Episode 66 will on air on 13th October 2021. If you feel irritated because of the ad breaks and some other issues, then ads-free permanent access for watching Kurulus Osman episode 66 English subtitles can be achieved by subscribing membership at multipointtv.com by Clicking below blue colored button. you can also download the episode to watch on Big screen TV in 1080 resolution.