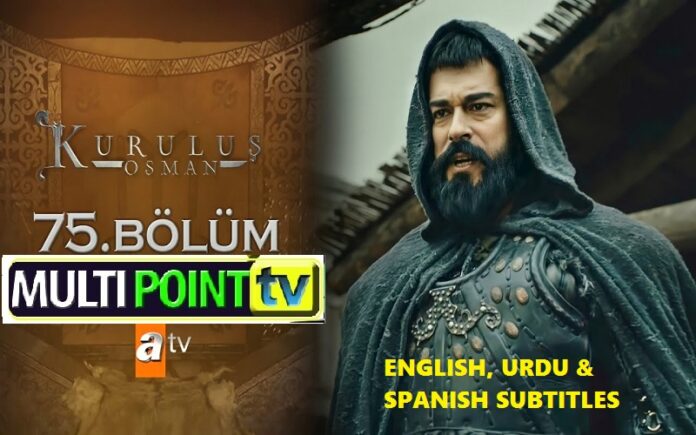 In Kurulus Osman Episode 75, After the explosion, Osman tries to get his soldiers out of the cave. Rogatus sees Osman trying to find the other entrance of the mine and attacks him. Cerkutay and the Alps try to get out of the mine, but a tunnel collapses in the meantime. Osman then starts to take out the soldiers one by one. Nikola captures Turgut and Mari. Mari asks Nikola to calm down, but he begins to torture Turgut. Mari repeatedly begs Nikola to stop. While Abdal was looking for medicinal plants in the forest, he saw that Nikola caught Turgut. Abdal immediately returns to the tribe and tells Malhun what he saw in the forest. Osman kills Rogatus’ soldiers and tries to capture him, but Goktug stops him. Osman then returns to the mine and tries to get the injured Alps out there.

Nikola continues to torture Turgut. Osman takes the dead Turks out of the mine and sets out to go to the tribe. Together with Malhun, Abdal starts looking for Turgut. While Nikola is thinking of killing Turgut, Abdal comes. While Nikola is trying to understand how Abdal came to the forest, Malhun attacks and saves Turgut. While Kosses is trying to understand what is going on, Mari escapes with Malhun and goes to the Turkish tribe. The Seljuk vizier Alemshah comes to the border region and says that he will change the order here. While Turgut is about to go to the doctor in the tribe, Osman comes with the dead soldiers. The Turks feel very sad when they see so many martyrs. Osman talks to Turgut and learns what happened from him. Julia begins to torture Boran and tells how she killed Gonca. Later, Rogatus comes and continues to torture Boran.

Boran says he will avenge his wife no matter what. Kosses says he will get Mari back and sends Nikola back. After Turgut heals his wounds, he says that Kosses will come to get Mari. Osman says he will not give Mari to anyone and then they will go to save Boran. Kosses comes to the tribe after a short time and says he wants to meet Osman. Osman accepts Kosses into his tent. Kosses says Mari has been kidnapped and asks Osman for her. Osman tells that he did not kidnap anyone and that Mari stayed in the tribe of her own accord. Later, Mari comes and says that she will not return to the castle. Nikola returns to the castle and tells Rogatus what happened in the forest. Rogatus says he caught Boran. That night, Turgut talks to Mari and asks her not to be upset. Kosses returns to the castle.

When Nikola sees that Mari has not come back, he gets angry with Kosses and attacks him. Rogatus calms his friends and reminds them of their previous promise. Nikola tells that someone is coming for help. Meanwhile, the Vizier comes to the castle. Alemshah says that there was great turmoil in the Byzantine lands. Osman eats that night with his family and guests. Sheikh calms Mari and tells her that he will go to Konya soon. Kosses says he will ask the Emperor for an army to take Mari from Osman. The vizier calms Kosses and says that he will establish a new order in these lands. The vizier says he will get Mari back and asks Nikola to use Boran. Boran has a dream while sleeping in the dungeon. Boran talks to Gonca in his dream and tells her how much he misses her. Gonca asks Boran to be strong and leaves after a short time.

Nikola says he wants to kill Boran to teach all his enemies a lesson, but the Vizier begins to tell him about another plan. Hera goes to the tribe at her father’s request and starts talking to Goktug. Goktug then takes Hera to Osman’s tent. Osman says that they will save Boran thanks to Hera. Aygul goes to Cerkutay’s tent and says she is very worried about him. Cerkutay says he is thinking about Boran. Aygul says she has been thinking about Cerkutay for a long time and wants to marry him. Osman prays to Allah that night and asks him for help once again. The next morning, just as Osman was about to set out to save Boran, the Vizier came to the tribe. The vizier goes straight to Osman’s tent and begins to speak harshly to him. The vizier complains about Osman’s selfish actions and says that the tax he has to pay has doubled.

Osman tells the Vizier that he will arrange a place to stay at Sogut for him and sets off immediately. Nikola goes to the dungeon and begins to torture Boran. Boran says he will take his revenge. Osman disguises himself in the forest with his soldiers. Osman says that he will enter Inegol by using Hera’s car. Osman says they will save Boran by using the swords in the car and asks his soldiers to be very careful. Nikola’s soldiers take Boran to the city square and tie him up with ropes. Nikola says that Boran was Osman’s most loyal soldier and that he had killed many Christian soldiers before. The Byzantine people got very angry after what Nikola said and started throwing stones at Boran. Boran prays to Allah and begins to wait. Abdal tells the children of the tribe a story about how Hamza died.

When Hera’s car was about to enter Inegol, Byzantine soldiers stopped the car. One of the guards says he wants to search the car. Hera gets out of her car and tells the soldier that this car belongs to the governor. The soldiers open the gate of the castle and let the car inside. Osman and the Alps sneak out of the car. Goktug and Cerkutay begin to give swords to their friends in Inegol. The Alps secretly take their swords and wait for the attack. The vizier visits Edebali and says he wants his support. Sheikh says he will only support what is right. The vizier realizes that he cannot get his support and immediately sends a message to Kosses. Osman gradually approaches Boran and tries to talk to him, but this man is not Boran. Nikola comes out of his hiding place and says he will kill Osman. While Edebali is going to Konya, Kosses sets a trap for him and attacks him.

Kurulus Osman Episode 75 will on air on 15th December 2021. If you feel irritated because of the ad breaks and some other issues, then ads-free permanent access for watching Kurulus Osman episode 75 English subtitles can be achieved by subscribing membership at multipointtv.com by Clicking below blue colored button. you can also download the episode to watch on Big screen TV in 1080 resolution. 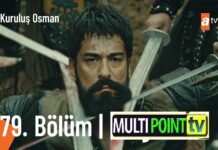 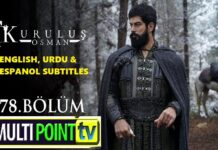 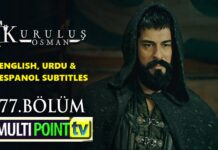 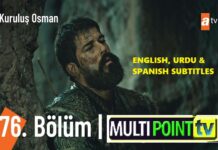 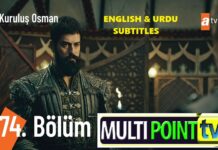 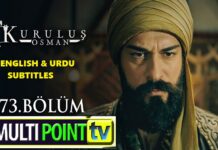