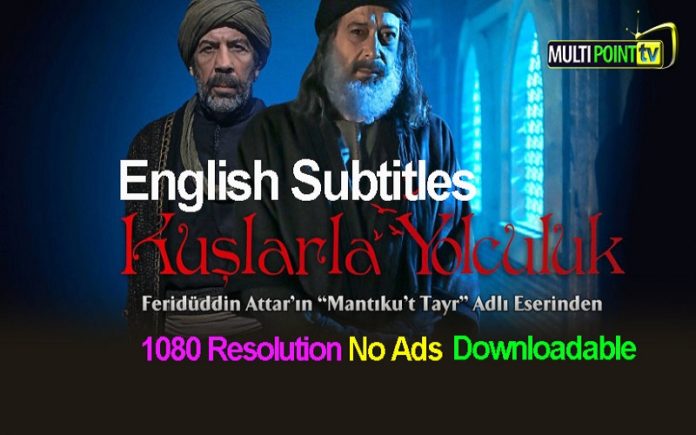 The subject of this work: hoopoe, dove, pigeon, parrot, partridge, nightingale, peacock, turtle dove, and hawk species start talking to each other. These birds talk about the fact that every country has a Padishah (king) and talk about having a ruler in their birds. Hoopoe begins to speak and mentions that the king of birds is a bird named Simurgh. But Simurgh lives far, far away. All the birds listen to Hoopoe and prepare to hit the road under his leadership. This road is long and very difficult. Other birds start giving up one by one, but Hoopoe convinces them. The birds continue to advance. Hoopoe tells them that they have to go through seven valleys to reach Simurgh. These valleys are; quest, love, knowledge, detachment, unity, wonderment, and poverty. Thousands of birds begin to advance in these valleys. Some birds get sick, some hunted by other animals. Finally, thirty birds reach where Simurg is and they understand that they are Simurgh himself. Farid Ud-Din Attar’s book is full of symbols and messages with lots of advice.

The journey with the birds is inspired by this book and tells the story of nine dervishes representing the birds looking for Simurgh. There is a Sheikh who helps these dervishes and tries to illuminate their path. A traveler escaping from the bandits’ attack comes to these dervishes and asks for help. This traveler begins to talk about the places he traveled and saw. A dervish listens to this traveler and is impressed. This dervish represents the partridge in Attar’s story and is challenged about trade.

Then the traveler tells a story about a mosque and affects another dervish Fazil. This dervish admires the knowledge of the mosque and is impressed, and one day, when he writes what Sheikh said to him, he decides that he wants to write a book about the Sultan and work for him. Meanwhile, the clerk of the Sultan comes to the lodge and tells Sheikh that Fazil must work in the palace for a while. Fazil cannot resist this offer and goes to the palace. Fazil now begins to live in the palace. Fazil’s story is compared to a hawk standing in a cage. Fazil works with all his might in the palace and does everything to rise further. The test of Fazil in the palace will not be easy.

The next story is about Sami. Dervish Sami does not like a decision made by Sheikh and is very angry. Sami stops working overtime. Sami is fascinated by a story told by the traveler and begins to be arrogant. Sami’s story represents the peacock. Dervish Kerem’s test is about love. Kerem goes to the market one day and falls in love with a girl he sees. Kerem is ready to do anything to go to the market again. Sheikh warns Kerem, but Kerem has already begun to burn with the fire of love. Kerem’s story was inspired by the nightingale in Attar’s book.

One day, the traveler who came to the lodge speaks about horses and tells a story about Hazrat Ali’s horse. Bahri listens to this story and begins to think his horse is too fast. Bahri’s exam is told in the goose and turtle dove sections. The next story is the owl episode. Dervish Enes listens to the entertainment venues narrated by the traveler and wants to see them. When Enes goes to the city, he cannot hold himself and enters one of these entertainment venues. Here, all kinds of evil happen to Enes, but it is too late for him now.

The stories told by the traveler continue to impress everyone and turn to Yunus. Even though Yunus is very hardworking, after talking to the traveler, he decides that there is no need to work that much and thinks that praying will be enough. Sheikh gives Yunus a task and Yunus takes a long journey that will change his life. The name of this story is the wagtail bird. One day, the traveler tells a story about the famous Seljuk vizier Nizam al-Mulk and this story affects Suleiman very much. A few days later, Sheikh goes somewhere and authorizes Suleiman before he leaves. With these new powers, Suleiman thinks that he can make things on the lodge better, but at the same time he starts to be tough against other dervishes. This story is inspired by the legendary Huma bird.

The traveler thinks that he spent enough time on the lodge and prepares to set off again. Sami will accompany the traveler to the city, but unexpected events happen on the road. Traveler and Sami lose each other. When the traveler searches for the dervish, he finds a river and thinks that the water he found is the fountain of youth. The traveler drinks from this water and goes to the forest to search for Sami. Meanwhile, Sami tells to Sheikh what happened. The traveler gets tired and sleeps. Having a dream in his sleep, the life and quest of the traveler changes. The traveler goes back to the lodge and talks to Sheikh. The continuation of the series is inspired by the valleys in Attar’s book. The traveler begins to live in the lodge and experiences events inspired by these seven valleys. The events and exams that take place in the lodge deeply affect the traveler’s life. One day, Sheikh gets sick and the dervishes realize that he will die. Sheikh says that before he dies, one has to find himself before he can reach the truth.

How to Watch Kuşlarla Yolculuk Series with English Subtitles

You may watch Kuşlarla Yolculuk Full Series with English Subtitles by subscribing membership on Multipoint TV.

Those who are searching for watching Kuşlarla Yolculuk Full Series with English Subtitles Free of Cost, may watch here. Each successive episode of Kuşlarla Yolculuk Series will be uploaded here gradually. You may watch all the missed episode by clicking the link given below.