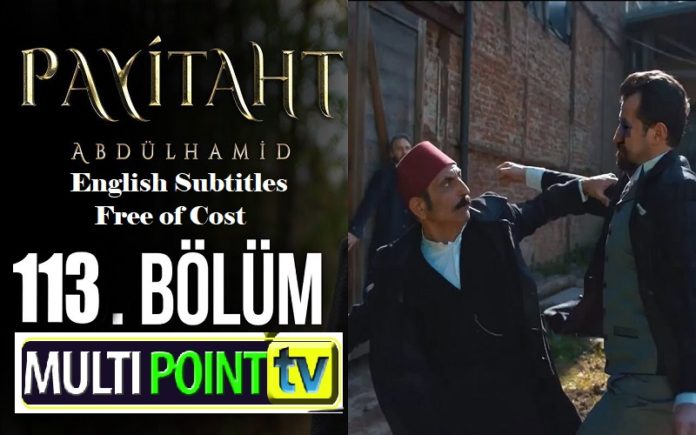 In Payitaht Abdulhamid Episode 112, Sultan Abdulhamid examines the model he received from Hechler and reveals the hidden map. Herzl drew this is the map at the first Zionist Congress. The Zionists want to establish a state in oil-rich lands between the Nile and the Euphrates rivers. Robert comes to Hechler and learns that the temple model is in Sultan Abdulhamid. Hechler is committed to getting the railroad business. Meanwhile, Mr. Brain arrives and says he has been sent by the minister to help. Bidar Sultan goes to the Society and sees Gulcemal crying. Gulcemal says that she was crying because she could not go to Mehmet Efendi. Naime Sultan tries to comfort Gulcemal. Bidar Sultan asks Madame Blavatsky why the soup kitchen was closed. Madame Blavatsky says that there are pests at the mansion and that the place is unusable because it is sprayed. Ahmed Pasha brings Zalman to Hunkar because Zalman wants to tell important things. Zalman says that the British have forgotten him and wants to make an agreement with Hunkar to be released. Hunkar accepts Zalman’s offer. Zalman’s crimes have been forbidden, but Ahmed Pasha will follow him and if he betrays again, he will be punished again. Hunkar calls Pashas with him and talks about the railway. Despite lies and slander, Hunkar says he will do the railroad with the Germans. Hunkar will establish a wireless telegraph base in Antalya in order to better communicate with the lands in northern Africa so that storms in the Mediterranean cannot harm the communication.

In Payitaht Abdulhamid Episode 112, Ahmed Pasha and Selim follow Zalman. Hunkar says that the British have buried weapons to be used in a possible war around Anatolia and Syria. Now, Hunkar has only one purpose, to get maps showing the location of weapons from the embassy. So Hunkar calls Halil Halid and tells him that these maps should be taken from the embassy. Halil Halid accepts this task. Bidar Sultan and Naime come back to the palace and see Zekiye Sultan. Zekiye Sultan tells them that it is better to come without informing. Zekiye Sultan gives gifts to those in the palace and goes to see her father. Hunkar and Zekiye Sultan talk. Hunkar asks Zekiye Sultan to lead the Harem. Naime Sultan is uncomfortable with the arrival of Zekiye Sultan. Mahmud Pasha goes home and talks to Frida. Frida tells him that she has a legacy and has to go out to get things done. Mahmud Pasha asks her to come back after she has done her work. Frida agrees and goes out. Then Mahmud Pasha goes out to follow Frida. Halil Halid and other agents talk about their new assignment and make a plan. Frida goes to Zuluflu Pasha and asks about her father. Zuluflu Pasha tells Frida what is going on lately. Frida asks about the new British ambassador and says she needs to get close to him. Zuluflu Ismail Pasha tells that he is not a traitor. Mahmud Pasha sees Frida as she leaves Zuluflu Pasha’s house and continues to follow Frida.

In Payitaht Abdulhamid Episode 112, Frida goes to Hechler and tells him that she brought important information about the palace. Frida says that Zalman is free, but Hechler doesn’t think this information is important. Frida then says that Abdulhamid knows the weapons buried by the British and is looking for maps. Hechler accepts Frida’s desire to work with him. Shehzade Abdulkhadir and Meziyet speak in the garden, but Meziyet is afraid to read what she wrote. Hechler comes to the palace and wants to see Hunkar, but Hunkar does not accept that. Hunkar gives Hechler new jobs for the railroad to save time. Nadir Bey makes suspicious movements and gets attention in front of the British embassy. British agents catch Nadir Bey and get the secret note from him. Soghutlu plans a plan to get closer to Diana and invites her for a meal. Hechler comes to the embassy and examines the message. Mahmud Pasha goes to Zuluflu Pasha and says he knows everything. Hechler says that Hunkar wants a guarantee and arranges a meeting. The former ambassador offers to show the income of the tobacco factory in Izmit as a guarantee. Hunkar calls Mahmud Pasha and Zuluflu Pasha and tells that the railway agreement will be made with the Germans. Hechler learns that the letter from Nadir Bey is part of a plan and realizes that the Ottoman agents will attack the British embassy.

In Payitaht Abdulhamid Episode 112, Zekiye Sultan talks to women working in Harem and gives advice to them. Marco comes over to Madame Blavatsky and says he has found the well they are looking for. Madame who gets this news is very happy. Hechler comes back to Hunkar and tells him that he has done what is necessary for the guarantee. Hunkar does not accept this job and asks him to find a new guarantee. Hechler says he will find a new guarantee, but Hunkar says he wants a different route. Meanwhile, Mahmud Pasha signs the railway agreement with the Germans. Then Mahmud Pasha talks to Zuluflu Ismail Pasha and asks him to let go of the Frida’s money. Hechler comes to Robert and talks about the Ottoman agent at the embassy. Hechler tells the plans of the Ottoman agents to get the map at the embassy and asks Robert to stay at the embassy. Zekiye Sultan and Naime Sultan start talking in the garden of the palace, but Naime gets angry with Zekiye because of what happened in the past and tells her that she will never understand her.

In Payitaht Abdulhamid Episode 112, Hunkar wants to see all his family at dinner and calls Bidar Sultan too. Naime Sultan goes to Shehzade Abdulkhadir and tells Zekiye Sultan that she has brought her a letter from Kemalettin. Abdulkhadir is very angry. Hunkar gives one of his chests to Hakki Bey and asks him to sell it for Medina. Naime Sultan is very annoyed by Zekiye Sultan’s cooking and being good with Hunkar. Selim confronts Zalman. Zalman says that Sultan Abdulhamid forgives him and is free, but Selim punches him. Hechler and Hunkar go hunting. Madame, Marco, and Anna go into a well and start moving through vestibules. Hechler offers Hunkar the deal and asks him to sign it. Meanwhile, the Russian ambassador arrives and says that he is against this new route. Hechler doesn’t care about this, but the Russian ambassador says he spoke to the British government and they didn’t want it either. A group of armed men stops them as Madame Blavatsky advances through the corridors to reach the Yildiz Palace. Mahmud Pasha brings the agreement to Hunkar and Hunka signs the railway agreement.

In Payitaht Abdulhamid Episode 112, Zalman opens his eyes and finds himself in a house. Selim cannot stand the words of Zalman any more and pulls his gun. Then Selim cuts Zalman’s neck and punishes him. Mahmud Pasha comes to Frida and gives her a gift. After telling her where Frida’s land is, Mahmud Pasha gets angry at her and gets his gift back. The men tie Madame’s hands and take the key, miswak, and ring from her. Robert and his agents talk about their plan to kill Ottoman agents. While Soghutlu and Diana go to eat, Tatar Bey and agents catch them. Robert says he will meet someone from the palace, and he leaves the embassy, ​​but this is not true. Robert draws something on a saddle and sends it with the horse from the stable. Frida comes back to Hechler and says that Sultan Abdulhamid has signed the agreement with the Germans. Hechler gets very angry and orders the newspapers to report fake news. The horse sent by Robert goes to Soghutlu. Soghutlu tries to remember the meaning of the sign in the saddle and notices the trap. Soghutlu goes to Halil Halid and warns him.

In Payitaht Abdulhamid Episode 112, Ahmed Pasha comes to Hunkar and says that Selim killed Zalman. Robert comes back to the embassy and asks what happened, but Goldschmidt says he is a traitor. Hechler comes to the palace and says there will be news in the newspapers. Halil Halid tells Hunkar that he cannot get maps. Hunkar says the agent among the British is Robert and asks Halil Halid to meet him. Robert says he’s not a traitor and Mr. Brain may be a traitor. Goldschmidt does not believe him. Zekiye Sultan says that her father is not happy and that she will do something to change this situation. Hechler comes to Hunkar and says that he will either sign this agreement with the British or endure his results. Hunkar says he will sign the agreement. Goldschmidt goes somewhere with Robert, but Halil halid and the agents follow them. Robert sends a message to the Ottoman agents using the telegram machine in Brain’s room. After the message sent by the agents, Goldschmidt believes Mr. Brain is a traitor. While Hunkar and Hechler are drinking coffee, Ahmed Pasha comes and gives maps of the weapons buried by the British to Hunkar. Hunkar looks at the maps and tears the railroad agreement.

Without ads, permanent access to Payitaht Abdulhamid Season 4 Episode 113 and many more can be achieved by subscribing membership on Multipoint TV by Clicking below button. 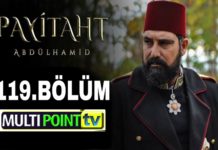 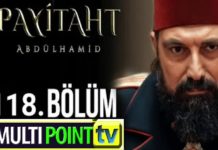 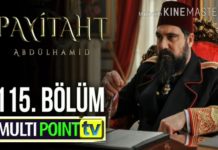 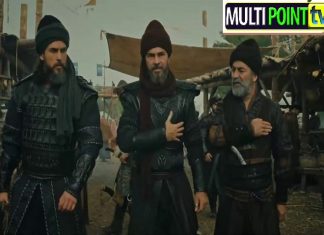 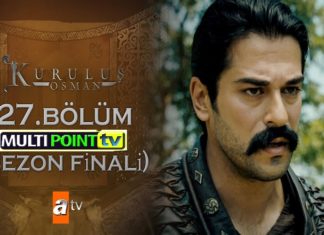