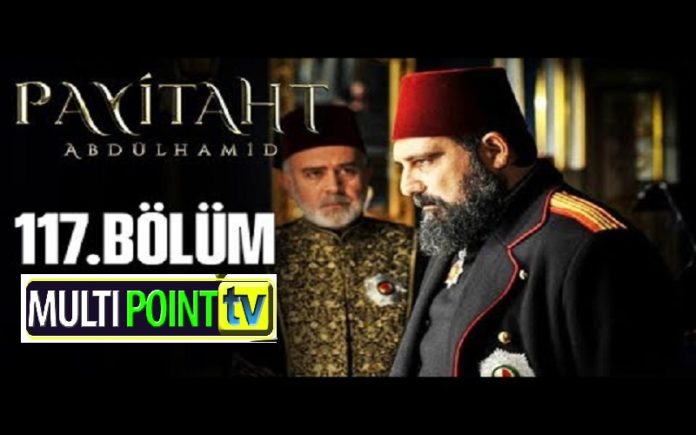 In Payitaht Abdulhamid Episode 116, Hechler tells Sultan Abdulhamid that the explosions in the city happened with Pashas’ order. Hunkar does not accept this situation and talks about the justice of the Ottoman state. Hechler threatens Hunkar to reannounce the constitution and reopen parliament. Halil Halid tries to find Goldschmidt after the explosions. Hunkar orders to find the document signed by the Pashas and Pashas. Halil Halid tells Ahmed Celaleddin Pasha that Goldschmidt did the explosions. Zekiye Sultan accuses her sister Naime because of the news in the newspaper, but Naime rejects these charges. Bidar Sultan talks to Hunkar about Zekiye Sultan. Hunkar does not believe in accusations, but still orders that Zekiye will be placed under arrest in her room and search for her room. Hunkar then talks to Ahmed Pasha about Zuluflu Ismail Pasha because he feels that his brother is doing the wrong things. Prince Sabahaddin and Frida go to the embassy. Frida says that Sabahaddin has something to say about Mahmud Pasha. Sabahaddin says his father is still working for Sultan Abdulhamid. Hechler, who hears this, is very surprised.

In Payitaht Abdulhamid Episode 116, Halil Halid fights with Goldschmidt and catches him. Hunkar asks Ismail Pasha why Hechler insisted so much on the constitution and parliament. Zuluflu Ismail Pasha says that the main reason for these is to weaken Hunkar’s power. Ahmed Celaleddin Pasha comes to the palace and tells that they cannot find anyone. After Zuluflu Ismail Pasha left the room to rest, Ahmed Pasha says that the agent following Zuluflu Pasha was killed. Bidar Sultan finds the bottle in Zekiye’s room and sends it for examination. Meanwhile, Shehzade Abdulkhadir and Meziyet come back to the palace. Hechler comes to the palace and says that he has contacted Pashas’ kidnappers. According to Hechler’s new proposal, Hunkar will reannounce the constitution and reopen the parliament and declare Sabahaddin as the new heir.

In Payitaht Abdulhamid Episode 116, Hunkar gets very angry and says that Hechler has crossed the line. Before Hechler leaves the palace, he says that Hunkar does not have much time, and more explosions would happen if what he said was not done. Bidar talks to Abdulkhadir and Meziyet. Halil Halid tries to make Goldschmidt speak. Goldschmidt says he doesn’t know about bombs. Halil Halid then shows him the death order issued by the court about Goldschmidt. Diana notices Soghutlu on her way to the newspaper and calls him. Goldschmidt insists not to speak, but Halil Halid tries to kill him. Goldschmidt says he will tell everything to save his life. Diana and Soghutlu go to the newspaper together, but Diana does not say anything to him. Bidar Sultan learns that Sinan is ill and decides to send him to a hospital outside the palace for precautionary purposes.

In Payitaht Abdulhamid Episode 116, At the request of Hechler, Sabahaddin prepares an article explaining how the state will be saved and provoke the people against Hunkar. Hunkar calls Hakki Bey and talks to him about Zuluflu Ismail Pasha. Hakki Bey says Zuluflu Ismail Pasha is loyal to his state, but Hunkar asks him to get close to Zuluflu Ismail Pasha again. Hechler makes a plan to ensure that Hunkar trusts Zuluflu Ismail Pasha more and declares Ismail Pasha the heir. Halil Halid talks to Soghutlu and gets angry at him. Hunkar talks to Zekiye Sultan and says he believes he is innocent. Zekiye Sultan tells that she is very upset. Hunkar then asks Zekiye to make a decision about Ali Nureddin. Hechler goes to the dungeon of the embassy to see Mahmud Pasha and talks to him about Zuluflu Ismail Pasha. On the same night, Mahmud Pasha sneaks out of the dungeon and tells Hechler’s plan to Ahmed Pasha. Meanwhile, Hechler and Sabahaddin go to the dungeon and realize that Mahmud is sneaking out. Goldschmidt plans to save his life using the news in the newspaper, but Halil Halid does not release him. Hunkar talks to Shehzade Abdulkhadir and says his best wishes

In Payitaht Abdulhamid Episode 116, Bidar asks permission from Hunkar to visit the sick child. Meanwhile, news comes to Hunkar and it turns out that the poison that caused the woman’s death came out of the bottle taken from Zekiye’s room. Dilruba decides to secretly use the virus to kill Meziyet. Madame Blavatsky learns this and allows Dilruba. Madame then sends a message to Dilruba to forward it to Zekiye. Selim starts to wait around the theater building. Ahmed Pasha talks to Selim and tells him to handle this job calmly. Hakki Bey goes to Ismail Pasha’s house and talks to him. Ismail Pasha tells Hakki Bey that he will give a secret and talks about his deceased child. The questions asked by Hakki Bey make Ismail Pasha think. Ahmed Pasha comes to the palace and tells Hunkar what he learned from Mahmud Pasha.

In Payitaht Abdulhamid Episode 116, Ahmed Pasha also says that he understands that Mahmud Pasha is exposed. After learning this information, Hunkar understands Hechler’s plan and says the heir is Mehmet Resad. Bahri starts talking to the girl in front of the theater, but agents around him notice it. Bahri begins to escape, but Selim catches him. Ahmed Pasha learns the news of Goldschmidt in the newspaper and talks to Halil Halid about it. Halil Halid says the news is a lie and gives Ahmed Pasha documents showing that Goldschmidt is lying. Tahsin Pasha reads the message of Hechler about the constitution and parliament to Hunkar. Hunkar secretly sends a telegram to Hechler to learn his views about declaring Ismail Pasha a crown prince instead of Sabahaddin. Hechler orders Diana to take Goldschmidt back.

In Payitaht Abdulhamid Episode 116, Halil Halid publishes news that refutes the news of Goldschmidt and shows it to Goldschmidt. Selim brings Bahri to the palace. Halil Halid connects dynamites to Soghutlu’s and Goldschmidt’s bodies. If Goldschmidt does not bring the document to Halil Halid, the entire embassy building will be blown up. Ahmed Pasha says a soldier has been caught. Hunkar calls Ismail Pasha and Hakki Bey and goes to the dungeon to interrogate the treacherous soldier. Hunkar asks where the Pashas are. Bahri and Ahmed Pash will go to Galata together. Later, Hunkar says he knows that Hechler is behind this job and asks who else is behind this job. Bahri says Zuluflu Ismail Pasha’s name. Goldschmidt and Soghutlu go to the embassy and start searching for documents. Meanwhile, Diana arrives and Goldschmidt says Soghutlu is a double agent working for the British. Hunkar asks Hakki Bey about Ismail Pasha. Hakki Bey tells Ismail that he has told her a secret and tells that secret to Hunkar. Goldschmidt finds the document and gives it to Soghutlu. Mahmud Pasha knocks the man who comes to the dungeon to give a meal and starts to run away. Mahmud Pasha accidentally enters a room and sees Sabahaddin there. Sabahaddin tries to speak to his father. Mahmud Pasha gets angry with his son and attacks him, but he cannot kill him. Hunkar calls Ismail Pasha and says he will declare him as the new heir.

In Payitaht Abdulhamid Episode 116, Mahmud Pasha tries to change his son’s decision, but Sabahaddin says it’s too late for everything. Sabahaddin and Mahmud cry together. Zekiye Sultan receives a message from whom someone unknown, and in this message, it writes that she needs to go somewhere to clear her name. While Bahri is waiting for a message, he catches a child and takes a hostage. Ahmed Pasha and Selim desperately watch him and try to catch him. Halil Halid takes the document from Goldschmidt and sets out to go to the palace. Ahmed Pasha comes to the palace and tells that Bahri has escaped. Hunkar, who hears this, realizes that the only remedy is to proclaim the constitution and decides to do so. The next morning, Tahsin Pasha goes to the British embassy and tells that he will take Hechler from there and take him to the palace. Thinking that the constitution was reannounced, Hechler says he ordered Pashas to be released. Bidar Sultan learns that Zekiye has left the palace. Zekiye secretly goes to the address that says in her message and Madame locks her in a room. Hunkar tells Hechler that the document Pashas signed is in his hands. While Hechler thinks that the constitution was declared, Mahmud Pasha tells the facts to Hechler. Hunkar orders Ahmed Pasha to arrest Zuluflu Ismail Pasha.

Without ads, permanent access to Payitaht Abdulhamid Season 4 Episode 117 and many more can be achieved by subscribing membership on Multipoint TV by Clicking below button.

Have you Enjoyed Episode 117?