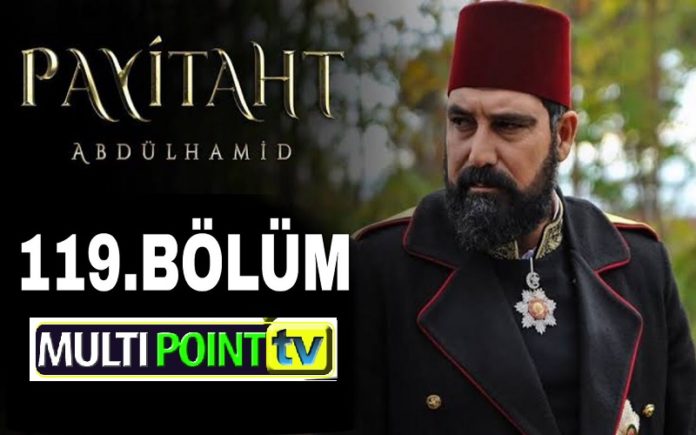 In Payitaht Abdulhamid Episode 118, After Sultan Abdulhamid learns Hechler’s plan, he says he will make reforms in Rumelia so that the emperors of Austria and Russia cannot interfere with the Ottoman lands. Hechler, who learns that Abdulhamid will reform, becomes helpless. Halil Halid and other agents are trapped inside a house. Halil Halid tells Soghutlu to go out of the chimney and open the door of the house. Meanwhile, Nadir Bey has already taken action. Soghutlu goes out and sees Nadir Bey stopping British agents. Sultan Abdulhamid takes Hechler to a room in the palace and shows a mortar there. Sultan Abdulhamid talks about Ottoman history and teaches Hechler a history lesson. Hunkar Abdulhamid says that he will do everything he has done so far again. Madame learns that the prisoners are released by Gulcemal in the laboratory and gets very angry. Bidar Sultan begins to be suspicious of Gulcemal. Hechler returns to the embassy building and is very angry with Abdulhamid. Sabahaddin asks Hechler to do something urgently. Sultan Abdulhamid tells that he will give Sinan a medal. Meanwhile, Zekiye Sultan comes back to the palace with Naime. Zekiye Sultan apologizes to her father for escaping from the palace and tells that Naime has saved her. Naime Sultan says that Marco has kidnapped Zekiye. Ottoman Coat of Arms (Tughra) and its Representation Adopted by Sultan Abdulhamid 2 | Each Element

In Payitaht Abdulhamid Episode 118, Madame locks Marco in a coffin and says she will punish him for his betrayal. Hunkar asks Ahmed Pasha to find and punish Marco. Zekiye Sultan apologizes to her father over and over again. Hunkar forgives Zekiye Sultan and Naime. Bidar Sultan tells the facts about Zishan’s death to Zekiye. Goldschmidt comes to the embassy and says he wants to kill everyone. Hechler says he hired a skilled assassin to kill Abdulhamid. Goldschmidt tells Diana that he will kill Abdulhamid after he leaves Hechler’s room. Halil Halid tells Hechler’s new plan to Hunkar. Hunkar makes a new plan and says he will use the Russian ambassador. Hechler considers using Zuluflu Ismail Pasha. Hunkar learns about Zuluflu Ismail Pasha’s situation and sends Ismail Hakki Bey to the hospital. Dilruba goes to speak to Madame and tells her about Gulcemal’s latest situation. Madame assigns Dilruba to prevent Gulcemal from speaking. Ismail Hakki Bey goes to the hospital and visits Zuluflu Pasha. Ismail Hakki Bey says that Hunkar wants to meet and talk to Zuluflu Pasha, but Zuluflu does not accept this meeting offer. Dilruba visits Gulcemal and tells her not to say anything about Madame or that Mehmet will die. Meanwhile, Bidar Sultan comes to Gulcemal’s room. Bidar Sultan asks Gulcemal questions, but Gulcemal does not say anything.

In Payitaht Abdulhamid Episode 118, Halil Halid starts to implement the plan they made with Hunkar. Ismail Hakki Bey returns to the palace and says that Zuluflu Pasha does not want to meet Hunkar. Hunkar says that Zuluflu Pasha wants to justify himself by believing in a lie. On the way to the harbor, Nadir Bey starts a fight on a street and stops Hechler’s car. Meanwhile, Halil Halid dresses up like the British ambassador and meets the assassin Felix at the port. Halil Halid and Felix go to a hotel to talk. Even though Hechler is late, he goes to the port and thinks Selim is the assassin from France. Selim and Hechler go to a hotel to discuss the assassination plan in detail. Halil Halid tells Felix that he wants the Russian ambassador to die. Felix agrees to kill the Russian ambassador with a bomb but says that he needs a written order from the British embassy. Selim and Hechler begin to talk about the assassination of Abdulhamid and Selim says he needs a written order. Hechler accepts Selim’s request and tells him that he will give him the written order. Shehzade Abdulkhadir and Goldschmidt meet at the school of a church and talk about the education of children. Hechler is happy with his plans and says he will visit Zuluflu Pasha in the hospital.

In Payitaht Abdulhamid Episode 118, Hunkar and Mahmud Pasha talk about the court of Zuluflu Pasha. Meanwhile, Ahmed Pasha comes and tells that Hechler will give several new documents to Zuluflu Pasha. Hunkar realizes that Hechler wants to use Zuluflu Pasha, but does not accept the postponement of the court. Hechler asks Goldschmidt to stall Halil Halid. Hechler prepares the written order requested by Selim and sends it to a mailbox. Halil Halid receives this document and wants to take a photo of Felix and Hechler. Hunkar talks to his family and asks for Abdulkhadir’s wedding preparations to begin. Hechler comes to the hospital and says he wants to visit Zuluflu Pasha, but Ahmed Pasha does not accept it. Thereupon, Hechler brings the journalists he brought with him to Ahmed Pasha and makes them ask about the situation of Zuluflu. Ahmed Pasha has to allow Hechler. Hechler enters Zuluflu’s room and gives him documents to use in court. Zuluflu Pasha reads these documents but rejects Hechler’s offer. Zuluflu Pasha tells that he is not a traitor and expels Hechler in his room. Zekiye Sultan receives a letter from her husband Ali and learns that he wants to meet her. Halil Halid comes to the palace and tells Hunkar about the developments he made. The next day, Felix goes out and observes the Russian ambassador. Soghutlu and Asaf follow Felix. Felix notices the Ottoman agents and runs away from them.

In Payitaht Abdulhamid Episode 118, Nadir Bey stops Diana and British agents and catches them. Hunkar and Ahmed Pasha talk about the situation of Zuluflu. Meanwhile, Tahsin Pasha comes and tells that other Pashas are disturbed by Zuluflu’s condition. Because of what Hechler did, Hunkar gets angry and orders the court to be held as soon as possible. Soghutlu talks to Tatar and tells that they should not release Diana. Goldschmidt tells Hechler what Selim is doing. Hechler says that Zuluflu Pasha will not work with them and wants to be a witness in the court. Karasu suddenly comes to Hechler’s room. Hechler begins to explain his plan to Karasu to kill Abdulhamid and shows Selim’s photo. Karasu does not look at the photos and tells that he will use the old janissaries’ grandchildren. Hechler tells Goldschmidt that he will kill the entire Ottoman dynasty with the men of Karasu. Karasu tells Hechler how to find the leader of this gang. Hechler says that everyone except Sabahaddin will die and he expels Karasu from his room. Karasu says that Sabahaddin and his family will live. Meanwhile, Karasu sees Selim’s photo. Hechler does not listen to Karasu and says he will kill everyone. Goldschmidt asks who Selim is, but Karasu lies. Halil Halid listens to all of these conversations and goes to the palace urgently.

In Payitaht Abdulhamid Episode 118, Bidar Sultan visits Gulcemal again and tells her that she can be a mother again. Gulcemal cannot understand why Bidar Sultan is good to her. Gulcemal remembers how Bidar raised her and says she does not deserve her compassion. Bidar Sultan says that if Gulcemal confesses the facts, she will be forgiven. Madame says that Naime knows Marco and that Marco will soon go from Istanbul. Halil Halid comes to the palace and tells Sultan Abdulhamid what Karasu has done. Hunkar thinks why Karasu is doing such a thing and orders the implementation of his plan immediately. Mahmud Pasha meets Sabahaddin and asks about Hechler’s documents. Sabahaddin says that he will learn the contents of the documents and goes. Hunkar is happy with Zuluflu Pasha’s decision and says he is waiting for news from Sabahaddin. Hechler prepares the documents to be presented to the court, but Sultan Abdulhamid calls him to the palace. Ahmed Pasha visits the agents and talks about Felix’s assassination. Halil Halid tells Ahmed Pasha about his plan with the details. Hechler comes to the palace and tells Hunkar that he must hand over the throne to the next Shehzade. Hunkar tells Hechler that he will be arrested and exiled. Hechler says he will be a witness in the court and leaves the palace.

In Payitaht Abdulhamid Episode 118, Sabahaddin and Frida enter Hechler’s room and look for documents to use in court. Hechler sees what Sabahaddin and Frida are doing, but does nothing. Hechler tells Goldschmidt that Sabahaddin and Frida have betrayed them. Hechler makes a plan and tells Sabahaddin that he will testify in court. Hechler talks about a revolution and shows a document to Sabahaddin. Hechler continues to explain why he did not allow this revolution and details of his plan. Frida does not believe in Hechler, but Hechler continues to speak and deceives them. Ahmed Pasha conveys to Hunkar what Hechler said. Hunkar learns that several Pashas prepared for revolution and immediately calls these Pashas to the palace. While Bidar Sultan is speaking to Naime, the news of Gulcemal’s condition comes. Halil Halid gets into the Russian ambassador’s car and tells him that the British will assassinate him.

In Payitaht Abdulhamid Episode 118, Russian ambassador agrees to do what Halil Halid said. The Russian ambassador acts in accordance with the plan and Ahmed Pasha catches the shoemaker. But Felix secretly made another plan and shoots at the Russian ambassador. When Shehzade Abdulkadir and Goldschmidt speak in the garden of the church school, there is an explosion and the children die. Bidar Sultan realizes that Gulcemal tried to commit suicide and asks why she did this. Gulcemal apologizes to Bidar and faints. Pashas come to the palace and Hunkar asks them to withdraw their accusations about Zuluflu Pasha. Meanwhile, Hechler comes and tells that he is ready for the court. Hunkar asks Tahsin Pasha to call the soldiers. Soldiers come and arrest Hechler. Hechler is surprised by this situation and says he has diplomatic immunity. Ahmed Pasha and the Russian ambassador come to the palace. Ahmed Pasha says that Hechler gave an order to kill the Russian ambassador. Hunkar says that Hechler will be brought to court and he has lost.

Without ads, permanent access to Payitaht Abdulhamid Season 4 Episode 119 and many more can be achieved by subscribing membership on Multipoint TV by Clicking below button.

Have you Enjoyed Episode 119?