In Payitaht Abdulhamid Episode 122, Abdulhamid prepares a seat to sleep in the mansion where he was exiled. Meanwhile, Abdulhamid’s servant comes and helps him. People on the streets protest the new government, saying that Crete should be part of Greece. Abdulhamid’s son talks to the soldiers at the door of the mansion. One of the soldiers tells this boy that if he calls his father a donkey, he will give him a stick. Abdulhamid’s younger son goes home crying. Later, Abdulhamid learns about this. THen the tv series returns to Abdulhamid’s past. Hunkar and Tahsin Pasha talk about the meeting in Thessaloniki and try to understand which Pasha attended this meeting. Sultan Abdulhamid says that Tahsin Pasha and Mahmud Pasha will establish a committee and question the Pashas who went to Thessaloniki. Hechler comes to Thessaloniki and talks to Karasu here. Karasu pretends to be surprised by what he learned from Hechler. Hechler says he will establish an intelligence network in Thessaloniki and asks for help from Karasu. Esref Aziz goes to his wife’s grave and prays. Esref Aziz finds a small cross in his wife’s grave. Aliye and Fatma organize a charity dinner for their deceased father, but during this meal, chaos ensues.

In Payitaht Abdulhamid Episode 122, Sultan Abdulhamid calls Grand vizier Ferid Pasha and orders him to speak to Isaac Fernandez. Meanwhile, Isaac goes to Payitaht, and Hechler finds him in his room on the train. Hechler says Sultan Abdulhamid will make an offer to buy Isaac’s factory, but Isaac should not accept the offer. Isaac Fernandez listens to Hechler but asks Hechler for cash so he doesn’t sell the railway company. Grand vizier Ferid Pasha calls Isaac to the palace and tells him that the Sultan wants to buy the railway factory. Ferid Pasha tells that he lost money due to Isaac’s failure and that this situation should improve as soon as possible. Isaac says he will consider Sultan Abdulhamid’s proposal and talk to his family. A postman named Mehmet Talat is fired from his gardener job as his side job. Ferid Pasha tells Hunkar that Isaac wants to consider selling his factory. Sultan Abdulhamid orders Isaac to come to the palace tomorrow. Mehmet Talat goes to Karasu’s hotel and wants to stay there for a while. Sultan Abdulhamid asks questions about what happened at the charity while having dinner with his family. After these questions, there is a little discussion, but Sultan Abdulhamid forgives everyone. The next day, all Pashas come to Hunkar’s room. Sultan Abdulhamid asks questions about what happened in Thessaloniki and says that an investigation will be conducted.

In Payitaht Abdulhamid Episode 122, The man Mika sent to Aqaba returns and tells him that his sister is dead. Mika says he is very sorry that his sister is a Muslim, and he learns what happened to Esref Aziz’s son. Esref Aziz takes his son to the hospital and asks the doctors questions. Tahsin Pasha gives an official working in the palace the murder file in Thessaloniki. The officer remembers talking to the deceased before and feels guilty. Tahsin Pasha and Mahmud Pasha question Zuluflu Pasha, Selim Pasha, and Ahmed Pasha respectively, but no one is guilty. Sultan Abdulhamid listens to all Pashas from the next room. The clerk at the palace Cevat writes something and puts what he wrote in an encrypted bag. Cevat unwittingly says that he is involved in a bad job and that he should talk to Hunkar Abdulhamid. Cevat tells his friend that if something bad happens to him, he should take this bag to Hunkar. An argument breaks out between Ahmed Pasha and Fatma Sultan and then Bidar Sultan joins their discussion. Sultan Abdulhamid tells Tahsin Pasha that he has examined Isaac’s companies, and Isaac has a one-year tax debt. Isaac enters Sultan Abdulhamid’s room and tells him he doesn’t want to sell his factory. Sultan Abdulhamid once again tells that he wants to take over the factory and gives Issac a short time to think.

In Payitaht Abdulhamid Episode 122, Shehzade Abdulkhadir comes to the Harem and says that Hunkar approves what Fatma has done. Hechler comes to Mika’s office and tells him that Artin, the engineer working at Isaac’s factory, must die. Mika accepts this mission. Engineer Artin and the workers go on strike at the factory. Sultan Abdulhamid realizes that Artin wanted to help the Ottoman state and sends his spies to protect him. Artin and one of the directors of the factory go to the Armenian House. The Armenian House says that Artin was wrong and that this strike should end immediately. Soghutlu, Nadir, and Asaf take action to protect the engineer. Fatma Sultan tries to buy a dagger that belonged to her father, but Ahmed Pasha has already bought it. Esref Aziz comes to Payitaht and tries to find the person who left the cross on his wife’s grave. Mehmet Talat takes an interview at the post office to get a promotion and gets the promotion thanks to a previously received tip.

In Payitaht Abdulhamid Episode 122, Esref Aziz goes to the Armenian House and learns that the person he was looking for was Artin. Esref Aziz finds Artin’s house, but other Ottoman agents are also watching Artin’s house. Tahsin Pasha brings a report about the places in Thessaloniki, and it turns out that Zuluflu Pasha was lying. Shehzade Abdulkhadir realizes that his mother has secretly followed him and is very angry with her. Mahmud Pasha says that Zuluflu is Murad’s brother and that he was not there when Cevat died. Sultan Abdulhamid makes a plan for the reunion of the masons, and it will be revealed whether Zuluflu is innocent or not. Esref Aziz enters Artin’s house, but Ottoman spies are around the house. Esref Aziz and the Ottoman agents fight. Esref Aziz goes to Artin and tells him that there are people who want to kill him. Mahmud Pasha goes to the other Pashas and talks about Isaac Fernandez’s tax debt. Esref Aziz takes Artin to a safe place and asks him questions about the agents in front of his home. Artin tells about everything that happened, and even the Armenian House, to Esref Aziz.

In Payitaht Abdulhamid Episode 122, Mika’s men lie to the workers to get them back to work. Sultan Abdulhamid announces that Issac Fernandez will come to the palace the next day and talks about the masons. Karasu goes to a post office to send a telegram and sees Mehmet Talat there. Mehmet Talat warns Karasu about the telegram he wrote. Karasu says he will take Mehmet Talat to the highest positions and goes. The Masons hold a secret meeting, and one of the Pashas tells about Isaac’s tax debt. Masons listen to Pasha. Isaac Fernandez comes to the palace and tells Tahsin Pasha that he has to sell the factory because of his tax debts. Hunkar Abdulhamid calls Fatma to his room and gifts her all of her father Murad’s belongings. Tahsin Pasha goes to Sultan Abdulhamid’s room and tells him that Isaac will sell the factory because of his tax debt. Hunkar realizes that another Pasha went to the secret Masonic meeting. Sultan Abdulhamid realizes that Zuluflu Pasha is innocent and goes to his room, but Zuluflu is not in the room. Meanwhile, Zuluflu Ismail Pasha goes to the address he said in Thessaloniki and checks there. While Esref Aziz searches for Artin, Ottoman spies catch him. As Isaac is about to sign the document required for the sale of the factory, Hechler comes to Sultan Abdulhamid’s after a long time. Hechler says Isaac Fernanzed has paid his tax debts. Isaac gives up selling the factory. Sultan Abdulhamid sends Hechler and Isaac, but then Hechler’s horse carriage explodes as he leaves the palace.

Without ads, permanent access to Payitaht Abdulhamid Episode 122 and many more can be achieved by subscribing membership on Multipoint TV by Clicking below button. 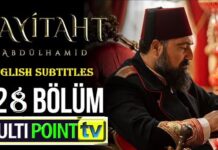 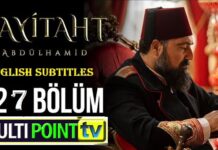 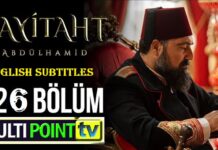 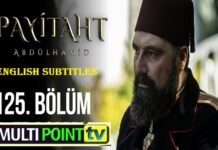 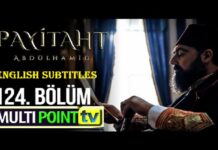 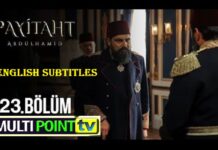 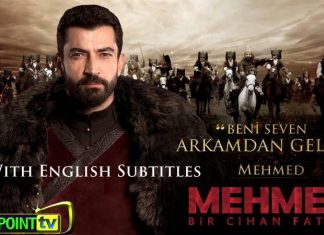