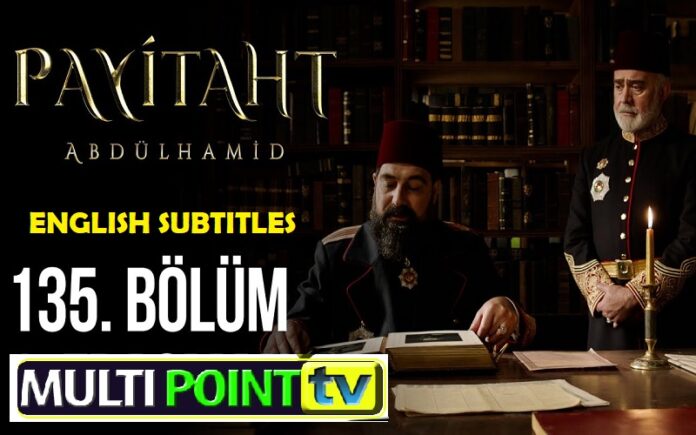 In Payitaht Abdulhamid Episode 135, Abdulhamid learns that Hechler is having a nervous breakdown and visits him. Hechler begs Hunkar not to die in fear. Abdulhamid says that he treated his enemies with compassion and that Hechler should leave the Ottoman lands. Hechler then leaves the palace. Saliha learns that Abdulhamid wants to have coffee with her from now on, and she is very happy. Naime cries and regrets that her father is angry with her. Aliye tries to comfort Naime and tells her that they need to make a new plan to send Saliha from the palace.

In Payitaht Abdulhamid Episode 135, Abdulhamid says that he will allow Russian ships in the Black Sea to pass through the Bosporus so that the Turks do not go to war. Grand Vizier Pasha opposes this situation and says that this situation is against international agreements. Tahsin says that a delegation came from Japan to examine the neutrality of the Bosporus. Mika makes a plan and wants to send Ali Osman abroad with Zakaryan. Hechler goes to the masons meeting in Thessaloniki. Hechler says that the masons were defeated and lost the British’s support. Selim sends a secret telegram to Pasha and tells him that he wants to be free now, but the mason Pasha tells that Selim should stay in the meeting. Aliye tells Stefano that she will send Saliha into a trap and send her from the palace. Abdulhamid accepts the delegation from Japan and allows them to do research. Hechler says that he knows Selim is coming to the meeting instead of the real mason Pasha and keeps it secret. Selim says Abdulhamid will allow Russian warships to pass through the Bosporus. Masons are very surprised by this decision. Hechler says he will reveal Russian ships that will pass through the Bosphorus and goes to Payitaht with some masons.

In Payitaht Abdulhamid Episode 135, Fatma sees Aliye talking to Stefano and warns Stefano sternly. Zakaryan lies to one of the children in the Armenian orphanage and gives him a gun to kill Esref. Krikor thinks that Esref killed his family and waits in the orphanage to kill him. When Fatma returns to the palace, she gets angry with Aliye and tells her that she should not see Stefano again, but Aliye says that she loves him. Karasu visits the Russian ambassador and tells him that the British had previously given the wireless telegram to Japan. Karasu says he will give them a wireless telegram to help the Russians. Fernandez comes to the palace and apologizes to Abdulhamid for working with Hechler. Fernandez wants to bring samples of wireless telegraph machines to Payitaht to apologize to Hunkar. Hechler holds a secret meeting with some masons at the British embassy. Karasu wants to give one of the wireless telegrams that will come to Payitaht to the Russian ambassador and thus reveal the weapons on the ship.

In Payitaht Abdulhamid Episode 135, While Esref searches for his son in the orphanage, Krikor tries to kill him. Esref wants to tell Krikor the truth, but he runs away. Karasu sends one of his wireless telegraphs to the Russian ship and gives a signal transmitter to the Russian ambassador. Aliye and Naime make a plan to slightly poison Saliha. Saliha eats poisonous desserts while preparing food to give to the poor in the kitchen of the palace. Ahmed Nuri tells Hunkar that Hechler is making secret plans. Abdulhamid orders Fernandez to come to the palace and gives Ahmed Nuri a map of the secret weapons buried in Anatolia. Esref starts looking for Krikor. Mahmud tells his sister that he is reading a book about ghosts, and he scares her.

In Payitaht Abdulhamid Episode 135, Ahmed Nuri tells Manyas that he suspects Hechler’s actions. That night, Karasu comes to the embassy and says that Hunkar summoned Fernandez to the palace. Hechler tries to stop Fernandez and wants to stall Abdulhamid. Manyas asks Hechler what is going on but cannot get a proper answer. After Ahmed Nuri leaves the embassy, ​​Hechler tells Manyas the real plan. Later, Manyas hurriedly leaves the British embassy and tells all the facts to Ahmed Nuri. Mahmud talks to a man and asks him to do something. Ahmed Nuri goes to the palace and tells Hunkar that Hechler wants to expose Russian warships. Saliha suddenly becomes ill. Naime brings the note coming to the palace to Saliha. Saliha realizes that she has to steal Hunkar’s seal in order not to die. Hechler uses the signal transmitter in his hand to tell the Russian ship to arrive at Karakoy port. Naime continues to lie to Saliha and tries to persuade her to steal the seal. Tahsin says they couldn’t find Fernandez.

In Payitaht Abdulhamid Episode 135, Hechler meets the committee from Japan and tells them that there are weapons on a Russian ship. Esref takes Krikor to a warehouse and shows the provisions Abdulhamid sent to the Armenian orphanage. The man Mahmud was talking to dresses up like a ghost and scares Sabuha. Naime thinks that Saliha will steal Hunkar’s seal and does not realize that she has taken a deadly poison. Krikor meets with Zakarian and tells him that he killed Esref. Hechler comes to the palace with the Japanese committee and asks Abdulhamid to search for the Russian ship. Abdulhamid gives them a search warrant and even says he will go to the port with them. Krikor takes Zakaryan to a deserted place, and Esref saves his son. While Naime and Aliye are waiting for Saliha to steal Hunkar’s seal, they see her in Abdulhamid’s room waiting for death. The Japanese committee searches for the Russian ship, but there are no weapons on the ship. Thereupon, Abdulhamid declares Hechler an unwanted man and once again asks him to leave the Ottoman lands.

Others who are searching for watching Payitaht Abdulhamid Episode 135 English Subtitles free of cost, they need not worry as we have brought the solution. You may watch Payitaht Abdulhamid Episode 135 English Subtitles here, but there will be some ads too. Keep visiting historicales.com for all the updates regarding the TV series and Historical knowledge. Please click below button.