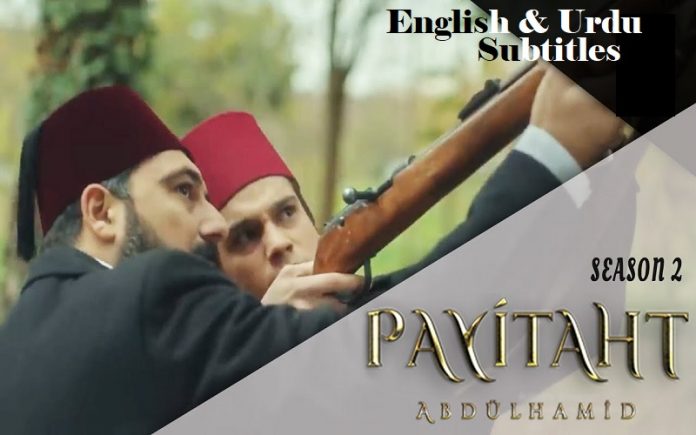 The second season starts with an Ottoman victory. The Ottoman state won the war against the Greeks. However, Naime Sultan and Hatice Sultan are worried that they cannot see Kemalettin among those who came from the war. Sultan Abdulhamid hosts Parvus in his palace. Murad and Soghutlu manage to bring the petrol map to the Payitaht, but they now have to capture agents in the Payitaht. Murad tries to decode the secret code in the books while Selim Pasha comes to the palace. Selim Pasha’s arrival bothers many people. Mahmud Pasha is looking for ways to return to the palace. Parvus tries to finish Abdulhamid by gathering new men. Firuzah awaits the opportunity to avenge her mother in the palace secretly. Mahmud Pasha’s plays put Selim Pasha and Seniha Sultan in trouble. Murad and Soghutlu find the agents in the Payitaht thanks to Ahsen (Melika). Meanwhile, Ahsen rejects Shehzade Abdulkhadir’s marriage proposal and realizes that she cannot stay in the palace any longer. Shehzade, who could not get the duty he wanted from his father, wants to leave the palace. Mahmud Pasha cooperates with Parvus to return to the palace.

Seniha Sultan and Sabahaddin, who helped Mahmud, find themselves in front of Abdulhamid. Murad and Soghutlu save Selim Pasha and his daughter Dilshad. Firuzah tries to make Shehzade Abdulkhadir fall in love with her to get revenge on Bidar Sultan. Abdulkhadir, who made a mistake because of Parvus, helped Herzl unintentionally. Parvus is nervous that Gerfand will tell Abdulhamid all the facts. Shehzade Abdulkhadir sold land to the Jews. The engineers that Abdulhamid called from abroad became the new target of Parvus. Mahmud eventually worked for the oil company. Sultan Abdulhamid assigned Murad to take Hazrat Usman’s sword from Topkapi Palace, but others tried to get it.

Those who took the sword poison Sultan Abdulhamid. The doctors do everything to save the Sultan, but a doctor that Karaso sent tries to apply the wrong treatment. Tahsin Pasha and Bidar Sultan hide this from everyone. Naime is very upset about Kemalettin’s approach with Hatice. Sultan Abdulhamid is almost dying, and Bidar Sultan takes a decision that no one expects. Meanwhile, America begins preparations for war and Parvus prepares Shehzade Abdulkhadir to take the throne. There is complete chaos in the palace and Bidar Sultan learns the true identity of Firuzah. Abdulhamid Khan wakes up and asks why his son sold the oil company and its shares to foreigners. Shehzade asks Mahmud Pasha for help to save himself. Sultan commissioned Murad to find the murderers who killed his uncle years ago. Hatice attempts suicide because her love letters to Kemalettin were passed into the hands of Bidar Sultan.

The arrest of Kemalettin Pasha upsets Naime Sultan. Herzl and Karaso come together and provoke the youth in Payitaht against Abdulhamid. Parvus plans to spread the news that Abdulhamid is poisoning hundreds of young people. Abdulhamid learns that cholera is the reason for the hospitalization of young people. Selim Pasha suffers from cholera. Sultan Abdulhamid brought Parvus’ family to Istanbul to reveal the true identity of Gerfand (Parvus). Muslims who pray in a mosque in Varna is killed and the Bulgarian gang is shown guilty, but it is Parvus who ordered the massacre. Thus, Parvus wants to report that the Ottoman Empire killed the Bulgarians to take revenge. Russia sends a delegation to investigate what happened and this will almost start a war. Bidar Sultan wants to the marriage of Tevfik Pasha and Firuzah because she will be able to get rid of him, but this situation bothers Shehzade Abdulkhadir. Sultan Abdulhamid sends Murad to capture Parvus because he knows his true identity now.

The capture of Parvus creates a great event. In cooperation with Herzl, Karaso, and Vladimir, there was an uprising in Istanbul. Abdulkhadir starts to search for the Firuzah after the chamber imprisonment is over. Mahmud Pasha risked his life for violating Vladimir and Herzl’s plan for merchants. Tahsin leaves Pasha village and sets out for Payitaht. The Sultan’s death sentence against Parvus put Tahsin Pasha’s life in danger. Firuzah lives in a miserable state, but Abdulkhadir finds her. With false documents and evidence, Sultan Abdulhamid is accused of genocide. Theodor Herzl wants the land of Jerusalem this time. Sultan Abdulhamid wants to establish a new army to strengthen the Ottoman Empire and therefore wants to establish a partnership with the German Emperor. Hatice is not happy with her marriage to Vasfi Pasha. Kemalettin forgets his pain and tries to make Naime happy. But Bidar Sultan is ready to do anything to protect her children. German Emperor Wilhelm is assassinated, but Murad saves him. Parvus makes a new plan and plans to portray the Ottoman as a Jewish murderer. Shehzade has decided to marry Firuzah, but Bidar Sultan and Naime try to change his decision.

Mahmud Pasha’s treachery has been proven and he has been arrested. Dilshad admired Herzl. Meanwhile, Firuzah begins to live in the palace, but she does not follow any rules. Hatice Sultan starts a fire in the mansion to reveal Firuzah’s real identity. Sultan Abdulhamid needs money to get shares from the oil and railway agreement. Murad suspects Dilshad and Dilshad realize it. Sultan learns what happened because of Shehzade and sends away his son from the palace. Parvus plans two assassinations against Abdulhamid. Bidar Sultan learns where her son is and goes to talk to him. Meanwhile, Parvus tells the public that Abdulhamid will take his wealth and go abroad. The public gets angry and wants to talk to Abdulhamid Khan.

The real face of the Firuzah is revealed. Ahsen accepts Murad’s marriage proposal. Seniha Sultan expels her husband Mahmud Pasha after she finds out about his betrayal. The soldiers of Parvus and Hussein Pasha are marching towards the palace. After the attack on the Harem, Abdulhamid becomes angry. Bidar Sultan learns the treachery of her uncle. As Murad tries to restore order in the streets, Parvus tries to kill him. Ahsen is shot instead of Murad and Murad shoots someone with a gun to get revenge. He is sentenced to death for the person he shot. After the executions of Murad and Hussein Pasha, Hunkar summons Fehim Pasha to the palace. Mahmud Pasha struggles to take on the task of the grand vizier.

Meyid talks to Abdulhamid about Parvus’ safe, because Vladimir gave the key to Meyid before he died. Fehim Pasha acts outside Hunkar’s orders to stop opium trade. Meanwhile, Gertrude Bell comes to Istanbul and asks Hunkar for permission to excavate the Ottoman territory. Gertrude Bell has a plan to finish Hunkar. According to this plan, for the advance of the Arab civilization, it must be independent of the Ottoman Empire. Gertrude Bell has already begun provoking the Arab tribes against Sultan Abdulhamid. Shehzade Mehmet Selim comes to the palace. While this situation pleased Abdulhamid, Abdulkhadir was disturbed. Gertrude Bell, Karaso, Sabahaddin, and Parvus take action. Abdulhamid is slowly ill due to the dust coming out of the chest given by Parvus. Meanwhile, Gertrude Bell and Parvus accelerate the revolution. The soldiers went out into the street and proceeded to the palace. Mahmud Pasha learns that his son Sabahaddin is a traitor. As the army advances, Mahmud Pasha wants to stop them. As Meyid and Fehim Pasha move towards the palace, Parvus traps them.

Parvus starts to gather the masons living in Istanbul. Two of the Abdulhamid pashas are among these masons. Sultan Abdulhamid realizes this situation and secretly tests all of the pashas. Fehim Pasha was very impressed by Irena but knows nothing about her. Parvus tries to wage a war between Iran and the Ottoman Empire. Fehim Pasha takes action to close all casinos in Payitaht. Abdulhamid raids the mason meeting with his soldiers. Tevfik Pasha turns out to be a mason. Abdulhamid forgives him on one condition that he assist in the plan to escape Parvus. Bidar Sultan leaves the palace, but what will happen to her will leave Sultan Abdulhamid desperate.

Without Ads permanent access to watch Payitaht Abdulhamid Season 2 with English & Urdu Subtitles can be achieved by subscribing membership by clicking blue button.

But who can’t subscribe and searching for watching Payitaht Abdulhamid Season 2 with English Subtitles free of cost, they should click below green button.

But who can’t subscribe and searching for watching Payitaht Abdulhamid Season 2 with Urdu Subtitles free of cost, they should click below green button.