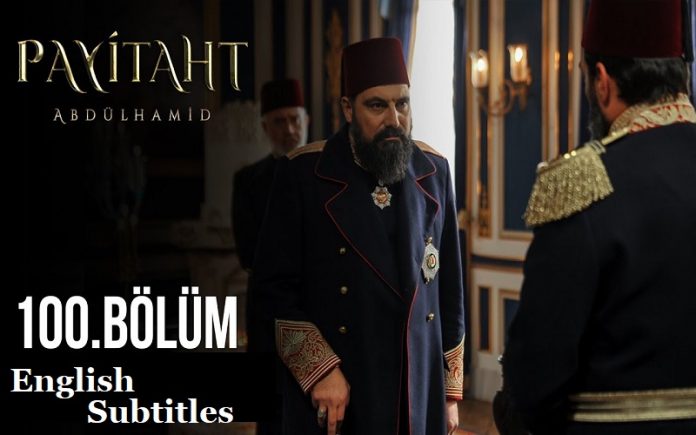 In Payitaht Abdulhamid Season 4 episode 99, Abdulhamid comes to the hospital to visit Selim Pasha. Selim Pasha opens his eyes and secretly pulls out his gun and shoots Gustav Efendi in the shoulder, then he faints. Madame makes a new plan to receive the holy relics. Hunkar returns to the palace and learns about Selim Pasha and Gustav Efendi. Meanwhile, Gustav Efendi’s children arrive. The Prince and his men talk about what to do and decide that they should do something big. They will kidnap the three members who are in prison to decide at the committee meeting. Halil Halid asks for his duty to take part in the committee. Hunkar tells Vladimir and Grun about what happened to Gustav Efendi. Grun tells Hunkar the letter his mother left him and tells him about his anxiety. Hunkar says they will be guests at the palace for a while. Halil Halid sends a telegram describing the decisions taken on behalf of IMRO and the abduction plan to the palace. Hunkar transfers prisoners to the Payitaht to avoid conflict because Halil Halid can kidnap them on the road.

Hunkar thinks that Selim Pasha is always loyal. To find the enemy, he will send a telegram while Gustav Efendi is in the hospital. Tatar Bey comes to other agents and tells what happened to Soghutlu. Tahsin Pasha goes to the hospital and learns about the patients. Then he tells the doctor about stomach pain. Hunkar sends a telegram instead of Zuluflu Pasha and waits for an answer. At the last moment, a reply message appears. The doctor says that after examining Tahsin Pasha, his illness may be tuberculosis. Mehmet goes to the palace garden to see Gulcemal and says that he wants to stay alone for a while and think. After Vladimir and Grun leave the palace, they go to their father’s office, where they see Sabahaddin Efendi. Sabahaddin Efendi tells them that he has sent a telegram and they talk about it.

İn the proceeding of Payitaht Abdulhamid Season 4 episode 99, Tahsin Pasha calls Ismail Hakki and informs him of his illness and asks him to stand next to Hunkar if something happens to him. Sabahaddin Efendi goes to see Karasu and informs him about the latest events. Karasu wants to take care of his company but Sabahaddin persuades him to enter the game. Hunkar summons the Pashas and receives information about Rumelia. Mahmud Pasha tells Hunkar about the future of an American arms dealer. Cemile Sultan receives a letter from her husband and says that her husband needs a lot of money. Gulcemal goes to see Madame and Madame gives him a poison to poison Mehmet’s horse, so they plan to kill him. Mahmud Pasha and Zuluflu Pasha hold a meeting for the purchase of weapons, and American arms dealer Mr. Ezra and Emanuel Karasu come to this meeting. Pashas tell them that they want to buy weapons and machines that can produce weapons. The American arms dealer says he will sell weapons, but he should ask his government to sell the machines that produce weapons, and he goes.

Mahmud Pasha and Zuluflu Pasha come to see Hunkar and inform Hunkar about the purchase of weapons. Halil Halid secretly kidnaps the members of the organization and brings them to Ziya Sami. Members of the organization do not want to talk to the Prince and ask for a written agreement to join the committee. Gustav Efendi opens his eyes and tells Vladimir what to do. Sabahaddin and Karasu come to Gustav Efendi’s office and see Vladimir taking a bottle of essence. A mailman then brings a letter from Esther. The letter states that Esther’s body will be found on the Kumkapi coast. Hunkar learns that Selim Pasha has started to recover and asks him to be transferred to the palace. Tatar Salih and his men seize the IMRO’s storage and capture three men who were just kidnapped from prison. Vladimir enters Selim Pasha’s room and tells him the secret password as he gives the essence. Selim Pasha comes to the palace and Hunkar visits him. Hunkar asks him what was going on in his head and why he shot Gustav. Selim Pasha says that Gustav is a traitor and the organization gave the shooting call. Selim Pasha passes out while talking about orders. Halil Halid goes to see Tatar Bey and his former men. Halil Halid says he wants to take the kidnapped prisoners and that everything is a plan.

In the nest scene of Payitaht Abdulhamid Season 4 episode 99, Tahsin Pasha receives a message about a corpse found in a hotel room. This body belongs to the American arms dealer, Mr. Ezra. Ahmed Pasha goes to the scene where he sees the British Ambassador and then they go inside together. Ahmed Pasha examines the body and secretly takes a note from the body’s pocket. Cemile Sultan gets rid off his bodyguards and goes to meet with his husband in a secret place, but the bandits stop her car on the way. The bandits take all the money from the Sultan. Ahmed Pasha says that Ezra’s death is not suicide and gives the note to Hunkar. Halil Halid takes the kidnapped prisoners and starts to wait in the forest. Meanwhile, Tatar Bey and his men follow them. Ziya Sami and his men come. One of the kidnapped prisoners says he has given up and leaves. The British ambassador comes to see Hunkar and asks about the murder. Hunkar says this murder was planned to harm the Ottoman Empire. Meanwhile, Tahsin Pasha tells Hunkar that a woman’s body was found on the Kumkapi coast. It turns out that those who stole Cemile Sultan’s money were Madame’s men. Cemile Sultan comes to the palace and gives her jewels to Dilruba to sell them to jeweler tomorrow. Ahmed Celaleddin Pasha goes to the beach and finds Esther’s body.

While Zuluflu Pasha and Ismail Hakkı Bey were waiting in the telegraph room, they received a message and it was about the gang inside the state. Bidar Sultan wants to talk to Mehmet. Mehmet hides the truth about Gulcemal. Ahmed Pasha tells Hunkar that the body that hit the shore belongs to Esther. Vladimir and Sabahaddin will blame someone as the leader of the gang within the state. The place and time of the committee meeting to be held will be determined in the Prince’s palace. Tatar Bey and his men receive information from the palace about the IMRO committee meeting. Naib Efendi tells Halil Halid that the meeting place has changed and tells him to bring the phonograph to the meeting. Ahmed Pasha goes to the post office where Selim Pasha said and he finds new orders. The new order states that Gustav Efendi’s sons Vladimir and Grun will be killed. Meanwhile, Zuluflu Pasha receives a new telegram. Anna comes to the palace and sees Bidar Sultan. She says that she is very sorry that Cemile Sultan’s money was stolen.

At the end of Payitaht Abdulhamid Season 4 episode 99, Halil Halid puts drugs in Naib Efendi’s food and puts him to sleep. Zuluflu tells Hunkar where the gang leader will go that night. Cemile Sultan goes to the park to meet with her husband, but a man is waiting for her and he gives Cemile Sultan a letter from her husband. Cemile Sultan gives all the money to the man. Tatar Bey and his men go to the meeting place chosen as a trap, but the gang members outnumber them. Halil Halid comes at the last moment and rescues them. Gustav Efendi comes to the palace at Hunkar’s request. Bidar Sultan goes to Cemile Sultan to talk about what happened. Abdulkhadir believes that Dilruba is the one who wrote the letters. The committee decided to bomb a Khanqah. Halil Halid urges the palace to send a telegram and asks for the bombing of his place as soon as possible. Madame comes to the palace and wears Cemile Sultan’s brooch. Bidar Sultan sees this and asks Cemile Sultan about this. Mehmet takes his horse from the barn and goes for a walk, but at the same time, Meziyet gives Gulcemal the gift that Mehmet sends. A ring and a note appear inside the gift box. Gulcemal understands that Mehmet still wants to marry her and she runs to the barn, but Mehmet is already on his way. Tahsin Pasha brings Hunkar new information he has found. Ottoman soldiers prepare the cannons for fire and shoot the place where Halil Halid is located. Hunkar begins to observe the gang leader’s arrival, but when he sees that it is Mahmud Pasha, Tahsin Pasha faints and falls to the ground. What is Mahmud Pasha doing in there? Did Halil Halid die? What will happen to Tahsin Pasha?

Without ads, permanent access to Payitaht Abdulhamid Season 4 Episode 100 and many more can be achieved by subscribing membership on Multipoint TV by Clicking below button.

Real history of all Characters in Payitaht Abdulhamid Season