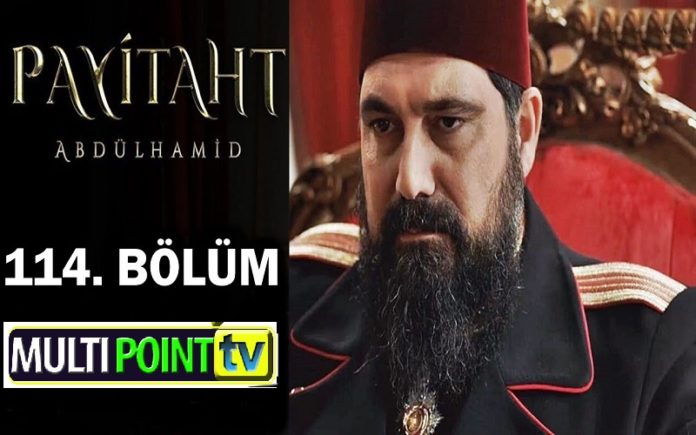 In Payitaht Abdulhamid Episode 113, Sultan Abdulhamid calls Pashas and talks to them. Hunkar tells what the Ottoman did before and what they will now do for the Baghdad railway. Hunkar wants to stop the British trade on the Suez Canal by Baghdad railway. Hunkar will use the Gulf of Aqaba against the British. Tevfik Pasha warns Hunkar and says that the British can attack. Hunkar gets angry with him and tells that it’s time to get up. Hechler comes to the embassy and tries to understand how Sultan Abdulhamid got the maps. Robert and Goldschmidt blame the Brain. Hunkar thanked Halil Halid Bey for bringing the maps and gives him a new task. Halil Halid’s new task is to get Robert out of the British because Hunkar says that Robert cannot give any more information and his life is in danger. Halil Halid will show Robert dead, so the British will stop following Robert. Hechler wants to kill the Brain, but he needs permission from London for that. Hechler thinks that Robert may also be a traitor. Halil Halid tells the new plan to other agents. Hechler talks to Brain and Robert. Hechler gives a German company name to Brain and asks him to buy its shares. Then Hechler calls Robert and tells him the name of another German company. According to Hechler’s plan, whichever company Hunkar buys shares will reveal from whom he has received information. Bidar Sultan and Zekiye Sultan talk about the letter to Naime.

In Payitaht Abdulhamid Episode 113, The bandits take Madame Blavatsky and take her somewhere. Mahmud Pasha suggests establishing another telegram station in Antalya. Since Aqaba is an Ottoman land, Hunkar decides to build this station. Robert leaves the embassy, ​​but Diana follows him. As Madame Blavatsky tries to figure out where she is, Hechler comes and starts talking to her. Hechler says he saved Madame, but Madame does not understand it. Hechler says that everything is a trap of Abdulhamid and the Ark of the Covenant is not under the Yildiz Palace. Later, Hechler tells that he will finish Abdulhamid and the Ottoman Empire and asks Madame to help. Soghutlu stops Diana on the street and starts talking to her. So Robert escapes from Diana. Robert comes to his house and Halil Halid arrives when he is about to send a telegram to the palace. Robert tells Hechler’s plan. Later, Halil Halid tells Robert what Hunkar has done and what he has ordered. Ahmed Pasha tells Hunkar the message that came to the palace. Hunkar orders the company’s shares to be purchased and spoken to the Brain. Hechler calls Frida and says he wants to meet her connection with the palace. Frida says she will talk to Pasha and goes.

In Payitaht Abdulhamid Episode 113, Frida goes to Zuluflu Pasha and tells him what Hechler wants. Zuluuflu accepts this introductory offer. Goldschmidt tells Hechler that Robert is a traitor. Hechler doesn’t want to kill Robert because he is considering using him. Meanwhile, Robert gives Diana theater tickets to make peace with her. Halil Halid comes to Hunkar and tells his plans in detail. Bidar Sultan calls Meziyet and says a police chief wants to marry her. Meziyet is surprised but accepts Sultan’s request. Frida, Zuluflu, and Hechler meet. Zuluflu Pasha tells Hechler about the new moves that Sultan Abdulhamid will make. Hechler understands that Hunkar Abdulhamid will hurt British trade. He says that Aqaba is Ottoman land according to the old agreements. Hechler wants to get these old deals. Madame Blavatsky comes back to the Society and tells that everything is a game of Abdulhamid. Zekiye Sultan begins to think that her husband is in Payitaht. Hechler talks to Robert and says he knows everything. Robert tries to deny the situation, but Hechler threatens him to kill Linda. To save Linda, Robert agrees to put the old agreements in the palace into Mahmud Pasha’s bag. Ahmed Pasha and Selim start following Mr. Brain, but Selim loses control and attacks him. Ahmed Pasha says that the British will kill Brain. Mr. Brain doesn’t believe in Ahmed Pasha first but goes to the embassy to investigate this issue.

In Payitaht Abdulhamid Episode 113, Hechler comes to the palace and tells Hunkar that he knows everything about Aqaba. Hunkar realizes that someone is a traitor and gets very angry. Kemalettin sends Zekiye Sultan a message about Naime. Robert tells Diana about his fake death plan and they go to the theater together. Everything goes according to the plan, and the carriage explodes. Zekiye Sultan tells Bidar Sultan the message she received from Kemalettin, but Naime listens secretly to their speech. Bidar Sultan wants to hide this message. When Hunkar thinks which Pasha is a traitor, Halil Halid and Robert come. Meziyet comes to Shehzade Abdulkhadir and gives him a notebook. This notebook is filled with what Meziyet wrote about Shehzade. Shehzade Abdulkhadir asks what’s going on and Meziyet says she will go from the palace to get married. Hunkar calls Pashas and talks to them. Hunkar asks if the actions of the state are sufficient for them and tells that he will not talk about the state issues with the Pashas. Hunkar orders Tahsin Pasha to call Grand Vizier Ferid Pasha. Robert secretly enters Hunkar’s room and gets the old deals. He then puts these agreements into Mahmud Pasha’s bag. Mr. Brain examines the confidential documents in the embassy and realizes that he will die.

In Payitaht Abdulhamid Episode 113, Hunkar opens the chest sent by Bidar Sultan and reads the letters in it. Mahmud Pasha unwittingly brings the old deals into his house, and Frida sneaks them. The next day, Frida gives deals to Hechler. Frida asks her father and Sabahaddin to be recalled. Goldschmidt says that London allowed Mr. Brain to die, but Hechler said he was innocent and no longer needed to die. Brain talks to Ahmed Pasha and Selim and says he will work for the Ottomans. Hechler comes back to the palace and says that the British will react very harshly about Aqaba. Hunkar says Aqaba is Ottoman land, but Hechler says Aqaba is Egyptian land. Tahsin Pasha says that the agreements are not in the room. Hechler says the deals are in him. Bidar Sultan says that she has no hope anymore and that she will accept every decision Zekiye Sultan makes. Hunkar will personally manage the operation to withdraw deals.

In Payitaht Abdulhamid Episode 113, Pashas talk to find the traitor between them. Zuluflu Pasha plans to portray Mahmud Pasha as a traitor. Hechler learns that the Ottomans are continuing to work on Aqaba and asks London to give a warning to Ottoman. Zuluflu Pasha comes to the room of Hunkar and says that he wants to talk to him alone. Zuluflu Pasha says that Mahmud Pasha is leaking news from the palace. He wants to set up a game to test the reliability of Mahmud Pasha, and Hunkar allows it. Mr. Brain goes to a tailor shop and starts waiting. Ahmed Pasha and Selim come to this shop. Ahmed Pasha asks the old agreement from the British from Brain. Mr. Brain says he can do it, but then he must be removed from the embassy. Zuluflu Pasha calls Frida and tells her that she must take a document from Mahmud Pasha’s bag and give it to Hechler. Frida agrees to make Mahmud Pasha appear traitor. Naime and Gulcemal go to the Society and ask questions about the soup kitchen. Madame Blavatsky orders Gulcemal to buy all the shops around Al-Aqsa Mosque. Gulcemal objects to this task, but she has no choice but to accept it.

In Payitaht Abdulhamid Episode 113, While working at Hunkar carpentry, Hechler comes and tells that London warned the Ottomans about Aqaba. Hunkar puts the note brought by Hechler under one of the table’s legs. Hunkar sends a large military unit to Aqaba and begins preparations for war. Hunkar calls Mahmud Pasha and gives secret documents about the railway to Mahmud Pasha. Hechler learns that the other copy of the deal comes from London and prepares to get the deal from the port. Hechler orders Mr. Brain to die. Frida gives food to Mahmud Pasha and takes secret documents from his room. Halil Halid and agents try to save Brain, but Goldschmidt stops them. Frida goes to the British embassy with secret documents. Halil Halid rescues Brain and Hunkar orders to send him to a secret place.

In Payitaht Abdulhamid Episode 113, Hechler once again comes to the palace and talks about the confidential documents he received from Mahmud Pasha. Hunkar says he will fight the British while he is alive and sends Hechler. Frida tells that the soldiers have arrived at the mansion and that Mahmud will be arrested. Frida says that Sabahaddin sent her and Mahmud Pasha should believe her. Frida sneaks out Mahmud Pasha. Goldschmidt says he hires Armenian shooters and will kill all Ottoman agents. Diana says that Hunkar is calling Hechler. Meanwhile, Hunkar goes to Bidar Sultan and forgives her. Halil Halid and the agents make their preparations at the port and start waiting for the ship. There is a conflict at the port. Namik takes the hostage on board. Hechler says he has captured a copy of the agreement. But Hunkar objects to him and says that the Ottoman agent on board has already brought the deal.

Without ads, permanent access to Payitaht Abdulhamid Season 4 Episode 114 and many more can be achieved by subscribing membership on Multipoint TV by Clicking below button.

Have you Enjoyed Episode 114?