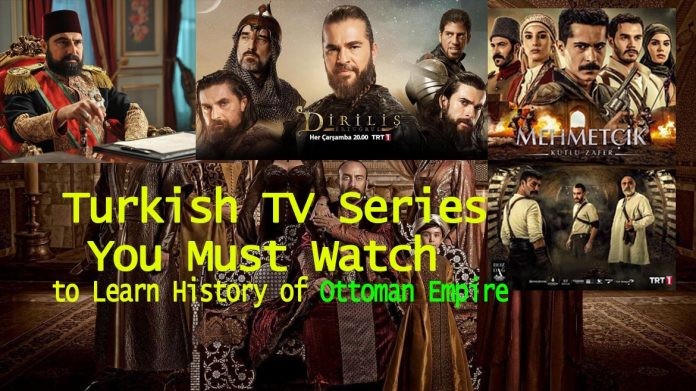 Today we are going to tell you the top 6 TV Shows which are based on the history of Ottoman Empire. If you are not interested in Ottoman History, you should quit reading immediately. However, it is according to your taste and interest then it is the best article for you and at the end, you will admire such an informative article. We also tell you where you can watch these Seasons/TV Shows free of cost and without Ads.

This is the most famous TV Show in Turkey and the entire world. Dirilis Ertugrul TV Show is translated in more than 10 languages up till now. This is on-aired in 2014 on TRT1 Turkish Channel and remained to continue for 5 years and ended in 2019 on its 150th Episode. The Producer and Writer is Mehmet Bozdag. Engin Altan Duzyatan (Turkish actor) is playing a leading role in this series. It is shot in Riva, a village in Beykoz in Turkey on December 10, 2014. In the 13th century, the historical-based show of the Muslim Oghuz Turks took place. It revolves around a Kayi tribe, the life of Ertugrul, the father of Osman I, who was the founder of the Ottoman Empire. In response to the Mongols attacks, Turk tribe decided to migrate from central Asia to another place.They settled in Anatolia with two thousand large nomad tents. After facing many difficulties in famine they decided to migrate from Anatolia to a batter place where they can start a new life. Suleyman Shah the father of Ertugrul was the leader of the Kayi tribe. Suleyman Shah has four sons, Gundogdu, Sungurtekin, Ertugrul and the Youngest one is Dundar. Sungurtekin was caught by the Mongols so Kayi tribe considered him dead. Hayme Hatun’s mother of Ertugrul didn’t believe it. His two sons Gundogdu and Ertugrul were honest and they took part in tribal issues. Dundar was younger so he was not able to encounter such warrior issues. If you have not watched this amazing series then you must watch it first of all to know how Ertugrul fight with templars and Mongols and put a foundation of the Ottoman Empire in Sogut. Click here to watch free of ads or click here to watch for free

Mehmetic kutulamare is a great historical series about the Ottoman Empire. The series plot includes the events during World War 1. This series is directed by the same producer as Dirilis Ertugrul, Mehmet Bozdag. There is a group of people, Mehmet and his friends who have prepared to resurrect the Ottoman state. This group of friends devoted his life for the love of his motherland. Mehmet does not hesitate to show any kind of sacrifice and effort for the homeland. For this purpose, he participates in Osmancik Battalion, where Suleyman Military Bey is located and the most capable soldiers are selected, and shows a great struggle to go to the front. Mehmet being patriotic, became part of the ottoman battalion under military bey, Suleyman. The story of the Mehmetic series centered about the efforts of Mehmetic and his friends and provide strong resistance to the British Indian army. There is another character Zainab, who fell in love with Mehmet. Everyone must watch this series as it provides a great historical event, how soldiers of the ottoman empire fought heartedly with the British Indian army. Click here to watch the series with English subtitle

This is about the History of Great Sultan Suleyman. He is known as Magnificient Sultan because his reign was longest among all sultans of the Ottoman Empire. He also expanded to empire to three continents and conquered many areas. The story start from his dream to build a greater Empire than Empire of Alexander the Great. Keeping this dream, he ruled and conquered many areas. Hurrem Sultan was the wife of Sultan Suleyman. The Magnificent Century Serial also shows the love story of Suleyman for his wife. This Serial was available on Netflix but now it’s not available. Some episodes are available on youtube also

Kosem Sultan was considered as the most powerful woman in the history of the Ottoman Empire. She influenced the politics of the Ottoman Empire when she became the wife of Ottoman Sultan Ahmed I. Kosem Sultan lived the life of reign of 6 Sultans. he lived during the reigns of Ibrahim,  Ahmed I, Mehmed IV, Murad IV, Mustafa I, and Osman II. After his death, she was considered called as martyred women, murdered women and Magnificient mother. The storyline started when he was brought as a slave and then she became muslim and changed his name to kosem sultan. This is also called the start of the decline of Ottoman Empire from his roots. This is also available on Netflix with English Subtitles.

6. Mehmed: The Conqueror with English Subtitle

This serial started in 2018 and gained much attention. This is the story of Mehmed II who conquered Constantinople and expanded the Empire towards Europe. Many sultans tried a lot of times to conquer the Constantinople, but could not succeed. Sultan Mehmed II besieged Constantinople for 53 days and finally used a trick to conquer it. The TV Series stopped due to some historical facts and costumes of actors conflicted with history so they have to stop it and only Season 1 is available with English Subtitle, we will upload and share a link to watch it for free, keep visiting this page.