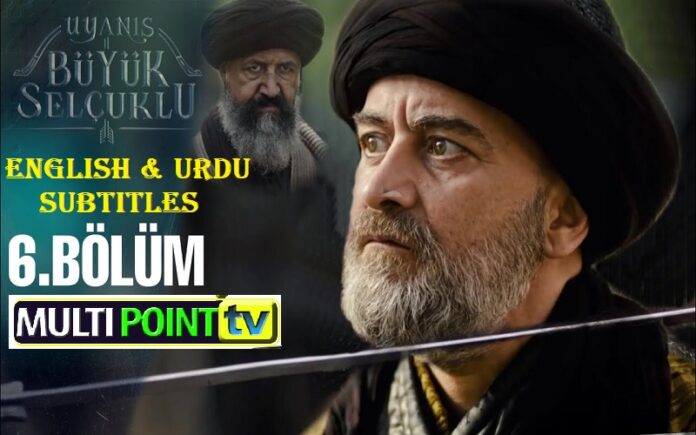 In Uyanis Buyuk Selcuklu Episode 6, When Tapar sees Sanjar’s face, he remembers that he was the hero who saved his father and raises his sword to kill him. Just as Tapar is about to kill Sanjar, Melik Shah comes and rescues Sanjar. Terken Sultan takes her newborn son in her arms and asks the doctors why her baby isn’t crying. The doctor says the baby is dead, but Terken Sultan does not accept it. Sanjar tells about what the Fatimids did and the secret organization to Melik Shah. Sanjar says that he should stay in this secret organization for a while and asks for the relics. The wounded soldier remembers Hassan who just came to the Seljuk palace and calls him a traitor before he fainted. Melik Shah does not want to allow the relics to be taken away but listens to Nizam al Mulk’s plan. Melik Shah agrees to give the relics and puts all responsibility for this plan to Sanjar. As Sanjar is about to set off, Melik Shah walks and stabs an arrow on Sanjar’s shoulder. Hassan Sabbah takes action to kill the injured soldier who arrives at the palace as soon as possible. Hassan Sabbah sneaks into the wounded soldier’s room and chokes him to death. Sanjar meets with Behram in the forest with the sacred relics he received.

In Uyanis Buyuk Selcuklu Episode 6, Later, Sultan Melik Shah returns to the palace and Seferiye tells him that Terken Sultan’s baby is dead. Melik Shah goes to Terken Sultan’s room and tries to calm her down. Melik Shah takes the body of his dead son and takes it to the grave. Nizam and Tapar go to the room of the killed wounded soldier and talk to the doctor. Nizam and Tapar think about who killed the Seljuk soldiers. Arslantas intervenes in Sanjar’s wound and they talk about Behram together. Nizam tells Melik Shah about the wounded soldiers who came to the palace and the secret soldiers who were killed. Melik Shah thinks Commander Andreas did this attack and says he will give him a heavy response. Andreas is very happy after the last attack and new soldiers from Byzantium give him confidence. Sultan Melik Shah visits the family of the deceased soldier and says that he will take care of them. Terken Sultan blames Elcin for her baby, who died in death, and starts looking for the paper she lost. Elcin is looking for her will in his room. When Elcin cannot find the will, she realizes that Terken Sultan has taken it and prepares to go to the accident area. Although Sanjar’s wound has not healed yet, he goes to the city and sends news to the grand vizier Nizam. Fatimids leader and Hassan talk about the capture of the relics.

In Uyanis Buyuk Selcuklu Episode 6, The leader of the Fatimids does not care about his dead soldiers because he plans to use the soldiers who have just arrived at the Byzantine castle. Hassan Sabbah schemes for the relics to be transported secretly. The soldiers that Tajul Mulk sent to the accident area search for hours and find the will that Terken Sultan lost, but then Elcin arrives. Elcin kills the soldiers and retrieves her will. Elcin realizes the seriousness of the situation and takes action to save her brother as soon as possible. After Sanjar faints at the marketplace, Turna rescues and cures him. Sanjar tells Turna that he works for the state. The leader of the Fatimids calls the scholar who argued with Ghazali and kills him for losing the argument. Melik Shah comes to the palace and revisits his conquest plans. Melik Shah slows down preparations for the Anatolian attack to move against the Fatimids and calls Hassan Sabbah to find the traitor among them. Abul Qasim and Hassan talk about the latest situation in Anatolia. Qasim asks Hassan for help in marrying the Sultan’s daughter. Terken Sultan learns that the men who went to seek the will was killed and realizes that Elcin did it. Melik Shah calls Hassan and asks him what he was doing in Kuvel Castle. Hassan realizes that Melik Shah is angry and tells him the soldiers who came to Kuvel, which he learned from the leader of the Fatimids.

In Uyanis Buyuk Selcuklu Episode 6, Terken arrives while Elcin and Seferiye are talking about Terken. Terken Sultan plans to show everyone that Elcin is a traitor. Arslantas shows the chests they prepared to Sanjar and Sanjar hides in one of these chests. Tapar and Seljuk soldiers attack the new Byzantine soldiers who come to Kuvel Castle. The Turks win the long war. Melik Shah kills the Byzantine commander. Sanjar reaches the secret place inside the chest. Dai Attas comes and takes the relics. Sanjar listens secretly to how Dai will attack the Seljuks. Attas and Hassan Sabbah say Kuvel should be even stronger, and they plot about Ilteber.

In Uyanis Buyuk Selcuklu Episode 6, Sanjar finally sneaks out of the big box and tries to figure out where he is. Hassan Sabbah says that Byzantine soldiers and swords cannot go to Kuvel. Attas understands and appreciates Hassan’s decision. Hassan tells what he learned about Ghazali and how dangerous he is. The leader of the Fatimids realizes that Ghazali is far more dangerous than he thinks and wants to kill him as soon as possible. Behram tells Dai that he suspects Sanjar. The leader of the Fatimids listens to Behram and wants to put Sanjar to a tough test. Meanwhile, Sanjar tries to find his way out of the Fatimids’ secret building. Tajul Mulk tells Terken that Qasim wanted to marry a woman of the dynasty. Terken Sultan is surprised to hear that Qasim wants to marry Mahmelek. Sanjar finally emerges from the secret place, but a group of soldiers attacks him. Sanjar’s spy friends arrive at the last minute and save him. Sanjar sets out to return to the city as soon as possible and tells his friends to inform Nizam. Commander Andreas learns that Ilteber is angry with Melik Shah and takes action to draw him to their side. Meanwhile, a Byzantine soldier comes and says that all the soldiers from Constantinople were killed. Andreas is very angry and says he will take revenge.

In Uyanis Buyuk Selcuklu Episode 6, Melik Shah realizes that the Byzantine empire can do something in the Mediterranean Sea and sends an order to his brother to protect the Mediterranean. Later, Melik Shah writes a letter to the Byzantine emperor and warns him sternly. Terken Sultan calls Qasim and gives him permission to marry. Sultan Melik Shah calls Hassan and tells him that the information he has given is correct. Nizam comes to Melik Shah’s room with important information. With the information Nizam received from Sanjar, he tells Melik Shah where the sacred relics and traitors are. Melik Shah says that they will do anything to bring the Fatimids to an end. Nizam says that they should support some scholars in order to eliminate Fatimids’ toxic ideas and mentions Ghazali. Melik Shah wants to meet Ghazali and sets out to see him. Behram summons Sanjar and gives him the task to kill Ghazali. Later, Behram says that if Sanjar succeeds in this mission, he will introduce him to Dai. Sanjar is taken to a cell to prepare for this mission. Melik Shah meets Ghazali and has a long conversation with him. Sanjar and Arslantas argue about the new mission. Sanjar says they have to inform Nizam al Mulk. The envoy sent by Andreas visits Ilteber and says they want to do business.

In Uyanis Buyuk Selcuklu Episode 6, Sanjar finds the waterline behind the wall and secretly sends a message from there. Andreas’ envoy says he wants to make a friendship pact and Byzantium will always support Ilteber. Ilteber asks her daughter Turna’s opinion. Although Ilteber is connected to the Seljuks, he says that there is no harm in making a friendship agreement with Byzantium and signs the agreement brought by the ambassador. Turna goes to a secret place to meet Sanjar and begins to wait for him. Behram summons Sanjar and gives him a bow to kill Ghazali. Sanjar says he will kill Ghazali and sets off with the two men. During the dinner, Emir Qasim says that his soldiers will always support Melik Shah and he wants to get stronger to establish unity in Anatolia. Qasim tells the Sultan that he wants to marry someone from the dynasty in order to control the Turks in Anatolia. Sanjar sneaks to the madrasa and begins to wait to kill Ghazali. Melik Shah asks Qasim who he wants to marry. Upon this, Qasim tells the Sultan that he wants to marry Elcin. Nizam and Ghazali go out to talk. After the conversation between them is over, Sanjar shoots Ghazali with an arrow. 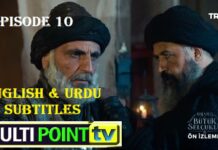 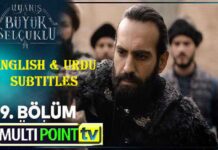 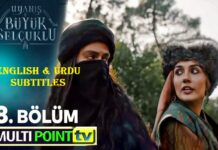 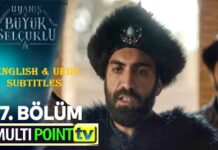 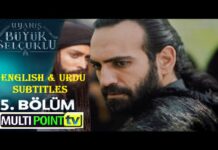 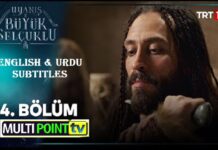 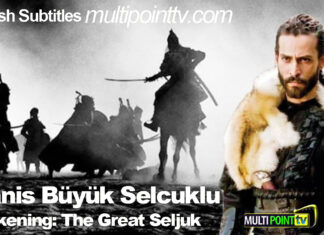