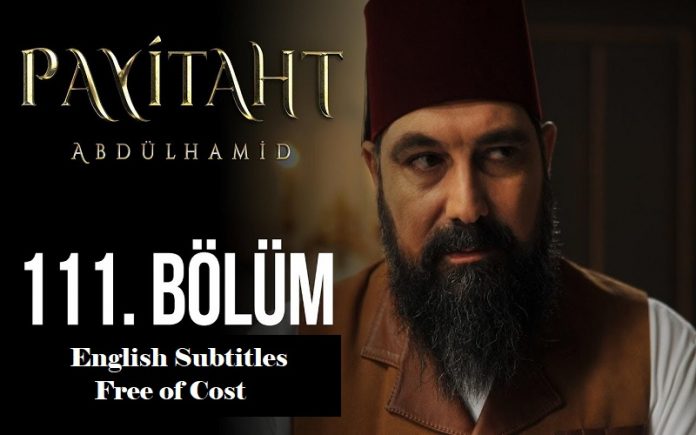 In Payitaht Abdulhamid Episode 110, Sultan Abdulhamid brings the secret organization together and starts the meeting. Hunkar says that Ahmed Pasha will explain everything and returns to the palace. Ottoman soldiers brought Zalman to the palace. Seeing this, Zuluflu Pasha and Selim Pasha take action immediately. Shehzade Abdulkhadir catches the scammer who uses his name at the market and tells the traders the truth. Later, Shehzade Abdulkhadir tells that Hunkar has already sent money and will help traders with this money. Bidar Sultan sees what his son is doing and regrets. Hunkar gives the chests he made in the carpenter workshop to Ismail Hakki Bey and asks him to sell them. Ismail Hakki Bey asks Hunkar why he wants to sell the chests. Hunkar says he will repair the walls of the tomb of the Prophet with the money from the sale. Hearing this, Ismail Hakki is very affected and gets emotional. Ahmed Pasha tells the members of the organization about the railway and asks where the Turks live. Zuluflu Pasha and Selim Pasha secretly come to the others and tell them that Zalman has been arrested.

In Payitaht Abdulhamid Episode 110, After the meeting, Ahmed Pasha comes to Hunkar and informs him about the railway route. Hunkar asks to investigate every place that belongs to Gustav. Tatar Bey and Nadir Bey set out to talk to sellers. Yanik is very angry and wants to take revenge on Halil Halid. Shehzade Abdulkhadir visits his mother. Abdulkhadir tells that he knows his mother was in the bazaar and how she believed in the slanders about him. Bidar Sultan talks about the money in Abdulkhadir’s account, but Shehzade Abdulkhadir does not know anything about it. Madame Blavatsky is still working on the pictures and symbols on the globe. But an armed group comes to Madame and kidnaps her. Tahsin Pasha and Mahmud Pasha come to Hunkar. Hunkar says that Mahmud Pasha was right about Gustav, and Pashas learn that Gustav is a traitor. Ahmed Pasha comes to the office while Zuluflu Pasha and Selim Pasha were trying to destroy the documents in Gustav’s office. After the research is over, Ahmed Pasha comes to Hunkar and gives the list he found to Hunkar. After reading the list, Hunkar orders the arrest of everyone on this list. The men sent by Yanik kidnap Asaf and Soghutlu. Nadir Bey and Tatar Bey are kidnapped at the same time. Shehzade Nureddin comes to his aunt, but Cemile Sultan says there is a misunderstanding.

In Payitaht Abdulhamid Episode 110, Shehzade Abdulkhadir says he will return to the palace, but Bidar Sultan does not want to go with him. Then Abdulkhadir says that Hunkar wants it and persuades his mother. Halil Halid comes to the palace and Hunkar asks him about the condition of the streets. Hunkar asks Halil Halid to secure the streets, and after this task is over Halil Halid will take a new mission from Hunkar. Yanik puts agents he has kidnapped in a room and locks the door with different keys. When Tahsin Pasha and Hunkar talk about the railway, Ahmed Pasha comes and tells that about 800 people have been arrested. Hunkar, who hears these, sets out to question Zalman. Hunkar asks Zalman questions, but Zalman wants to negotiate. Zalman asks what time it is. Selim Pasha says that the time has come and takes action to fulfill Zalman’s previous order. Selim Pasha enters the code room in the palace and sends a telegram after examining a book. He then breaks the telegraph machine and burns the notebook. The military unit that receives this password solves the meaning of the password and sends the order to bomb the Marseille port on a ship in the Mediterranean. Zalman says he did everything to start a war. Hunkar asks who he worked with in the palace, but Zalman does not say anything. The warship, which receives the message, starts moving towards Marseille. Tahsin Pasha comes to Hunkar and tells him the news of the attack.

In Payitaht Abdulhamid Episode 110, Hunkar realizes that Zalman has done this and sends Tahsin Pasha to the code room to cancel this order. Then Ahmed Pasha takes Zalman out of the dungeon and goes together. Tahsin Pasha goes to the code room and sees that someone has destroyed this room. Sabahaddin, Karasu, and Zuluflu think about what they can do to escape but Selim says that everything will be alright. Selim Pasha says that he sent a telegram from the palace and that Hunkar will release Zalman. Tahsin Pasha comes to Hunkar and says that they do not know the cancellation order and that the telegraph machine is unusable. Halil Halid finds the agents in a room but cannot open the door. The air in the room is getting less and less, and for Halil Halid, there is no solution other than going to Yanik. Ahmed Pasha takes Zalman to an unknown place and makes Zalman dig a grave. Zuluflu Pasha and Selim Pasha meet at the palace. Zuluflu Ismail Pasha tells that Ahmed Pasha was taking Zalman out of the palace. Hearing this, Selim says that he will make Zalman’s second order, that he will blow up the palace. Halil Halid goes to Yanik and asks for the keys. Yanik asks for money. Halil Halid says he will bring this money and set off. Bidar Sultan and Shehzade Abdulkhadir come back to the palace. Those who kidnap Madame Blavatsky ask her questions about the globe. Madame says she has not yet figured out the meaning of the symbols.

In Payitaht Abdulhamid Episode 110, Bidar Sultan comes to Cemile Sultan and asks about Zekiye’s arrival in the palace. Bidar Sultan gets angry with Cemile Sultan for hiding what she knows. Cemile Sultan defends herself and says that the suffering of Bidar Sultan is nothing next to her pain. Hunkar visits Zeki Pasha. Zeki Pasha tells Hunkar that he has been threatened. Hunkar tells Zeki that he knows everything and releases him. Halil Halid attacks Yanik’s men and tries to get the keys. Ahmed Pasha says that the plan about Zalman was being prepared and Hunkar wants to keep this plan secret. Meanwhile, Grun is caught trying to escape. Madame Blavatsky decodes the Hebrew script on the sphere. Madame and Anna attack the men who kidnapped them and escape from there with Marco’s help. Hunkar calls Pashas and starts talking to them about the railway, but Selim Pasha asks a question about Zalman. Hunkar says that he will not talk about Zalman’s capture and continues to talk about the railway. Cemile Sultan decides to send Gulcemal to Paris.

In Payitaht Abdulhamid Episode 110, Abdulkhadir goes to the library and sees Meziyet there. Halil Halid finds Yanik’s other men one by one and tries to get the keys. Hunkar gives the railway route map to Mahmud Pasha and says that they will show the map as if it was stolen as per their plan. Zuluflu Pasha tells Sabahaddin and Karasu that he is worried about Selim. Hunkar says they will find the traitor who sent the password. As Mahmud Pasha advanced with the map, a group of armed bandits stopped him and wanted to take the map. Mahmud Pasha resists them, but bandits steal the map. Madame and Marco come back to Society. Marco says there is no one to trust, and he must first learn this secret. After Marco leaves the room, Madame says she decrypted the code. Madame reads what she wrote to Anna and it turns out that the Ark of the Covenant was under the Yildiz Palace. The person driving Mahmud’s car comes to the palace and tells other Pashas that Mahmud Pasha’s bag has been stolen. Mahmud Pasha goes home and tells Frida that the map has been stolen. Tahsin Pasha comes to Hunkar and says that the plan has started. Hunkar goes to Ahmed Pasha and orders all armies to take the war order. Abdulkhadir goes to Meziyet and realizes that she wrote everything.

In Payitaht Abdulhamid Episode 110, Gulcemal faints after eating. Pashas go to Mahmud Pasha’s house and say get well soon. Zuluflu Pasha secretly goes to Frida and they talk about what Mahmud said. Frida does not believe in Mahmud and understands that everything is prepared to trap Selim. Halil Halid takes Yanik where the agents are and takes the key from him. Selim Pasha finds bandits attacked Mahmud Pasha and takes the map from them. Halil Halid opens the room door and takes his friends out one by one. Then Halil Halid puts Yanik in the room and starts a fire. Hunkar learns that Selim Pasha received the map. Zuluflu Ismail Pasha prepares to escape from the palace. The Ottoman ship enters the French waters. Selim Pasha hears that Zalman is dead and begins to go to the cellar of the palace. Hunkar and Ahmed Pasha set off after Selim. Selim comes to the explosives. Hunkar and Ahmed Pasha see explosives in the cellar of the palace and try to stop Selim. Selim says that he has to fulfill Zalman’s order. Hunkar asks Makhtar if he ordered the attack and learns the cancellation code from him. Tahsin Pasha immediately goes to the telegraph room to send the cancellation code. Hunkar tries to stop Selim. As soon as Selim fires the explosive wick, Ahmed Pasha attacks and cuts the wick. The ship receiving the cancellation order stops the attack and is withdrawn.

Without ads, permanent access to Payitaht Abdulhamid Season 4 Episode 111 and many more can be achieved by subscribing membership on Multipoint TV by Clicking below button.