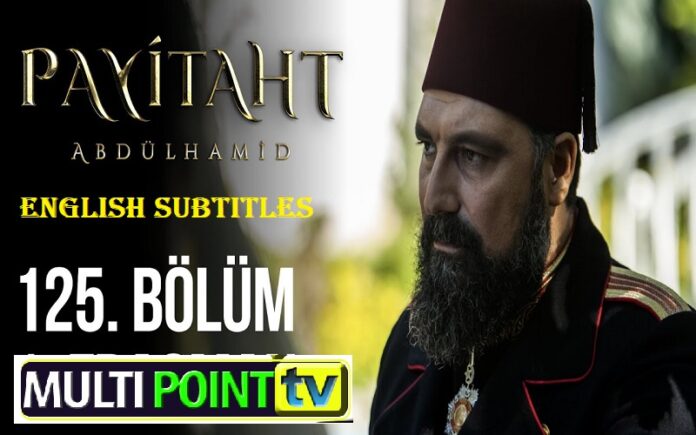 In Payitaht Abdulhamid Episode 125, Abdulhamid speaks to the soldier in charge to improve the situation in the house of exile and asks him to speak to the new government. Abdulhamid tells how he earned money and what jobs he was engaged in during his Shehzade period. The soldier says he spoke to the government but the government is in a difficult position. Later, the soldier says that the government wants Abdulhamid’s personal wealth. Abdulhamid agrees to give all his money to the government under certain conditions. Meanwhile, Abdulhamid’s younger son gets sick, but they cannot call a doctor to the mansion. Abdulhamid tries to heal his son. Then it goes back to when Abdulhamid was the Sultan. Abdulhamid reads the note from the bag and realizes that Ahmed Pasha is a traitor. Mahmud Pasha and Tahsin Pasha learn that Ahmed is a traitor. Sultan Abdulhamid says that he does not easily believe that Ahmed is a traitor. As Aliye is about to kill Bidar Sultan in her sleep, Fatma comes and stops her. Bidar Sultan sees Fatma leaving the room. Ahmed Pasha goes to the doctor and learns that his wound has healed completely. Tahsin Pasha begins to worry about Hunkar’s health.

In Payitaht Abdulhamid Episode 125, Sultan Abdulhamid asks questions about the weapons that came to Payitaht and tries to prove that Ahmed Pasha is not guilty. Later, Sultan Abdulhamid says that there is still a curfew in Thessaloniki and that this is why the masons will gather in Payitaht. Karasu and Isaac realize that they have to wait before they can hold a new meeting. Karasu says that Ismail Pasha is in a difficult situation but cannot help him. Zakaryan and Tatavlali learn that Esref Aziz kidnapped Leon. Soghutlu and the spies begin to question Leon and ask him why he came to Payitaht. Esref Aziz receives information from Yahya about Leon and realizes that the Armenians are planning about the labor organization. Fatma gets very angry with Aliye for what she did. Aliye believes that Hunkar Abdulhamid killed her father. Fatma tells that the truth has not been revealed yet and tries to calm Aliye down. Bidar Sultan asks why Fatma entered her room and gets angry with her. Fatma says she is not guilty, and Aliye defends her sister. Bidar Sultan blames Fatma. Sultan Abdulhamid calls Selim Pasha and once again asks what happened on the Thessaloniki train. Esref Aziz questions Leon and gets information from him about the Armenian plan.

In Payitaht Abdulhamid Episode 125, Ahmed Pasha realizes that no one in the palace trusts him. Sultan Abdulhamid and Ismail Pasha meet secretly. Ismail Pasha wants Ahmed Pasha to be arrested, but Sultan Abdulhamid does not want to do anything without being sure about this issue. Hunkar Abdulhamid secretly devises a plan and tells Ismail Pasha what he has to do. Fatma receives a message and realizes that the doctor wants to meet her again, but Bidar Sultan gets a copy of the message. Esref Aziz realizes that Leon will arrange boxing matches and bet on these matches. Soghutlu explains that the workers from the factory will bet on these boxing matches and this will affect the working condition of the factory. Hunkar Abdulhamid once again warns Bidar of her accusations against Fatma. Ahmed Pasha thinks why Hunkar doesn’t care about him despite all he has done and regrets this. Tahsin Pasha realizes that Sultan Abdulhamid is not eating and talks to him about it. Ismail Pasha goes out to buy newspapers, but someone argues with him because he is a mason. Ismail Pasha cannot take the man’s words any longer and shoots him. Zakaryan goes to Esref Aziz’s place and wants Leon back. Esref says that Nadir must attend boxing matches to give Leon. Mahmud Pasha hurries to Ahmed’s room and says that Ismail shot a journalist in front of everyone.

In Payitaht Abdulhamid Episode 125, Ahmed Pasha is very angry at what he heard and says he will do whatever is necessary about Ismail Pasha. Karasu and Isaac learn about the murder of Zuluflu Ismail Pasha from the newspaper. Karasu says that they need to hold a meeting urgently and that they should choose a new member. Abdulkhadir and Talat talk about the decisions made by Hunkar. Zakaryan and Tatavlali make betting plans about the boxing matches that Nadir will hold. Soghutlu and Nadir train for the upcoming boxing matches. Mahmud Pasha tells Sultan Abdulhamid what he said to Ahmed. Then Hunkar calls Ahmed. Mika wants to eliminate the Turks in the labor organization by using Leon. Sultan Abdulhamid tells Ahmed Pasha that he should not harm Ismail Pasha and that he will be judged fairly. Karasu writes a secret message and sends this message to Talat to publish. While Sultan Abdulhamid is having dinner with his family, he says that Zekiye will come to the palace the next day, but Fatma says that she wants to go to Pera. Karasu’s request annoys Talat.

In Payitaht Abdulhamid Episode 125, Abdulkhadir tells Talat that he should publish the secret message in the newspaper and talks about his banned newspapers Talat wants to distribute. Talat agrees to publish Karasu’s secret message in the newspaper. Sultan Abdulhamid says that the masons will hold a meeting in Payitaht to choose someone else to replace Ismail Pasha, and therefore they must find their secret message. Meanwhile, Ismail Pasha goes to the secret place and talks to an agent. Ismail Pasha says the Masons will hold a meeting and wants to know where this meeting will take place. The agent says that the masons are communicating with the newspapers. Talat publishes Karasu’s message in the newspaper. The workers go to where the boxing matches will take place and start betting. Nadir plays the first boxing match and quickly wins the match. Hunkar Abdulhamid and Pashas begin to examine the newspapers. Karasu goes back to Isaac’s office and tells him that the secret message has already been published in the newspaper. Isaac says that they will choose someone else to replace Ismail and establish the great lodge. Zekiye returns to the palace and talks to her family. Fatma secretly talks to the Italian doctor again and listens to him. Stefano says his father regrets what he did to Murad and wants to take Fatma somewhere. Zakaryan, Tatavlali, and Leon plot for Nadir to lose the boxing match.

In Payitaht Abdulhamid Episode 125, Sultan Abdulhamid continues to examine the newspapers without getting rest but finds nothing. Tahsin Pasha and Mahmud Pasha talk about how hard Hunkar worked. Naime warns her mother and tells her that Fatma is innocent. One of Bidar’s maids finds notes written in Italian in Fatma’s room. Meanwhile, Fatma goes to a printing house with Stefano and sees what is written about Abdulhamid. Fatma asks Stefano who assigned this task, but she cannot learn anything. Nadir Bey also wins the next boxing match. Bidar takes the notes in Italian and gives them to Selim Pasha to translate them into Turkish. In these Italian notes, it is written that Abdulhamid set up a treacherous trap for Murad to seize the throne. Fatma tells Aliye what she saw in the printing house. Aliye is very happy about this, but Fatma says she refused this offer. Fatma says she will tell Hunkar Abdulhamid everything and the truth will come out. Mahmud Pasha sees suspicious news in one of the newspapers and tells this to Sultan Abdulhamid.

In Payitaht Abdulhamid Episode 125, While Bidar is trying to accuse Fatma, Hunkar Abdulhamid says that Fatma tried to expose the fraudsters who prepared the reports. Sultan Abdulhamid sends his soldiers to the printing house that Fatma told, but he does not find anyone there. Aliye saves Stefano. Ahmed Pasha sees Ismail Pasha getting out of a car and shoots him. Tahsin Pasha tries to stop Ahmed. Ismail Pasha runs away at the last minute. Ahmed Pasha finds a note on Ismail Pasha’s jacket and goes to the address written there. Masons talk about Ismail Pasha, and they say that he is a murderer. Tahsin Pasha returns to the palace and tells Hunkar what Ahmed Pasha did. Selim Pasha goes to the secret meeting place with the soldiers to fulfill Hunkar’s order. Someone comes to the Mason meeting later and tells him that Ismail Pasha is a liar. The Masons panic and flee the meeting place before the soldiers arrive. Selim Pasha returns to the palace and tells that the Masons have already fled. Selim Pasha gives the masks that he found at the mason meeting to Hunkar. Zakaryan and Tatavlali realize that Nadir will win the boxing match, and they make a scene to stop him. Ahmed Pasha returns to the palace and says he shot Ismail Pasha. Sultan Abdulhamid asks Ahmed Pasha if he went to the Masonic meeting. Ahmed Pasha says he went to the Masonic meeting but did not see anyone there. Sultan Abdulhamid faints after Ahmed Pasha leaves the room.

Without ads, permanent access to Payitaht Abdulhamid Episode 125 and many more can be achieved by subscribing membership on Multipoint TV by Clicking below button.