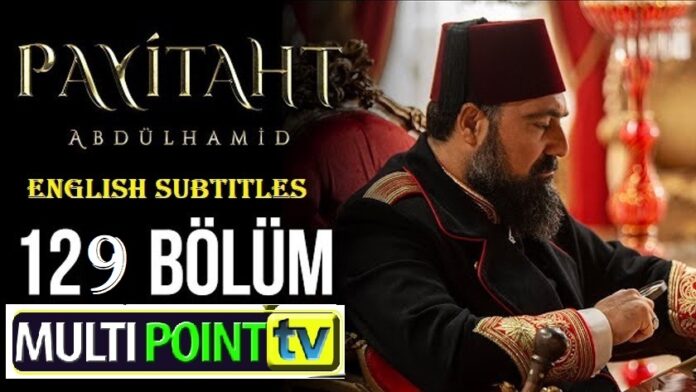 In Payitaht Abdulhamid Episode 129, Abdulhamid decides to exile his closest friends, and soon Bidar arrives. Bidar confesses her crime and tells that the Pashas are innocent. Abdulhamid is angry with Bidar for the exile of the deceased families and his closest friends. Abdulhamid calls a soldier and orders his friends to be brought to the palace. Bidar regrets what she did and is very upset. Bidar says that she has no other choice but to leave the palace and that she will go to Bursa. Naime tries to change her mother’s decision, but Bidar begins to collect her belongings. Bidar writes two letters and sends Fatma a gift before she leaves.

In Payitaht Abdulhamid Episode 129, Sabahaddin tells that the agent who came to the hotel has left and what happened in the port. Karasu is glad that his plan is successful. The next day, Tahsin, Mahmud, and Hakki come to the palace. Abdulhamid apologizes for his wrong decision. Abdulhamid talks about the families in Tripoli and tells them that Bidar is guilty. Meanwhile, the Grand Vizier comes and tells that some of the students were protesting. Abdulhamid asks questions about the news in the newspaper. Tahsin reads the letter from Zuluflu to Hunkar, and it turns out that Manyas is working for the mason Pasha. Abdullhamid remembers Ahmed talking to Manyas and tells him that he wants to talk to this secret agency. Hunkar then calls Selim and asks him to follow Ahmed. This way, Abdulhamid plans to understand who is a traitor. While Esref Aziz plans to find Tatavlali, Asaf comes and tells about what he did in Thessaloniki. Abdulhamid calls the soldiers from the Ertugrul regiment and asks them to secretly follow Selim and Ahmed. Ahmed escapes using the tailor shop as before and meets with Manyas.

In Payitaht Abdulhamid Episode 129, Ahmed says that Hunkar wants to meet with Manyas so that they can find the mason Pasha. Manyas understands Abdulhamid’s plan and says he will protect Ahmed. Mika visits Zakaryan and tells him that Karekin came to punish Esref. Tatavlali worries about Karekin’s arrival, but Mika tells him about his plan. Karekin and his brother make a scene in the port and kill the soldiers there. Abdulhamid learns that Esref has resigned and calls him to his secret room in the palace. Soghutlu tells what happened in the harbor and that Esref Aziz was called from the palace. Tatavlali comes to talk to Esref and tells him that Zakaryan’s older brother Karekin and Armen are coming. Esref Aziz then goes to the palace and listens to Hunkar. Abdulhamid asks Esref why he resigned and tells him that he will now work directly under Hunkar.

In Payitaht Abdulhamid Episode 129, Abdulhamid calls the soldiers following the Pashas and asks them what happened. Karekin arrives as Esref talks about new things to do in Three. Ahmed says he has not yet been able to speak to Manyas. Later, Selim comes and tells Abdulhamid what Ahmed did. Karekin tells that he will take revenge for what happened. Before leaving the palace, Bidar spoke to the people in Harem and apologized to them. Abdulhamid calls his most trusted friends and talks to them one more time about the wireless telegram they will install. Abdulhamid says that they will establish new wireless telegraph stations in important locations in the country and make a tender for the establishment of these stations. Hunkar then reads the letter written by Bidar. The Grand Vizier talks to other Pashas about the delegation to be established for tenders. Naime talks to her father and asks him not to let her mother go.

In Payitaht Abdulhamid Episode 129, Abdulhamid says he cannot forgive Bidar. Hechler meets with Isaac and gets information from him about the wireless telegraph stations to be established. Hechler asks Isaac to participate in the tender and goes to the palace to talk to Hunkar. Karasu says that one of the new stations to be established should be in Thessaloniki and Talat should be the manager of it. At Karasu’s request, Talat writes an article explaining how unnecessary these stations are, and this article is published in a newspaper. Hechler says he is against the new stations, but Abdulhamid says they do not have to get permission from anyone. Esref goes home and realizes that everyone has been kidnapped. Esref realizes the clue in the house and goes to the cemetery. Bidar speaks to Hunkar for the last time and tells him that she will leave the palace. Esref digs a grave and rescues Soghutlu. Isaac comes to the palace and offers to build new stations without asking for any profit.

In Payitaht Abdulhamid Episode 129, Hechler gives Isaac a paper showing that all of Isaac’s bank accounts in England are frozen and gives him a drugged tea. Bidar hugs Naime for the last time and leaves the palace. After the newly published article in the newspaper, Karasu calls Talat and asks him to make statements stating that he is against this article. Isaac comes back to the palace and tells Abdulhamid that all his commercial work is over because of what happened in England. Isaac faints soon after, and Hunkar calls the doctor. Esref goes to the next place and saves Nadir. Asaf unties the ropes that bind his hands and secretly goes to where Ali Osman is. Abdulhamid learns what happened to Isaac and tells him to participate in the tender by opening a company with a different name to get rid of Hechler’s threats. Karekin and Armen wait to kill Esref. Bidar sends the other letter she wrote to Saliha and invites her to the palace.

In Payitaht Abdulhamid Episode 129, Abdulhamid summons Hechler to the palace and warns him not to threaten companies that will participate in the tender. Ahmed meets with Manyas at a restaurant. Selim and the soldiers see this meeting and even listen to what they speak. The soldiers begin to follow Manyas. Asaf finds out where Ali Osman and Mehpare are and enters the house to save them before the explosion. Manyas enters a house with a telephone inside, and the soldiers see it. Asaf saves them before the explosion, and Esref arrives after a short while. When Karekin sees that the people in the house are saved, he takes a rifle in his hand and says that he will shoot Esref. Asaf sees Karekin and throws himself in front of the bullet to save Esref. Asaf dies in Esref’s arms. Talat says he is against the newspaper articles and defends Hunkar. Abdulhamid goes to the house where Manyas went and uses the phone there. Abdulhamid realizes that a Pasha is on the other end of the phone.

Without ads, permanent access to Payitaht Abdulhamid Episode 129 and many more can be achieved by subscribing membership on Multipoint TV by Clicking below button.