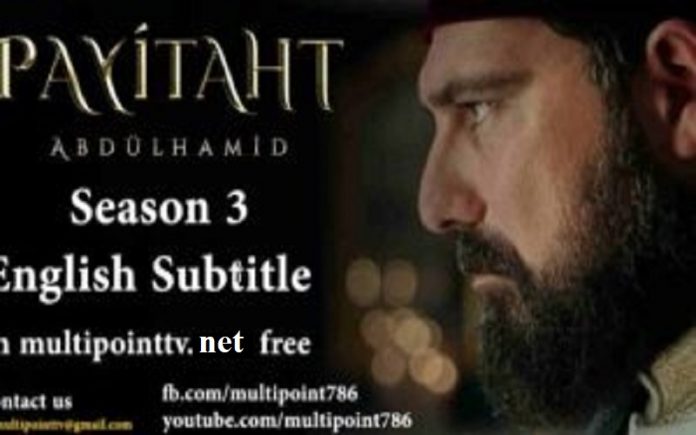 A meeting will be held in Reval to divide the Ottoman Empire, and Hunkar Abdulhamid tries to do everything in his power to stop it. Fuad and Shivenaz are trying to stop Abdulhamid. Meanwhile, Bidar Sultan becomes suspicious of the true identity of Shivenaz. Halil Halid meets Zeypep again and this situation exacerbates Zeynep’s love for him. Shivenaz tries to influence Naime and Abdulkhadir and trick them. To stop the talks in Reval, Abdulhamid decided to send Halil Halid to Russia, and Fuad leaked this decision. Halil Halid and Tatar Bey find an old friend as a prisoner in Russia, and Halil Halid sacrifices himself to save his friend. To establish his reign, Fuad begins to find the deficits of Abdulhamid’s loyal men and plans to draw them to his side. His first target is the Shkoder.

Bidar Sultan makes a plan to reveal the true face of Shivenaz. Meanwhile, Halil Halid moves on his own to clear the slander thrown at him. Vambery inadvertently puts his life in danger to save Shehzade. After Karasu’s offer, Sabahaddin started to get closer to Fuad and Shivenaz and nowadays Sabahaddin has taken a non-return road. Halil Halid still could not clear the slander thrown at him, and so Abdulhamid ordered Soghutlu to shoot Halil Halid. The events created by Sabahaddin destroy Seniha Sultan and Mahmud Pasha. Shivenaz makes an offer to Seniha Sultan to save Sabahaddin. Seniha Sultan, ready to do anything to save her son, accepts this offer. In the meantime, Vambery thanks to a drug that comes to himself and is determined to say the enemy’s name. Now Abdulhamid will learn the enemy inside the palace.

Things have become very complicated in the Balkan lands of the Ottoman Empire and almost a rebellion will begin. Fuad and Shivenaz want to find the secret organization of Abdulhamid in cooperation with Karasu this time. Karasu wants to kidnap Sabahaddin and use him as a ransom in exchange for the information he will receive. Because of the insistence of Seniha Sultan, Mahmud Pasha decided to send his son Sabahaddin secretly abroad. Shivenaz draws a picture of Fuad and this picture shuffles the mess. Abdulhamid sees this picture showing that Fuad is sitting on the throne.

The number of people trusted by Sultan Abdulhamid is decreasing every day. Realizing that his sister Seniha Sultan helped the kidnapping of Sabahaddin Efendi, Sultan tests his sister this time. Halil Halid captures Samuel, but when the British ambassador intervenes, Samuel is released and Halil Halid is arrested. Sultan Abdulhamid sends everyone whom he thinks betrayed him to the dungeon and thus begins to implement his plan. Shivenaz desperately seeks help to save Fuad. It turns out that Tevfik Pasha was slandered and Fuad was a traitor. Halil Halid escaped but lost Zeynep. Rothschild, on the other hand, comes to Payitaht with his most dangerous man, Edward Joris. The arrival of Rothschild will change all things.

Vambery is forced to work against Abdulhamid because of Rothschild’s threats. Tatar, Soghutlu, Nadir Bey, and Cezzar are looking for Joris everywhere. Bidar Sultan is confident that Shivenaz is trying to poison her, but she cannot convince anyone. Meanwhile, Victoria, who came to the palace, explains the true face of Shivenaz. While Rothschild, Vambery, and Fuad pursued the secret secrets of the Ottoman Empire, Sultan Abdulhamid set a trap for them. After Victoria’s words, Shivenaz is imprisoned and plans to destroy Bidar Sultan. With the pain of defeat, Rothschild makes a very dangerous plan. Rothschild now supports Sabahaddin and the Young Turks. Halil Halid finally takes Camgoz’s revenge. Joris, Ozanyan, and Garo act to eliminate Sultan Abdulhamid and Zeynep is about to become a victim of their attack. What happened to Naime deeply wounded Hunkar Abdulhamid and Bidar Kadin. As if that was not enough, Hunkar faced Mahmud Pasha. Seniha Sultan could not stand any longer and abandoned the Payitaht.

It’s time for Vambery to choose. He will choose either the side of the Ottoman state or the side of the traitors. Fuad, on the other hand, is waiting for the administration after Rothschild and Rothschild will choose another as the heir. Sultan Abdulhamid, who learns that one of the Pashas supports the Young Turks, calls Ahmed Celaleddin Pasha to the palace. Ahmed Pasha finds the betrayal pashas as his first mission. Joris wants to take over the neighborhood, but Halil Halid is looking for new ways to close the casino. Shivenaz’s uncle will tell Bidar Sultan everything and Shivenaz cannot stop it. Sultan Abdulhamid, who learned that Tahsin Pasha betrayed and helped the Young Turks, collapsed. Shivenaz makes a plan for Zeynep to marry Mehmet Selim and she lies about Halil Halid. Shivenaz’s mask will eventually fall because she is unable to do that.

Tahsin Pasha escaped and sold the secrets of the state. Ahmed Pasha is looking for him everywhere. The Young Turks, on the other hand, will try to kidnap someone from prison to get the support of the Armenian gangs. Zeynep thinks that it was Halil Halid who killed her sibling and therefore cuts off all contact with him. Sabahaddin is working with Young Turks and now he is part of a treacherous plan. Thanks to Abdulhamid Khan’s plan Young Turks can not get the support of Armenian gangs. A relationship begins between Naime and Akif, who writes in the newspaper, but Akif, who writes dissent at Robina’s coercion, will put Naime in a difficult position. Meanwhile, Shivenaz secretly gives Seniha Sultan a poison, and Seniha Sultan starts to lose her mental health.

Akif learns the true identity of Naime and this opens the gap between them. Rothschild comes back to Payitaht when things don’t go as he wants. Sultan Abdulhamid is trying to find his former members of the parliament and disrupt Rothschild’s plan. Halil Halid tries to find the kidnapped chemist to stop the heroin trade in Payitaht. The British navy ships are on their way to bomb the Payitaht, and the only way to find out is the former deputies who have been kidnapped, and they are in Vambery’s hands. Rothschild must find the abducted former deputies to obtain Abdulhamid’s documents because he can only save himself with these documents. Vambery tries to use this helplessness of Rothschild, but Rothschild gives him away. Someone with the nickname attorney emerges and turns their plans upside down. Meanwhile, the British ships are still coming to Payitaht and Mahmud Pasha goes to one of these ships to save time. Vicino stole the map of the Temple of Suleiman and holds Sander, Joris’ son, as a hostage.

Shivenaz, who was thrown into the dungeon after his father Rothschild gave up, was sentenced to death. Abdulhamid Khan stopped the ships coming to Payitaht, but this made Rothschild and Sabahaddin even angrier. Vambery’s mask has fallen and he has been thrown into the dungeon as a traitor. Sabahaddin is preparing for a revolution and wants to eliminate the first army for this. Shivenaz awaiting the execution day in the dungeon becomes a Muslim. Although this situation makes Bidar Sultan very happy, Seniha Sultan still does not trust her.

Season finale. Halil Halid interrogates Joris to find his men, but Joris doesn’t say anything until he sees Robina. Sultan Abdulhamid knows that Rothschild will make a revolution by using the second army, but he needs more information to stop it. Rothschild is kidnapped by anonymous persons and taken to Hungary. Rothschild and Vambery try to understand what is happening in surprise. Sultan Abdulhamid does not know where the enemy will attack and plans a counterattack to stop them. For this attack, a secret organization in the old lands of the Ottoman Empire was implemented. If Rothschild and Vambery do not provide information about the revolution, this secret organization will destroy their workplaces and their entire capital in eastern Europe. Abdulhamid gives the pashas the task of finding revolutionary soldiers in the army. Meanwhile, Shivenaz hurts Naime and prepares to carry out a massacre at the place where she calls other sultans, saying that she will do charity work. Bidar Sultan understands this and asks the soldiers to capture Shivenaz. Shivenaz pulls out her weapon and takes Bidar Sultan hostage.

Meanwhile, Shehzade Abdulkhadir, who came there, shoots Shivenaz and saves his mother. Halil Halid shoots and kills Joris after rescuing his men. While the soldiers were preparing for the revolution, Sultan Abdulhamid decided to stay in the palace. Rothschild learns that his bank in Vienna will be demolished and gives the key to his safe, which contains all the information about the revolution. The armed conflict begins in the first army barracks. A defensive line was set up in the garden of the palace as the soldiers rebelled gradually approaching the palace. Hunkar sends his family and relatives to the shelter of the palace. Mahmud Pasha and Tahsin Pasha are shot while trying to stop two soldiers going to burn the Harem. As the rebels marched, Ahmed Pasha was shot and fell to the ground in the garden of the palace. There is no longer an obstacle for the soldiers to enter the palace. Hunkar and Shehzades start shooting. The soldiers set the harem on fire and the smoke covers the whole palace. Mehmet Selim and Abdulkhadir, who could not stand the smoke anymore, pass out. Bidar Sultan leaves the shelter and comes to Hunkar but finds Hunkar unconscious. Bidar Sultan faints and the episode ends. What will happen next? Will Hunkar and his family die? Is this the end?

Without Ads permanent access to watch Payitaht Abdulhamid Season 3 with English & Urdu Subtitles can be achieved by subscribing membership by clicking blue button.

But who can’t subscribe and searching for watching Payitaht Abdulhamid Season 3 with English Subtitles free of cost, they should click below green button.

But who can’t subscribe and searching for watching Payitaht Abdulhamid Season 3 with Urdu Subtitles free of cost, they should click below green button.