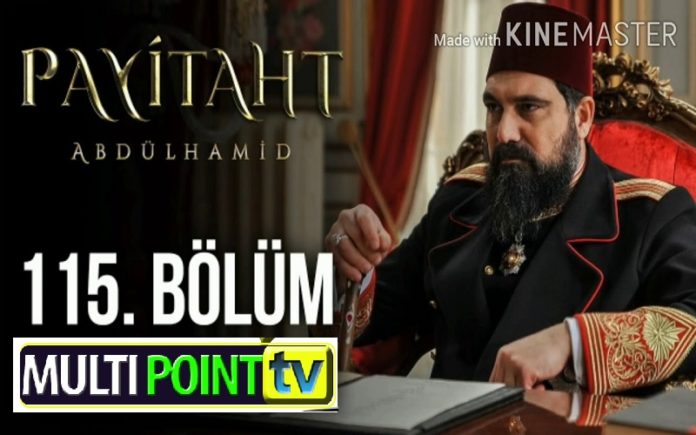 In Payitaht Abdulhamid Episode 114, Sultan Abdulhamid Khan sends troops to Aqaba because he has legal proof. While Hunar is talking to Tahsin Pasha, there is news that Mahmud Pasha has fled. Ahmed Pasha tells Hunkar that Mahmud Pasha may be innocent, but Hunkar has doubts about what Zuluflu said. On the other hand, Hunkar wants to safely send Robert and Brain to an island. Hechler is angry with his defeat. Meanwhile, Goldschmidt says he knows where Mr. Brain is and asks for permission to kill him. Hechler says that he will use the Brain as much as possible and kill him after that. It turns out that Hechler snatched dynamite from the ship that came to the port. When Halil Halid and the agents leave the port, they see a group of soldiers. Halil Halid talks to the soldiers and a soldier says that these dynamites are the training of the military school. Mahmud Pasha talks to Frida about what happened and says he suspects Zuluflu Pasha. Frida says she is the daughter of Karasu and says she will help Pasha. Mahmud Pasha makes a plan to see if Ismail Pasha had set a trap for him. Bidar Sultan sees Naime sadly coming to the palace and asks Gulcemal what happened.

In Payitaht Abdulhamid Episode 114, Halil Halid and Ahmed Pasha talk about the agreement, and then Halil Halid informs him about the dynamites he saw in the port. Goldschmidt goes where the dynamites are and talk to Namik. Goldschmidt kills soldiers who bring dynamites. Bidar Sultan comes to Zekiye and gets angry with her because Bidar thinks that she gave the message from Kemalettin to Naime. Zekiye tells her that she has not done anything and asks what Naime said to that man. Mahmud Pasha goes to Ismail Pasha’s house and tells him that he is innocent. Mahmud Pasha wants some time and says that Tahsin Pasha has made him fall into this situation. Ismail Pasha says that he trusts Mahmud Pasha and will be safe in this house.

In Payitaht Abdulhamid Episode 114, Hunkar and Tahsin Pasha talk about the betrayal of Mahmud Pasha. Hunkar praises Tahsin Pasha for his loyalty. As Ismail Pasha goes to the palace to report Mahmud, Frida stops him and tells Mahmud Pasha’s plan to him. Bidar Sultan goes to Naime and asks her questions. Naime tells all the facts to her mother and tells that she did not meet Kemalettin. Ahmed Pasha meets Mr. Brain and says he’ll take him somewhere. Robert comes in with a car. Halil Halid talks to Tatar about the soldiers he saw at the port and Tatar understands that these soldiers are Armenian. Goldschmidt tells Hechler what happened. Hechler gives him a small pistol and asks Goldschmidt to give it to Robert. Ismail Pasha comes back to his home and Mahmud Pasha believes that Ismail Pasha did not report him.

In Payitaht Abdulhamid Episode 114, Ahmed Pasha gives some money to Brain and Robert, and Goldschmidt and his men attack them from a distance when they are about to send them. Selim takes Brain and goes away from there. Robert takes this opportunity and goes to the street. Goldschmidt and Robert speak secretly. Goldschmidt gives him the weapon sent by Hechler and asks him to kill Hunkar. Robert says this is impossible because everyone who will see Hunkar is checked before. Robert comes over to Ahmed Pasha and says he just goes to hide. Frida talks to Hechler. Hechler tells her that they will kill Mahmud Pasha. Madame Blavatsky continues to plan about the purchase of stores around the Al-Aqsa Mosque. Meanwhile, a scientist called Andre comes to see Madame. Andre is a man who makes biological weapons and wants to launch an epidemic disease in the Ottoman territory. Tatar comes back to the shop and tells them that he may have found the houses they were looking for. Halil Halid and the agents set out to go to these houses. Bidar Sultan goes to see Zekiye apologize, but Zekiye Sultan blames her for controlling her children. Ahmed Pasha talks to Hunkar about the attack. Goldschmidt tells Hechler that he was unable to deliver the gun to Robert. Hechler says he plans everything. Halil Halid and Soghutlu go to the funeral of one of the killed men but Namik comes there. Namik says they are responsible, but Halil Halid begins to chase him. Namik enters one of the houses on a dead-end street.

In Payitaht Abdulhamid Episode 114, Tahsin Pasha gives documents to be signed to Hunkar. While reading these documents, Hunkar learns that Tahsin Pasha no longer wants to receive a salary. Hunkar asks Tahsin Pasha why he wants this and they start talking. Tahsin Pasha says that he does not serve the state for money or fame, and convinces Hunkar to do so. Hunkar then eats with his family and talks with them. Zuluflu Ismail Pasha secretly meets with Hechler. Hechler gives him the box with the little weapon in it and asks him to give it to Robert. Ismail Pasha accepts this task without knowing what is in the box. Halil Halid and the agents enter the houses on street one by one to find out where the dynamite is. Shehzade Abdulkhadir thinks about Meziyet and Naime notices this situation. Ismail Pasha meets Robert at the palace and gives him the box that Hechler sent. Goldschmidt sends Diana a message and tells her to give it to the newspapers. As Hunkar and Pashas walk in the garden, Robert slowly approaches them. Then Robert pulls out his gun and everyone in the palace hears a gunshot.

In Payitaht Abdulhamid Episode 114, Bidar Sultan and those in the palace panic because of a gunshot. Zulfet tells that Hunkar has been assassinated. A soldier sees Halil Halid and says there is a gunshot at the palace. Halil Halid takes all the agents and runs to the palace. Meanwhile, all newspapers report that Sultan Abdulhamid died as a result of an assassination. When Mahmud Pasha, who reads this news, sets out to go to the palace, Frida stops him. Ahmed Pasha brings Halil Halid to Hunkar’s secret chamber and tells that Hunkar is alive. Ahmed Pasha says that Robert is a traitor and was trying to kill Hunkar. Meanwhile, Hunkar comes and tells that Ahmed Pasha is doing what he needs. Halil Halid talks to Hunkar about dynamites. Halil Halid advises Hunkar not to leave the palace because Hunkar will be assassinated with dynamites that came to Payitaht. Hunkar and Pashas talk about news in newspapers. Hunkar says that he will see the public so people can learn the truth. Hunkar asks Tahsin Pasha to speak to the newspapers. Hunkar decides to send troops to Dolmabahce palace so that his heir does not make a revolution. Meanwhile, Hechler comes to the palace. Hunkar goes to Harem to see his family.

In Payitaht Abdulhamid Episode 114, Hechler talks about Aqaba and asks Hunkar to withdraw his troops from there. Hechler says that if the soldiers do not pull out, British ships will go there, but Hunkar says that if the ships go to Aqaba, they will be sunk by artillery troops. Goldschmidt gives the dynamites to Namik and asks him to place them in a mosque. Frida talks to Hechler once again. Hechler asks Frida to bring Mahmud Pasha to the port. Zekiye Sultan goes to the address she learned and tells the woman there that she wants to pray. Bidar Sultan leaves the palace to distribute aid and tells everyone that Hunkar is alive. Madame and Andre give medicine to abducted people. Andre says he made a deadly virus and will soon spread it to Payitaht. Frida goes where Mahmud Pasha is and tells him that she will let him escape him with a ship, but an unknown source conveys this news to the palace. Zekiye talks to the woman in the house where she goes to and finds out that her husband’s name is Ali Nureddin. Bidar Sultan and Naime see Zekiye when she leaves the house. Zekiye can’t bear anymore and faints. Ahmed Pasha and Selim prepare at the port and wait for Mahmud Pasha to arrive. Meanwhile, Mahmud Pasha came to the port and got in a car. This car stands next to the big boxes and Mahmud gets out of the car. Mahmud enters a big box.

In Payitaht Abdulhamid Episode 114, As Ahmed Celaleddin Pasha walks to Mahmud Pasha, the box explodes. Ahmed Pasha comes back to the palace and tells that Mahmud Pasha has come to the port. Ahmed Pasha continues to explain the events and tells Hunkar that the box is blown up and the body they find is unrecognizable. Naime Sultan sends an agent to find out who lives in the house where her older sister went. Hunkar orders a state ceremony for Mahmud Pasha’s funeral and tells him that he will go to his funeral. Halil Halid and agents think that dynamites are used to kill Mahmud Pasha. Naime learns that Ali Nureddin paid the rent. Goldschmidt is excited to know that Hunkar and state officials will die in the mosque. Hechler asks Ismail Pasha not to go to the funeral. When Hunkar and Pashas are about to go to the mosque, Ismail Pasha says he feels bad and stays in the palace. Asaf catches Namik and learns the explosion in the mosque. Asaf runs to Halil Halid and tells him what he has learned. On the way to the mosque, Hunkar and Tahsin Pasha talk about Sabahaddin.

Without ads, permanent access to Payitaht Abdulhamid Season 4 Episode 115 and many more can be achieved by subscribing membership on Multipoint TV by Clicking below button.

Have you Enjoyed Episode 115? 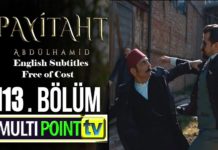 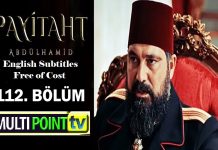 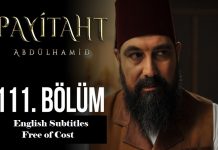 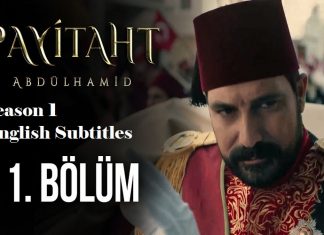